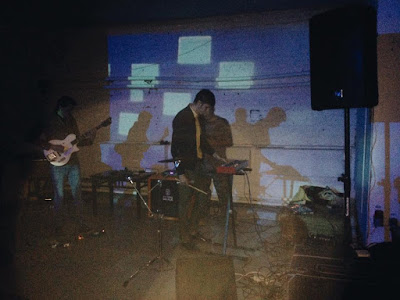 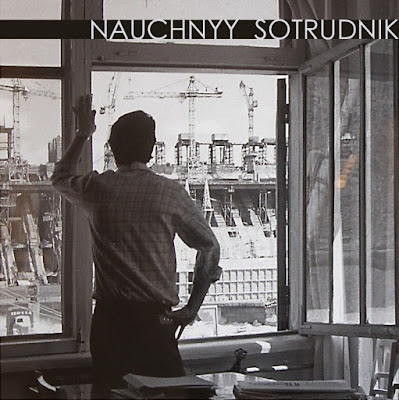 Q: When Sotrudnik Science Start? Tell us about the history of ...
The project was created after my departure from the previous group. I wanted to do something different, there are a lot of text and music. Name of the group took the first songs written. For a long time I was looking for a partner, as a result they became an old friend of Evgeny. He plays the guitar and I sing and play on synth. It also works on a drum machine. Evgeny a very unusual style of play, at the junction of the surf and psychedelic, it creates our unique style. His contribution to our location is priceless. The project is only one year.

Q: Who are your influences?
It so happened that all my childhood I listened to black metal and death metal. Already in the 13 years I started to play in a punk band, and later hardcore. Most recently, I became interested in electronic music.

A lot of music influenced me, and if you choose its Russian group: "Гражданская Оборона", it is a true and real artist of the Soviet Union, and then Russia.
If the choice of overseas it: Kraftwerk. I read a book about them, and was impressed. All sources of post-punk music coming from them. They are better.

Q. Make a list of five albums of all time ...
1. "Гражданская Оборона - Мышеловка"
In 1987, the leader of the group Letov himself wrote and recorded 5 albums. I love them all, and they are for me the best of his discography. "Мышеловка" opens a series of albums.

2. "Кино - Черный Альбом."
Although pop music, but the most favorite of the album for me. All the music is brought to the ideal. Unfortunately, the last album of the band after recording before leading publishing group crashed in a car accident.

3. "Ария - Игра с огнем"
This is an album that I started listening to rock music, in about 10 years. I listen to it until now with great pleasure.

Well, a couple of albums that have influenced our time:

4. "Kraftwerk - Die Mensch-Maschine".
Driven to perfection the style and image of the group. This is my favorite song Das Model

5. "Oppenheimer Analysis - New Mexico"
He heard the first album in the style of minimal wave, and after I became interested in electronic music, minimal synth, coldwave and so on. I like to label Vasicka "Minimal Wave", and I love all of their releases. This is their very first and best release.

Q: How do you feel to play live?
I act as I have said on the stage for 13 years. For me it is normal. But here, of course, new emotions, a new style of music, new listeners. This is all very interesting, I like the direction in which we are moving.

Q. How do you describe Nauchnyy Sotrudnik sounds?
It is ironic project, in the texts of many of sarcasm, irony, even the music gives. It seemed to smile and cry at the same time. The texts I pick up different themes, Gulag, dissidence, imaginary intellectuals. But it's not served in the darkest colors. In our texts, there is a place for reflection and discussion.


Q: Tell us about the process of recording the songs?
The songs we write in the porto studio directly to rehearsal. We use only real musical instruments, drum machines, synths. No computer effects. Mastered by our friend, DJ and musician Sunko.

Q. Which new bands do you recommend?
In Russia, we signed the Moscow label "Sierpen Records". I note that all of the groups on it, it's a real post-punk without cuts, they began the revival of this style in Russia, as our scene filled various pop post-punk projects aimed at the destruction and creation of this style. If you select a group that is: Sierpien, Предсмертная Кадриль (Ukraine), Счастливая Смерть, Капитан Ненавидит Море. Also note the label "Издательство Сияние" and groups: Июльские Дни, Черная Речка, Особые Условия. From our city, I note the new-wave group "Будни", it is a project of my good friend.

And from abroad more than inspired by the German and French minimal synth from 80"s. And modern-day black metal: Mgla, Batushka, Ash Borer, Panopticon, Wiegedood.

Q: Which band would you love to made a cover version of?
We have already done a cover of a group "Огонь". This legendary Moscow's post-punk band from the underground movement in the 90s "Формэйшен". We are very encouraged by these groups, I will mention a few: Соломенные Еноты, Банда Четырех, Огонь, Ожог.

Q: What are your plans for the future?
We are currently writing songs for a full-length album, two of it is already available on bandcamp. A couple of weeks ago we successfully visited with concerts Moscow and St. Petersburg. We want to Eastern Europe, as the Russian language there are many of you know.

Q: Any parting words?
Thanks for the interview, can see you you never know!
*
*
*
Thanks