Caustero with Instant Lake - An Interview 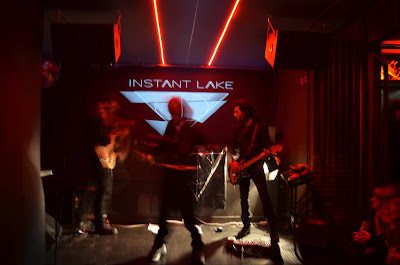 1Q. When did Instant Lake start? Tell us about the history...
Pierluigi M. Grauso: In the autumn of 2014, Dario Amoroso (synth/ drum machine) and me (guitars) started to rehearsal together in Caserta. We had collaborated together before just for fun and experimenting in Diae Irae and Cupio Dissolvi, after Dario’s former band Lads Who Lunch had split; I had played guitar in various bands of the dark wave local scene, the latest was The House of Dolls.

Pierluigi: Me too..uhmm Right I think it’s not so important.

Dario: I was just curios

We co-founded the Instant Lake and named the band by searching on an on line name generator which suggested two words: Instant and Lake. We chose both.

Daniele Landolfi: In april 2015 I had just interrupted the activity of my old band 100 Club. Pierluigi asked me to join him and Dario and arrange together some songs. Thereafter we re-recorded demos of four tracks with new lyrics then published the single Caustero on Soundcloud. As a result some labels producers contacted us asking for more songs to listen to and possibly sign Instant Lake for an album.

In June 2015 Ago Giordano asked us to open a gig at Cellar Theory club in Naples but we fell through at the last moment for an accident.

Carlo Landolfi: I joined Instant Lake as a bassist a few weeks later – I came from a neapolitan punk band called Lo Sciame. We added two new songs and two covers to the early stuff and finally debuted on 28 December of the same year at Sossio Lupoli’s Jarmusch club in Caserta.

Daniele: It was a good debut though we got the soundcheck wrong: the venue was much crowded and we hardly could listen to what we were playing. Hereafter we booked other gigs around. We also replayed two more gigs at Jarmusch club during the next year.

Pierluigi: In March 2016 Ago invited Instant Lake to open the Evil Fest, an important goth/dark wave festival taking place every July in Italy at Alvignano, Caserta.

We were in touch with some labels and a few weeks before the festival we came to an agreement with Alex R. Borges to release an album on brazilian Wave Records. So we worked hard over those months to arrange our songs while keeping playing live.

Caustero was just complete so it became our first issue. The digital single has been released on Wave Record on 23 december 2016, plus the video of the single (on Youtube) produced by SNAIL, written by Adriano M. Poledro and Luigi Reccia. We also released a digital remix of the single, Caustero Paolo Favati Remix at Blue Velvet (both the single and the Remix are on line on Bandcamp).

Daniele: I had no doubt to contact Paolo Favati to remix our single. Our brothership started in the early 90’s when Paolo (a Pankow member) joined the 100 Club as producer and musician. We have always kept in touch and this official release was finally a real chance to work together again.


2Q: Who are your influences?
Dario: I’d say we are influenced by Liars, Cold Cave, Joy Division, Place To Bury Stranger.

Carlo: By my opinion our group is influenced by Depeche Mode, Joy Division, Suicide, Christian Death, Bauhaus, Death in June.

Daniele: Personally I couldn’t escape so many across punk, new wave, ebm/industrial… We all listen to loads of old and recent different music and that’s why we have a sort of eclectic sound.

3Q. Make a list of 5 albums of all time…
Dario: My 5 all time albums would not be inherent with our genre. Anyway: NIN ‘Fragile’, Smashing Pumpkins ‘Mellon Collie and the Infinite Sadness’, David Bowie ‘Space Oddity’, Radiohead ‘Ok Computer’, Cure ‘Disintegration’

Carlo: I put the album so to speak, it’s a miscellaneous.

Pierluigi: Me too, any way they are serious. I made a flower child list…The latest is Metallica, 1985 I guess.

Carlo: Oh My… How could you?

Pierluigi: You can from bed. I was about to say Nirvana.

Pierluigi: Dead Can Dance was right. And GG Allin

Daniele: Beatles ‘Revolver’, Pink Floyd The Piper…’, but!... I could mention Black Sabbath ‘Paranod’, King Crimson ‘In the court…’; and Sex Pistols.

Carlo: Master of Reality woow! B.S. too. Geezer Butler was really something. Daniele: Hard choise… I’d say a Velvet Undeground & Nico too and Stooges: Lou Reed and iggy Pop were my fav as a teen. The goes without saying The Ramones.


4Q. How do you feel playing live?
Carlo: I feel drunk

Daniele: Are you sure you feel or you are?

Carlo: I feel cause I am.

Pierluigi: A sensation of nausea. Repugnance

Carlo: Boredom. When I play Laura Palma I get excited

Pierluigi: It causes impotence to me. It depends on the audience though.

Pierluigi: And you are…Incontinence can often be healed

5Q. How do you describe Instant Lake sounds?
Dario: I’d describe our sound as Dark Wave with Indie/Synth Pop influences.

6Q: Tell us about the process of recording the songs ?
Dario: It’s about developing a formal organization from riffs we created shooting the shit.

Daniele: The early songs were just complete having a well defined, with Pierluigi’s and Dario’s vocals resembling scat. On Caustero I just re-wrote lyrics and changed vocal lines, adding parts where I need to. Musically I just suggested a few ideas for the music to fit to my vocals. On other tracks I also saved some Dario’s vocoder old parts.

The new line up with Carlo on bass meant a more powerful sound, adding new songs, furthermore a new way of composing: we all share our own new songs with the band, then each of us could add or rearrange the primitive ideas, depending on the case. We record both midi and analogic instruments parts on computer so that we can easily add riffs or re-model the structures. That’s more complex now though. Songs on the album went through this process. For the live activity we mostly rehearsal in three and have intensive sessions when Dario is back in Caserta.

7Q. Which new bands do you recommend?
Dario: Anew band I recommend Jamie XX , nothing to do with our genre though. Carlo: A new band I suggest is Le Er Est… they’re not so new though.


8Q: Which band would you love to made a cover version of?
Daniele: Initially we covered ‘She’lost control’ an ‘Bela Lugosi’s dead’. Lately our track line is longer so we don’t play them anymore or we only play the former.

9Q: What are your plans for the future?
Pierluigi: Future? Happyness and peace

Daniele: Yes, before we die hopefully… Well, next issue will be the video of Caustero Paolo Favati Remix. It’s going to be out in the next days. Then we’ve just mixed the album at Bartolomèh B Art Giuliano’s Hopeland Studios. Now he’s getting to the point with the mastering. Wave Records will release it within January 2017.

Pierluigi: Then we should play live and promote the album.