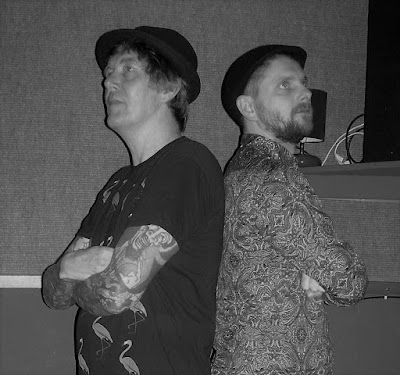 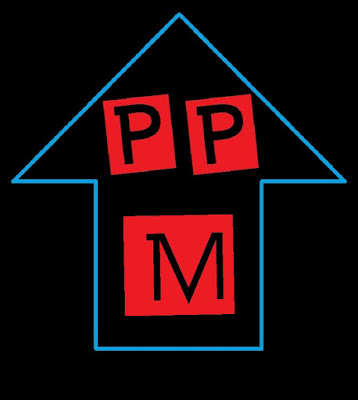 Q. When did Personal Propaganda Machine start? Tell us about the history...
Ross: We actually met at work a few years ago when we worked within the same department. I knew that Ian was a musician - the guitars he occasionally brought in, along with the band posters behind his desk, were a bit of a giveaway. One day I went to buy an HH Electronics guitar amp from a shop off Portobello Road, for which I'd been searching for a while, and told him about it the following day. Turned out that not only was he aware of these amps, despite them being long out of production, but that he had owned more than one in his time. And so the seeds were sown for PPM.

Ian: Unusual haircuts and white shoes ! ... those are my earliest recollections of Ross at work. We all had to dress smartly (perhaps substitute boringly for smartly - it's much closer to the reality) but Ross somehow always managed to keep a little bit of his individuality with him at all times in our monochromatic (Metropolis on a bad day!) work environment - I felt that he surely must be very much into music, either listening to and / or playing it via some instrument or the other. Once we did get the chance to chat it quickly became evident that we were both passionate about music - which included the making of as well as the listening to and as an added bonus we discovered that we both liked the same bands too. We exchanged CDs and videos of our musical efforts and our 'musical friendship' grew from thereon. I was always impressed by the loose, relaxed style that Ross had on the guitar and enjoyed his keyboard work too as it was invariably interesting and 'individual' (like the hair and shoes I suppose?!), I always hoped we could combine musically as I truly felt that something good would come from it - and, in the fullness of time, PPM happened!

Q: Who are your influences?
Ross: One of the bands that we bonded over was Kraftwerk and it turned out that we shared a love of electronic music. So the Krautrock thing was fairly instant, and that goes for stuff like Neu! and Tangerine Dream, who I personally feel have been a bit overlooked compared to a lot of the others from that genre, despite their prolific output. We both liked stuff like Soft Cell and I know Ian was into The Orb. So in a sense, there is a progressive influence (also worth noting that Ian's favourite band of all time are Led Zeppelin), along with a pop sensibility at times. Besides that, I am hugely into shoegaze and post-punk, and we both like the Cocteau Twins, which I think you can hear very clearly from the six string bass.

Ian: To confirm - definitely 'all of the above' for me! I think I'd also add Hawkwind - in particular their first three albums.

Q. Make a list of 5 albums of all time…
Ross: Very, very difficult to narrow it down along with the fact that lists of this kind are likely to change on a daily basis. But seeing as you're holding me at gunpoint, the five I shall nominate as of now are
'Kiss Me Kiss Me Kiss Me' by The Cure,
'Souvlaki' by Slowdive,
'Low' by David Bowie,
'The Virgin Years' box set by Tangerine Dream
and 'Louder Than Bombs' by The Smiths.

Ask me again tomorrow and I will have a different answer.

Ian: Oh dear, that's one of those 'toughest questions that you hope nobody ever asks' isn't it?? Anyway - in no particular order:

Led Zeppelin II as it was the first album I ever owned (at the time, I hadn't heard it but liked the cover so I thought ... "I'm going to buy it" ... honestly - how shallow is that for goodness sake???).

Van Halen (1) - Ushered in a new approach to mainstream rock guitar lead playing ('tapping'). Although the tapping technique had been used for centuries (even by Hendrix on occasions) it was Eddie Van Halen that did bring the style into everyday use - Van Halen 1 was a mind-blowing guitar virtuoso tour de force.

Tubular Bells - a really unusual (at the time) concept that seemed to stay in the album charts forEVER, unfortunately also used for The Exorcist so, sadly, I still get these creepy mental visions of horrific yukkiness every time I play it!

Dark Side Of The Moon - talking about albums that stayed in the charts forever ... but as undoubtedly epic as this album was (is) I always preferred the wackiness of the - woefully short - Syd Barrett era.
Oh no - I've done my five ... there's no way I'd be allowed to mention Autobahn now - shame!

Q. How do you feel playing live?
Ross: For me personally, playing live is the only time where I feel completely myself. If I don't play live for an extended period of time, I tend to go slightly mad.

Ian: Playing live feels like it's exactly the thing that I should be doing, it feels so 'right'. I'm unfortunately passionate in my hope that everything will sound and go well so am prone to an understandable level of care-tension beforehand but once we're on our musical way and nothing appears to have been mucked up, blown up or disintegrated then I can relax and have the best time(s) of my musical life. If all's gone well then I reckon the feeling you get afterwards is hard to beat too.

Ian: I definitely can't argue with that!!


Q: Tell us about the process of recording the songs ?
Ross: This one should really be answered by Ian. He records the bulk of the music and then I add six string bass and vocals.

We are really fortunate to have an excellent range of hardware and software synths (nearly 70 at the last count). Each one has its own character and will generally inspire one or two songs so we're definitely not stuck for ideas! At the moment we have enough songs written (and at a recorded stage ready for the final vocal / bass tracks) for, at least, 3 full albums .... now if we only had a bit more spare time to finish recording them ....

Recording-wise we use Sonar (Platinum) and a Tascam DP32 SD. Soft synth (and soft drum-box) tracks are recorded using Sonar; once the layers have been built up they are all exported to the Tascam and then the 'hardware items' (bass, guitar, vocals, hardware synths / drum-boxes) are then recorded in the 'old fashioned way' to give things a more 'human' feel rather than working exclusively in Sonar and going the sample phrase / copy / paste route. Once complete then the whole mess is exported back into Sonar from the Tascam for final processing.

If we are only using a hardware synth for a particular recording then we will bypass the initial Sonar stage and record straight to the Tascam, but ultimately it will still all end up in Sonar for final processing. We really do feel that the 'old and new' ways of recording actually working in combination is ideal for us as it gives a great mixture of machinelike dependability / predictability (Sonar tracks) and a 'human feel' (Tascam tracks).

Q. Which new bands do you recommend?
Ross: Too many to mention. The beauty of the here and now is that there are so many bands doing interesting things. The problem is that there are so many of them that it's impossible to investigate absolutely everything, and more often than not, loads of the good ones never get the platform or the recognition they deserve. I must recommend You The Living though; they're an electronic two piece who, although they don't sound anything like us, the music comes from a similar place spiritually I would say.

Ian: I must admit that I don't listen to much, if any, non-PPM music at the moment - I like to keep a 'clear head' so that any ideas that come aren't because of "something I heard sometime but forgot it was someone else's and thought it was mine"!

Q: Which band would you love to made a cover version of?
Ross: Either Carole King or The House Of Love for me.

Ian: Wouldn't it be brill to do a PPM Kashmir!

Q: What are your plans for the future?
Ross: We have a finished album ready for release called 'Victims Of Our Own Efficiency', which we aim to launch at our next show, which will be on February 24th at the Urban Bar in Whitechapel. We are also very close to finishing album number two, which is to be entitled 'Episodes'.

Ian: Sounds good to me!

Q: Any parting words?
Ross: As an unwise man once sang, the only thing for sure is that nothing is for sure.

Ian: WOW ... that's an incredible thought indeed - whoever said that must be a genius!
*
*
*
Thanks