Tonemirror, "You're Getting Colder" - Track by Track 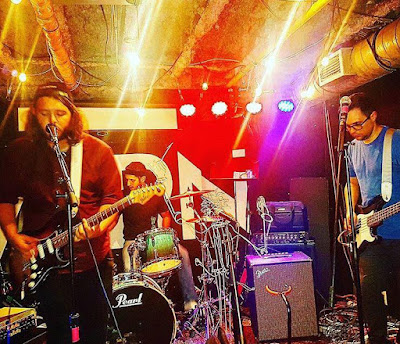 HITCHCOCK
Jake: “The music for ‘Hitchcock’ was initially inspired by old horror movie scores, with the guitars being inspired by Bernard Herrmann's score for ‘Psycho’ and Robby's drums in the chorus coming from the ‘get get get, out out out’ from Harry Manfredini's ‘Friday the 13th’ score. We initially wrote everything around Halloween time, which only added to the tension and creepiness of the music. However the lyrics came after I dug a little deeper into Alfred Hitchcock's history. The man was a tyrannical and abusive monster on set to his crew and female cast members, yet he's still heralded as this amazing artist, which bothered me a lot. I wanted to capture the feeling of fear and uneasiness he created on set, and I think we really nailed it. Although it was written well before, in the wake of all the stuff going on in Hollywood today I think it's only more relevant.

OCTOBER Jake: “‘October’ was the oldest track we recorded, written way back in 2015. I had just graduated university, and kinda felt aimless and was thinking about what it meant not having to go back that fall. In some ways, the song is about accepting the end of childhood and the aimlessness of early adult life. October was always the month that stood out most in my favourite childhood memories so I just rolled with it. We initially wound up shelving it because we could never really work it out live (there's a really early version of us playing it somewhere on YouTube). Once Charlie joined and really filled out the band, I reworked the guitar part a bit and brought it back to the guys, who were thankfully able to help piece it together again.”

CLEARLY
Charlie: “This is a song that I originally wrote when I was singing and playing guitar in Soft Wounds. At the time, everyone felt that the tune was a little too dark-sounding for a Soft Wounds track, so I put it in the vault. When I joined Tonemirror on bass, I thought that maybe they would like the tune, so I dusted it off and showed it to them. They liked it, so we went with it! ”

MY (DEAD) FRIEND Jake: “I wrote this track after a few instances of bumping into people I knew but hadn't seen in years. A lot of them had changed for the worse (in my mind at least), and it was almost like this version of them I knew had died. We all grow up, we all lose touch with our teenage ideals. It's just part of growing up, and that's okay. But that doesn't mean it still isn't a punch in the gut to see your friends change like that. So in a way it's a eulogy for people that are still here, but dead to me in some way or another haha! Like ‘Hitchcock’, Robby and I started writing this one just before Charlie joined the band, so his playing had a huge impact on how it came together as well.”

GIVE
Charlie: “I wanted to write a more upbeat tempo song that could get people moving, or at least bobbing their heads at a show. Lyrically, this song is kind of about our obsession with ‘selfie culture’ and how through things like social media, many people show an edited version of themselves, filtered (literally) through glossy, artistic photos that only show the glamour and cut out all the other aspects of real life.”
*
*
*
Thanks