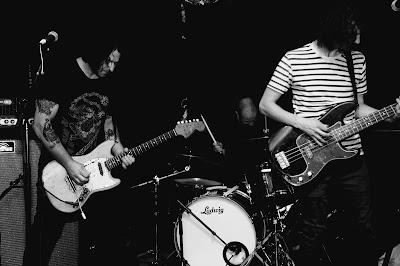 
Between the Lines:
Shane: This track has always felt to me like it was a bit of a showcase track. It's got a little bit of all the styles we have experimented with and then smashed them together into an audio tie dye of sorts. I think it braces the listeners a bit into what they are to expect for the rest of the LP without giving too much away. Though there is a certain level of disjointedness within this track that I don't think is prevalent through the rest of the LP. Not just the fact it jumps from synth and beats to a colourful shoegaze chorus and then to a noisy arrangement of chaos and beating toms, but because during the writing process itself. We had come back to this one a number of times and it was very much a patience game until one day it all clicked into place and changed from chaotic to organised chaos.

Filters:
Shane: Now this track is possibly my favourite, but most likely because of a much more personal attachment. This song was technically our "first" song in a manner of speaking. We have been playing and experimenting for years just for fun, but then out of nowhere we wrote this. I think we both felt like we had hit what it was we were looking for and felt a sense of direction. It was like a lot of what we were doing was leading up to this style. When we first put a demo together I couldn't help but think "I have never heard something quite like this before..." and it became a bit of a benchmark. Even now, since we have introduced Dave as our drummer it was an incredibly satisfying song to crack. I also feel it's one of those tracks that's a real journey. Especially once the 5th layer of guitar kicks in at the end to push it to a gear you assumed it was already in.

Into your arms:
Shane: Ah yeah. Simply put for a long time we just referred to this song as 80s. It has also been described to me as "kind of like tears for fears but without all that stuff". I think that has always been my favourite description of us. In timeline of writing this song came right after filters, so it was suiting to follow suit on the record. It was right after we felt we had started to adopt our new found style and naturally found ourselves writing something a but more catchy and super cheesy (but in the best way of course). We picked it out as the first single right away, even before finishing writing the album.

Dylan : This is my favourite track on the album. I feel the album takes you on a journey and this track is a real pinnacle even though there is still more to come. Most lyrics on the record portray a sense of new love and tough times. This song reflects a real personal turning point.

Come Alive:
Shane: I enjoy this one a lot as a good way to break up the album. I'm sure Dylan will be able to say a lot more about this one than myself but I really enjoyed doing a little homage to our young grunge selves. I expect we’ll be playing around with this style a lot more.

Dylan : This track came out of nowhere. We recorded it the same day it was written and it was exactly what the record needed.. a break haha. All the tracks so far were sounding huge and epic and we needed something to break it up. Initially the idea was to keep it super chill and minimal with just one guitar and vocals. But as we recorded it we wrote a few extra elements and lead guitar lines that we loved which helped it evolve into the song it is on the record. It still gives a nice relaxed vibe straight after “into your arms” which fits perfectly.

Gazer:
Shane: The oldest of the lot. We have been playing this one for quite awhile and out of all the old tracks and demo albums we only kept this one. It's a pretty straight out slow, shoegaze track. Back in our soundcloud days it was always the most popular demo and people had frequently asked when it would be released properly. In our true style it took years, but I'm really glad it's out now.

Emptiness:
Shane: This was our weird phantom song. Similar to Between the Lines it started as an old piece we wrote that we kept trying to come back too time and time again until the song took a mind of its own, with influence of ourselves and computer malfunctions. We legitimately also heard the structure for the first time ourselves after a computer crash, and when we reopened it it was all messed up and how it is now. I don't think we thought we were allowed to change it more after that and said to each other “well that's got to be the end of the album” and of course now it is.

Dylan : As Shane mentioned this song was a bit of a phantom song. We first wrote all the parts one night and it was certainly darker and more experimental than our other songs. We knew it had to be the ending song on the album but weren’t sure how we were going to bring it all together. This song builds from start to finish both musically and lyrically. I always like records to have a big ending. I feel it ties up the album as a whole and leaves you waiting for what’s to come..
*
*
*
Thanks