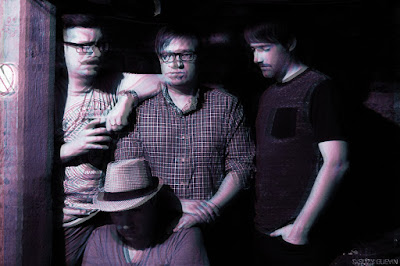 
This is the making of The City Gates’ Forever Orbiter, released on April 27th 2018 via Northern Light Records. We couldn’t ask for a better label than Northern Light Records to release our album, especially since the label is Canadian like ourselves! The label is based out west in British Colombia and releases a ton of great albums, including records by Rev Rev Rev and ACTORS. We also dig Northern Light Records because they showcase a really cool mix of genres we love, such as shoegaze, post-punk and dream pop.

So here we go…

1. Checkpoint Charlie
This was the first « single » we recorded for 'Forever Orbiter' back in 2015. I think that this song defines how we like to create songs and the chemistry between band members. Like 'Sound Better with Reverb' says it, “Checkpoint is an expansive tune, shifting from introverted to anthemic.” It also has that kind of Krautrock influence, since the song was created and came out of a two chords 15 minute jam we did at our rehearsal place. The final version is almost an exact replica of that first version, without the 10 minutes at the end of it. Well, we cut it down a little for the album version.

Oh man! We really had a blast while we recording that song! I won’t talk too much about how Checkpoint Charlie was recorded while we were all “hungover”. To record the song, we went to Gautier Marinof's studio. He's a really good friend of ours and, in my opinion, one of the best Montreal sound engineers around. As we are all gears addicts, we brought everything we thought could be used during the recording session. Then, we put up a wall of guitar amps, including an AC 30, a Jazz Chorus 120, a Fender Tonemaster, a Fender Bandmaster, all while using different mics in different spots in the room (and outside as well). We also used a bunch of different guitars to get altered tones: 1996 Fender Jaguar, Gretsch Tennessee Rose hollowbody, German 1960s electric Framous guitar model. Frank also used his old 1955 Gibson ES-225 and a 1950-1960s Stella acoustic guitar to add some more rhythm guitar layers. Justin also played for the first time on his new Sakae drums set that he just brought back straight from Japan. John also played his P-bass bass into his 1970s Ampeg amp, which sounds like a ton of bricks right in your face.

To get a more “human feel”, Gautier asked us to play the whole song without any metronome and without any cuts. So, that's exactly what we did. The main song was entirely recorded in one take, including the end of the song where you can hear Maxime doing some guitar loops and playing with the knobs on his pedals, while John did the same with his bass pedals. If you want to get the whole sensation of Checkpoint Charlie, well, just turn up the volume!

I also love the lyrics. The story behind them takes place during the Berlin Wall and the Cold War era. It talks about someone who crosses the border between East Berlin and West Berlin. We are big fans of History. You can definitely see this if you listen carefully to the lyrics of in our songs.

2. London
London is actually an “old” song that we wrote in 2012-2013. It refers to the “Battle of England” and the German Blitz bombing offensive during the Second World War. Indeed, in September 1940, the Luftwaffe (German aircrafts during WWII) bombed London for 56 out of 57 days and nights. We wanted to recreate that atmosphere on our tune London. We can almost feel the bombs falling on London at the end of the song, right after the bridge (3:36 to 4:30), while Maxime crashes his Jaguar guitar straight on the floor with his hands and feet.

The song was also recorded at Gautier’s studio. I do like the lead guitar on that one, some of which was recorded on tape. You can definitely hear them if you turn up the volume. Likewise, Frank does a great job on rhythm guitar, with his down-tuned vintage Aria Diamond 1532T Japanese guitar. I also love that dirty bass tone and the reverb on Juice’s Sakae snare drum.

3. Maddening Ride
This is one of my favorites on the album. I am pretty happy how the final mix version turned out. Thanks to our guitarist Frank for that. He did a great job. I like that obscure dark melancholy sound which kind of reminds me a little bit of JAMC and The Sisters of Mercy. The lyrics, which were written by John’s hand, are also pretty deep. Love them! I also like these shimmering Gretsch Tennessee Rose hollowbody guitars melting into reverb and a vintage Aria PS-10 Phase Shifter pedal. I also like the guitar “solo” vibe, which was a total spur of the moment, on the spot I came up with during the very first take!

4. Phantom
I already mentioned earlier in this interview that we are big fans of history so far. Well, this song talks about the famous RAF World War II Avro Lancaster heavy bomber aircraft called “The Phantom of the Rhur” (EE139). Phantom was one of just 35 – out of 7,373 – to survive 100 flights in the war and becoming a Lancaster “Centurion”, as you can read in a nice article on veteran Lancaster WWII pilot’s Ron Clark (https://www.telegraph.co.uk/news/obituaries/military-obituaries/air-force-obituaries/10531898/Ron-Clark-obituary.html). In total, 3,345 out of 7,373 vanished while on operations, with the loss of more than 21,000 crew members. The Phantom participated in many city bombings taken by the Germans, in particular for avenging the London city bombing. Thrilling to have London and Phantom on the same album.

The making of Phantom has also a typical Montreal story. The draft and the first recordings of the song were made while Frank and John were listening a Montreal Canadiens hockey game. John was sitting on a couch with his bass and did a great bass line. Frank said something to John like: “Hey! That's freaking good. Let’s record that shit”. The result was that heavy fuzzy Fender Precision bassline that you can hear in throughout the whole song. Phantom also features sections with unique musical builds that make the song more interesting. It’s a cool song to play live.

5. Echo Radio
This is an old song that we started to record a while ago. It has that kind of 80’s straight-forward post-punk vibe. We are huge fans of that scene, with such bands as The Sisters of Mercy, The Chameleons, Clan of Xymox, Red Lorry Yellow Lorry, etc. While I use baritone vocals, I thought it would be great to add some vocal textures in the bridge/chorus. So, I asked my friend Krissy Vanderwoude from Whimsical if she would be interested to sing some mesmerising vocals on the song. Glad that she said “yes” right away. The result is pretty great. That being said, I has also like that GCB95 Crybaby Wah pedal on the bridge/chorus.

6. Dead Calm
Dead Calm is a minimalist song that comes out directly out of an improvised recording session that I did at home when I was trying a vintage 1960’s Japanese-made Zen-On electric guitar that I had just bought for a penny or so. Few weeks after, I came across this two single track recording when I realized I was listening to them in loop while I was reading Tolstoy’s War and Peace. A mystical atmosphere it was. So, I decided to send the song to our friend sound engineer Chris Cline, (whose previous work includes Explosions in the Sky, And You Will Know Us by the Trail of Dead and The Foreign Resort) to do some editing, keys and to mix the song. The final result comes out in an ethereal dream pop, darkwave sound that reminds me a little bit of The Cocteau Twins, Brian Eno, This Mortal Coil and other early 4AD bands.

Moreover, Dead Calm strikes a pause, and offers a nice segway between Echo Radio and the song that closes the album: Sad Sad Surf.

7. Sad Sad Surf
Sad Sad Surf was the last song that was written for Forever Orbiter. This is a kind of post-punk/jangle pop tune that makes me want to go on a strange road trip. The song title goes well with the mood of the tune: something like a dichotomy between blissful and melancholy.

The recording of Sad Sad Surf was also cool to do. There are a so many guitar layers on this one, that the IMac that we used for the recording almost shut down. I also like that vintage Japanese Teisco electric guitar tone that we used to add more bass tone on the chorus/bridges.
*
*
*
Thanks