Binary Code with Margaret - An Interview 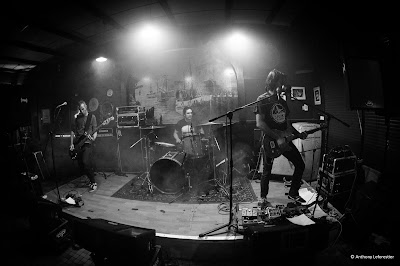 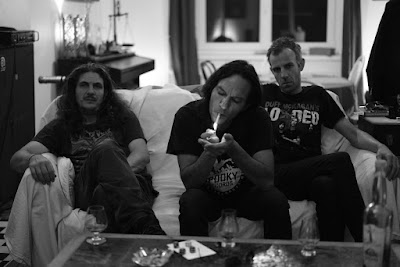 Q. When did Margaret start? Tell us about the history...
Well the story began in 2015 when Olivier (the bass player) and me came back in contact after few year. We played together in several bands years ago and I think we were a bit full on with our music projects at the time. He was in a kind of symphonic metal band and I was in a post-rock stuff. I'm pretty sure that I called him first. My post-rock experience was pretty intense with no results, no gigs no recordings at all. We did some and it was great but it demanded me just too much. So I wanted to make something much more simple the kind of stuff like "let's just plug and play". I thought just a three piece band could be nice and easy and I didn't want to play complicated parts on guitar. In the same mood or you know just because I didn't want to think too much about the guitar I thought maybe I can just sing words here and there. You know I'm not a singer, definitely not, but experimenting vocal sounded fun to me. So I had this idea then I called Olivier! I guess because I knew him quite well, was pretty aware about his skills on bass and mostly about his punk culture. Hopefully He said : "Fuck yeah!!!!" I'm glad he did. We needed to find a drummer to complete the band. Olivier had a good friend beginning drums. Clemence was, she still is, a nice person, kind and a hard worker! We began the project with her. We decided to records the first EP coz we had songs even if she was not ready to play them. I did the drums on the first EP "Everything Gets Closer". We recorded it in my house, in the attic precisely. I had got the gear to do it. I did the mix and we released it on 10 inches vinyl in 2016. I wanted a vinyl edition for the first one that's it! But soon after that Clemence had a great opportunity for dancing and honestly I'm happy she accepted it because she does absolutely awesome stuff now. I should say that having a she-drummer in the band was something was keen on. I didn't care that she was a proper drummer or not it was just great to have girl at the drums. Anyway she left the band and we had to find a drummer again. So, as usual, I called Baptiste. He's a top bloke, the best person ever, a man with a heart big as earth. He helped me in my post-rock band when I needed someone to hit the drums and he did it again. We were Three again so we made gigs here and there not so much but few. We continued to compose songs and we released at the end of 2017 the second EP "Binary Code". Same process, Recorded at home, the attic again, mixed by myself, no vinyl (coz we are broke!) this time it's a burned CD and a home made cover! Now coz you send us an email for an interview I'm answering to your questions! For a fucking Brazilian music blog!!!! hoohoo!!!! Man this is absolutely awesome!!!!!

Q: Who are your influences?
I can answer for me. Guess Olivier will give his own influences.
Well, it's a bit complicated to find what is the influences. It's much more like a digest of decades of sounds ( now you can guess how old I am! ;) ). I can list styles and maybe some bands can pop up in my mind while I reply. Krautrock, experimental music, classic rock, stoner rock, Swamp rock from Australia, progressive rock but not technically boring, American Folk music, Blues, proto punk, post punk, punk rock bands ( pretty fun that I can't say just punk), some psychedelic stuff, early post-rock bands, Thrash metal, power metal some death but not listening often or maybe when I'm fucked up with metal friends or if I wanted to go back to my teen, Indie bands of course. Anyway There are always some common points. A work around the texture of the sound, something a bit rough not always easy to listen to. It could be catchy but certainly "désinvolte" in French, pretty hard to translate. It could mean "doing something with the art of notdoing care about". So Guess you need bands! So with no order : Godspeed You Black Emperor!, Pantera, Tool, Sonic Youth, Faith no more and any project of Mike Patton, Radiohead, Suicide, Bauhaus, Pavement, Tortoise, King Crimsom, Steve Reich, Morphine, Microfilm, The Notwist, Calexico, Kyuss, Fugazi, Queen of The Stone Age, John Cage, Meshuggah, The Drones, Neil Young, Ligeti, Tom Waits, Mark Lanegan, The Kill Devil Hills, Portishead, Girls Vs Boys, Slint, The for Carnation. Some friends : El Madrigal, Ben Salter, Justin Cusack, The Gin Club, Paramount Styles, The Butcher Birds, The Black Diamond Heavies, Häne Brenecki, Alpha Strategy, Horst Du Noch, Ronan One man Band, We escape.... And so many more that I'm sad to forget!

Q. Make a list of 5 albuns of all time…
No Order again :
Morphine " Good"
Tool "Lateralus"
Godspeed you Black Emperor "F#A#"
Steve Reich "Music for 18 musicians"
Ravel "Le Gibet"
Nick Drake "Pink Moon"
But honestly I don't like top 5 stuff... Because tomorrow or in 5 minutes it's gonna be different!

Q. How do you feel playing live?
Free

Q. How do you describe Margaret´s sounds?
Hard question. But I'll try to make it quick coz I was pretty long before. Textured, a bit fuzzy. We try to be rough but we are not enough yet I think.


Q: Tell us about the process of recording the songs ?
Mostly I composed but for few songs I took some riff from Olivier and make a song with it. On the first EP we did something I loved. Olivier had just a part of a song. I took the chords made something with it. He writes a bit too so I asked to him for a text. He can write long stuff. He gave me 2 or 3 pages he wrote roughly and I picked up sentences or a word here and there. We did the lyrics with that! I think it's "Everything Gets Closer" on the first EP. We should do it again!

Q. Which new bands do you recommend?
Now I listen quite often to Iddles, a band from England. I saw them in festival last year! A great show, "punkly" intense. So a really really good English punk rock band. The album is a bit too much well produced for my taste but the sounds are great! But Let's be serious! Just move your ass go to the gig, find your sound, support the local scene! This is the only thing I can recommend!

Q: Which band would you love to made a cover version of?
We did covers of The Butcher Birds and of Girls vs Boys. I thing that the next one will be Bauhaus

Q: What are your plans for the future?
Find a new drummer. Again! Yeah I know it's always a bit the same story! Baptiste left us 2 weeks ago for personal reason. No argue no trouble! It's just Life! So we've got a touch a friend I know! So we'll be ready soon

A LP that's for sure next year! On vinyl again!!!! Can't wait! Gigs! We are pretty bad to find gigs don't desperate to set up a network or find someone to help us. We all work so we don't have so much spare time to apply for a show!

Q: Any parting words?
Because we are such dickheads to book gigs maybe we can play in Brazil!!!!! But definitely thank you so much Renato to come to us for this interview. We are glad and very honoured about your attention!
Thanks! Thanks! Thanks!
*
*
*
Thanks