Pizza Jam with Swoon - An Interview 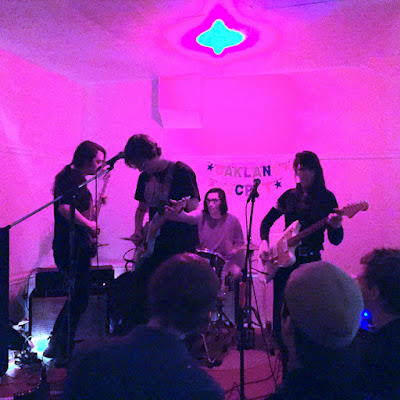 Q. When did Swoon begin? Tell us about the history...
In seclusion while I lived in Wyoming years and years ago I used to watch 120 minutes a lot. I was particularly stoned when the video for My bloody Valentine's "Soon" played and I thought "what the fuck is this????". Afterwards I just had to write a shoegaze song, for the fun of it. So I wrote and recorded the demo for "Grave". I put that away and continued with my raunchy punk bands. I still wrote shoegaze songs for fun on the side though.

Fast forward thirteen years, I met Chani. I had really been itching to record a shoegaze album and after seeing her play I knew that she would be a perfect collaborator. We started writing melodies just the two of us and that lasted almost a year. We became really close friends and I think the way our guitars and voices gel is evidence of it.

So then it was time to get a rythym section and I couldn't think of a better bassist than Cameron. We went through a few musicians (shout out SteveO, Jenny, David, Sean and Ian!) even me having to play the drums in one incarnation. Luckily I propositioned Syam and offered him some kisses if he would play drums. He agreed and the band became what I always dreamed it to be. Thats the long and short of it.

Q: Who are your influences?
To be honest, drugs and alcohol. Haha!


My friends mostly in all seriousness. The Bay Area hosts the best community of underground and progressive artists I've ever known. That mbv vid too I guess.

Q. Make a list of 5 albuns of all time…
Prison Library "Uma Thurman at the beach"
The Young Men! "Fuck You"
Nod and the Hobgoblins "S/T"
Daisy World "S/T"
Yogurt Brain "Vol. 3"

Q. How do you feel playing live?
In love

Q. How do you describe Swoon´s sounds?
It's a very cut and dry shoe gaze record. I really just wanted to honor the genre.

Q: Tell us about the process of recording the songs ?
Ned Meiners recorded us and killed it. We specifically left human elements like sniffs and fret sounds and tremolo bars being dropped in to remind everyone that a group of punks just gathered in a room and knocked this thing out. I have a problem with how pious a lot of shoegaze and dream pop bands can be. To be honest I don't really like much of the genre haha, I'm a punk at heart.

Pizza jam specifically ends the record to remind everyone that we don't take ourselves too seriously.

No band photo of all the members frowning here.

Q. Which new bands do you recommend?
Tie: Blues Lawyer, BAUS, preening, and Neutrals, Nopes, Sierra Victima... this is a very loaded question...

Q: Which band would you love to made a cover version of?
Been there, done that! Its a halloween tradition here in Oakland for all the musicians to cover bands and get together and play every halloween.

I wanna do Wipers a lot.

Q: What are your plans for the future?
Not too sure, I kinda want to get back to playing fucked up sounding angular guitar punk, I think Chani does too. Im not feeling so hopeful and "swoony" with the state of everything. A lot has happened between writing and recording these songs. I don't think my heart has healed enough to write pretty melodies yet. We're definitely gonna play some tape release shows.

Q: Any parting words?
The music isn't as important as the friendships you gain from it.