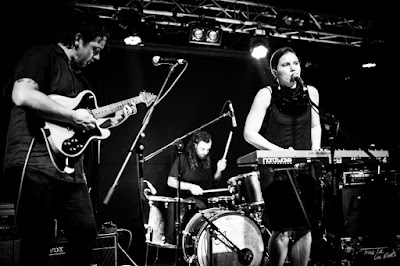 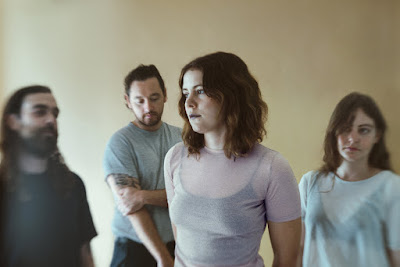 Q. When did Mere Women begin? Tell us about the history...
Amy, Flyn and former drummer, Kat started the band back in 2011 in Marrickville NSW Australia. We mainly played warehouses and record stores finding our feet until we released our first record "Old life" in 2012. In 2015 we released "Your town" on Poison city records, a record themed in nostalgia and heartache which we recorded in a cold storage warehouse used to store wine located out in country NSW. Over the years we've toured extensively around Australia and New Zealand with a few spontaneous shows in New York in 2016. Later in 2016 we added Trischelle on bass, formerly of another Sydney band called No art. For our latest album "Big Skies" we found ourselves living in different parts of Australia. Amy moved to country Australia for 6 months while the rest of us were city bound. This move became integral to themes imbedded throughout the album which we released in 2017 also on Poison city records. After we toured "Big skies" Kat decided she couldn't play live anymore and we replaced her with new drummer, Mac.

Q: Who are your influences?
Our influences are really varied, each of us come from different backgrounds and hold influences in punk,hardcore to electronic. To name a few I'd say The Smiths,Kate Bush,David Bowie,Bjork,Yeah Yeah Yeahs, The Walkmen, Liars, The Drones,Propagandhi, Blood Brothers, The Go-betweens

Q. Make a list of 5 albums of all time…
Radiohead-Kid A
At the Drive in-Relationship of command
The Smiths-Hatful of Hollow
David Bowie-Ziggy stardust
Yeah Yeah Yeahs-Fever to tell

Q. How do you feel playing live?
We love playing live. Although we are really proud of our records there aren't many feelings like when the audience is right in your face singing along and clapping at something you played a part in creating

Q. How do you describe Mere Women´s sounds?
We cover many genres and just play what we play, we don't ever go into a song thinking we need a punk song or a pop song, every memeber brings something different to make a mash up of Gothic infused post punk rooted in pop.

Q: Tell us about the process of recording the songs ?
Tim G Carr has recorded mostly all of our songs. Every record is different, location wise but we attack it in the same way. We record everything live except vocals and maybe some guitar overdubs we try to capture the energy created when a band is all playing together. I don't believe a record have the same feel when recorded seperately when you aren't looking at or feeling the other members in the band

Q: Which band would you love to made a cover version of?
I think we'd really suit covering Pat Benatar-Love is a battlefield ahaha!

Q: What are your plans for the future?
We are about to bunker down to write the next record. We've got a few songs already on the boil and we are looking forward to writing the rest. The next releases will follow much more international touring and we look forward to that.

Q: Any parting words?
The Music industry is a tough ride for everybody but more so minorities. Treat everyone with the same respect and always remember to be inclusive in lineups and try to be diverse in your music selection.
*
*
*
Thanks