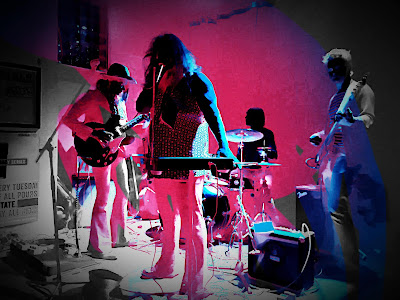 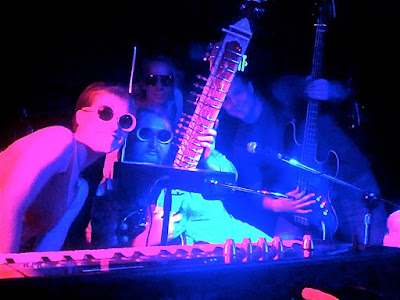 Q. When did Transcendental Strangers? start? Tell us about the history...
Dr: This is a bit convoluted. TS? really evolved out of a different group that Mark and I had, which dissolved suddenly upon the 3rd member moving to Hawaii without notice. We happened to have just booked a last minute gig filling in for a group that cancelled. We got a last minute bass player, had a couple hour jam session where we wrote all new songs, and headed to the show. We got there, and the venue had a kitchy chalkboard marquee outside. The doorman asked what our band name was. Not entirely sure what to say, I paused then replied, "Transcendental... Stranger?"
He retorted, "With a comma and a question mark?"
"Yeah."
So, we became Transcendental, Stranger?. However, for the next show we booked, the poster artist pluralized Stranger. We decided that had a better ring to it, so we dropped the comma and added the 's'. We kept the question mark for aesthetic value, which we won't ever get rid of. A lot of promoters hate it. They're of the opinion that people won't really know if we're playing or not, or some BS like that...

Anyway, we shifted through a couple members (added keys, lost our bassist, and then lost the keys) before adding Cody on guitar, which really solidified the group. He and I were in the process of starting a group with JP (who would become our 2nd bassist). Instead, they joined us. Technically this occurred before our keys player had an existential crisis and vanished for several months... That was almost 5 years ago? Wow, it doesn't seem like it has been that long... I know that Lou Reed had just died before the first jam session we had with Cody and JP. We wrote Tommy that day as sort of a tribute to him...

Mark: Early on, my drumming was very influenced by Danny Carey. Now, it's more influenced by my jam mate's, both in TS? and elsewhere.

Mark: Radiohead - Kid A, Sufjan Stevens - Age of Adz, Cant - Dreams Come True, of Montreal - Hissing Fauna, Are You the Destroyer, Why? - Alopecia

Q. How do you feel playing live?
Cody: The void.

Dr: On a good night, there's definitely a feeling of ascention, where the music takes hold and lifts you. You sort of "enter the void..." The best live shows I have been to have had the ability to just take you somewhere; we do our best to do the same. Ultimately though, playing live is very therapeutic for me.

Mark: I feel like I'm drifting in a sea of unlimited creativity...


Q. How do you describe Transcendental Strangers?´ sounds?
Dr: We've sort of settled on "freak rock" because it's vague yet encompasses the umbrella of sounds we have. Most of our songs are pretty different from one another, which makes it difficult to pigeonhole.

Dr: Yeah, that is another good one. I love the way other people describe us. I was once compared to Charles Manson after a set, which was actually quite flattering. My favorite review was, "I don't usually like electronic music, but you guys do it right.", because apparently playing electric instruments is the only qualifying factor in making "electronic music."

Q: Tell us about the process of recording the songs ?
Dr: We recorded the album at Blue Bell Knoll studio. Neil Weir is an absolute wizard of sound. He made the recording go so smoothly, and his insights were invaluable. Bringing in our friend Marie from Driftwood Pyre to add some organ and flute was great too! The whole process was very fluid and natural.

Dr: Hibushibire, Nest Egg, MIEN... I'm still endlessly obsessed with Gnod's album from last year. (Although, the brand new one's great too...) While it isn't new, I recently discovered the Flower Travelin' Band. Their album Satori has been in heavy rotation for me. Also, lots of White Zombie lately since picking up It Came From New York.

Q: Which band would you love to made a cover version of?
Cody: I only have nightmares of covers...

Dr: We've had a few disasters. "Magic Carpet Ride" was a bad idea... I still really want to cover "Monster" though. It's just as relevant as when it came out, if not more...

Mark: Radiohead's "Wolf at the Door"

Dr: Also, it's not a cover, but we've been talking about staging a live score to the Invasion of Thunderbolt Pagoda... Oh, and we used to do a sprawling 20 minute cover of Beck's "Loser"; that was generally pretty fun...

Q: What are your plans for the future?
Dr: We'll be recording our 2nd album very soon, which we hope to have out by the end of the summer.

Cody: I want us to record an album on top of a mountain...

Q: Any parting words?
"Parting is all we know of heaven, and all we need of hell." ~ Emily Dickinson
*
*
*
Thanks