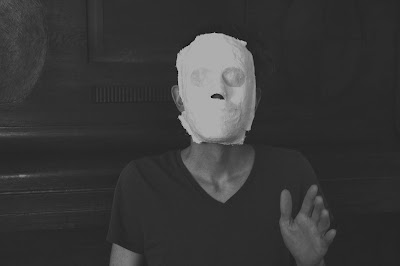 “X” is the 10th part of Vlimmer’s 18-EP series. Here’s what’s behind it:
1. Nachwehen: Like an exhausting summer night’s blackout – this song sounds like being found on the floor of some friend’s summer cottage with a decreasing heart rate. The only thing preventing your heart from stopping is the clacking sound of bones that resuscitate the body. The basic instrumental parts developed while jamming for the soundtrack of the disturbing German audiobook “Randow”. The bass is pretty deep, the voice quite fucked up and emotional. - Apart from my collaboration with Japanese artist Oceaneer (“Meerheit” EP) this is the first time you can really hear a piano on a Vlimmer recording. Lyric-wise “Nachwehen” actually belongs to “IIIIIIIII” (part 9), it’s about experiencing some kind of trivial life without spending any thoughts on things that once meant something - it’s giving up, temporarily; which is even easier because in dizzying heights your brain fails and makes you do things you wouldn’t normally do. Although I put a focus on the lyrical coherence of each release I figured it would fit much better as the first song of the 10th part, “X”.

2. Nebelgeist: Why not going for a four-to-the-floor song? For months this song had a rather stop-and-go-like drum pattern. I don’t know why I refused to go for a simple beat here for so long, but when I changed it the whole track suddenly was in full bloom, up-beat, catchy; with its sparkling synths it works in the club, too, I guess. There are a couple of first-timers here: I haven’t used an acoustic guitar before, also, it’s the first time I did something like rapping. I never plan this in advance, it just keeps happening, and as long as surprising stuff like this keeps coming Vlimmer stays fresh and challenging for me.

3. Kondens: The fastest Vlimmer track out there? At least if you only count the songs from the 18-EP series “Kondens” might be the one. Originally it started as a 13-minute krautrock song which was less angsty, less noisy than what it sounds like now, I wasn’t even sure whether to put it on “X”. Usually I don’t spend too much time with the arrangement of a Vlimmer song, but every now and then there’s a song which needs more attention. I had tried lots of stuff here; in the end, “Kondens” worked when I added the choir intro, more distorted guitar layers, a synth arpeggio in the chorus, that moment where everything slows down before the second chorus and the massive wall of fuzz and noise in the instrumental part. It almost makes your ears bleed, and yes, I did this on purpose, I wanted the listeners to feel the music and make the closing three minutes even more calming before the crashing cymbals set in one last time to gently push you into space. Hey, crashing cymbals? That’s another premiere.

4. Stufenlethargie: This song is a perfect example for choosing a song that fits into a tracklist rather than seeing it as a song you listen to separately. I had songs which I liked more, like “Satzfetzen” which turned out becoming a fan favourite when it comes to non-EP tracks (it can be found on Cold Transmission’s compilation “Zeitgeist Vol. 2”), and it wasn’t easy to discard it for another song. Yet, “Stufenlethargie” perfectly fits to the flow of “X”, it’s what this release needs after the intense “Kondens”, something more minimal was crucial here. Still, on “Stufenlethargie” I needed to add a second drum pattern to give it a more stomping feel. It’s the guitars in the chorus, though, which turned this song into something special for me. The washed-out sound of single strike chords create depth and lethargy. Personally, it’s the EPs biggest grower.

5. Thrombo: It may not sound to you like it, but the arrangement here is one of Vlimmer’s most minimal to date. It’s basically the synth sound which I created with the Superego Plus from Electro Harmonix that makes this song sound so massive – and there are really only two synth tracks here. It was written and recorded pretty quickly. The vocals are me trying to deliver airy vocals on the verge of opera. In combination with the lyrics it’s one of the most devastating songs I’ve written, it’s dealing with the paranoia and schizophrenia of the protagonist of my EP series, he’s losing his mind increasingly until the danger of complete dissolution.
*
*
*
Thanks