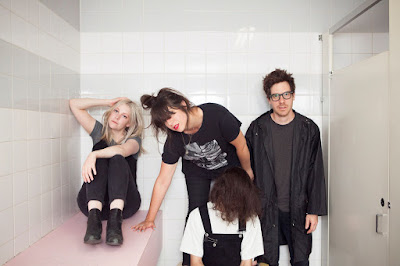 
Q. When did Silver Dapple start? Tell us about the history...
Silver Dapple started in around 2009, but has changed a lot since then. Emily began recording “shoegazy” covers of songs she liked and eventually started composing originals. Over the years the lineup has changed. The most significant change was in 2016 when Melissa joined the band and Emily and Melissa started composing songs together. These are the songs that became the new album, Moody Boots, and the new dynamic has inspired a lot of new material.

Q: Who are your influences?
We are influenced by a lot of different things. We all have our different tastes, but I think the overlap is in a sound that is kind of dark and catchy at the same time. Personal experiences definitely shape the music that we make, as well.

Q. Make a list of 5 albuns of all time…
This is a hard one, because, like stated before, we all have our different top 5. In no order, and mixed from everyone:

Q. How do you describe Silver Dapple´s sounds?
Our sound is melancholy and pop… I think it’s better to just listen to it J

Q: Tell us about the process of recording the songs ?
The songs were recorded in a short period of time, but spread out over a couple of months due to personal schedules. We recorded with Jean-Michel Coutu, which is always a lot of fun. We tried to keep the songs as close to the live versions as possible, so there wasn’t a lot of overdubbing or adding extra sounds and vocals. We worked hard to get the truest sound and feeling of each song. For certain compositions that were not 100% completed before we started recording, we took the opportunity given by the process of recording to explore different structures and moods.

Q. Which new bands do you recommend?
New bands we have been enjoying lately are Fountain, Freak Heat Waves, and Boy Harsher.

Q: Which band would you love to made a cover version of?
We have actually done a few covers! The project started with Emily who did covers of Gun Club, Del Shannon, and Elastica. If we were to cover something now it would be fun to cover Q Lazzarus – Goodbye Horses.

Q: What are your plans for the future?
We just put out a record, Moody Boots, so we are looking forward to playing some live shows. But, we are always writing new songs, so hopefully we can put out an EP in the very near future.
*
*
*
Thanks