Nothing Quite As Heavy with Shun - An Interview 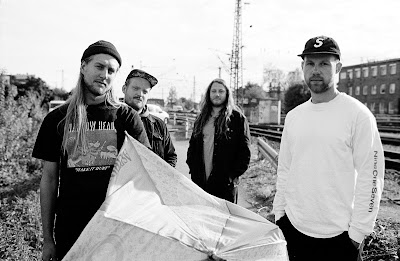 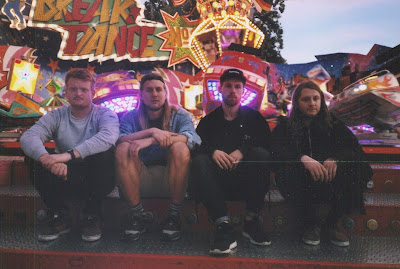 Q. When did Shun start? Tell us about the history...
I think we started getting together sometime in 2014. We were just a couple of friends coming from different musical backgrounds who wanted to make music again. Initially we wanted to start out as a hardcore/punk band since that was the smallest common denominator I guess, haha. So we started playing in Jan’s old basement (which we lost later on due to a pipe burst; it was a miracle that our equipment survived mostly undamaged). With each time we played together we strayed a bit further from that original idea and now we’ve ended up where we are now. It really took us some time to find our sound though, and it wasn’t until 2016 that we started to really pursue the idea of forming a real band that plays shows and all…

Q: Who are your influences?
Most of us have their musical taste all over the place. For the band though, the most essential influences come from dream pop, grunge, and noisier shoegaze, all from both traditional and newer bands. Like I said above, initially our sound was more punk/hc influenced before we added some grunge and finally a lot of dreamy stuff to our style. Our favorite bands include Beach House, Title Fight, Wild Nothing but obviously also more “classic” bands such as Slowdive have influenced our sound.

Q. Make a list of 5 albums of all time…
Jan (drums): This Will Destroy You – s/t
Maxim (guitars): The Vaders – A Link to the Past
Mitch (guitars): Rancid – And Out Come the Wolves
Martin (bass, vocals): The Smiths – The Queen Is Dead

And one that all of us adore a whole lot: Turnover – Peripheral Vision

Q. How do you feel playing live?
To be honest, after about 20 shows now we still feel a little overwhelmed and anxious about each time we go on stage. I think it’s mainly because of the expectations we have about our own performance, we want to do our best. Funnily enough, depending on the place where we play we sometimes don’t expect anything great at all – which makes all of feel a lot more comfortable about everything that happens on stage. Those have turned out to become the better shows in the process, haha! But no matter where we go we always love to play new cities, we have been to many places in Germany and the Netherlands already and in June we will play in Vienna, Austria for the first time. It’s definitely an important aspect about the whole band thing – playing live and hanging out together and with other bands.

Q. How do you describe Shun´s sounds?
We like to describe our music as a mixture of the grittiness and bleak atmosphere of Nothing and the catchy, melodic focus of Turnover. Both of those bands have also been great influences on us, obviously. I guess overall we’re still not entirely sure how “dirty” we want our music to sound. It’s
never gonna be lo-fi or anything like that, but after this first EP sounding rather modern and “clear” we will see how the new songs we are writing right now will develop and which sound fits them best.


Q: Tell us about the process of recording the songs?
“Nothing Quite As Heavy” was recorded in September and October last year. We spent 4 days at Tiny Pond Studio in Hanover, which is a 2 ½ hour drive from Münster where we live. We rented an apartment for the time, and it made the whole experience really unique since we really spent the entire time together: when we were done in the studio for the day, we went on to cook dinner together and so on. Unfortunately, I (Martin) was really sick for most of the time, so I drank literally nothing else but ginger tea for 5 days straight. I recovered a little just before we began recording the vocals, but still had to take a shot of nose drops before each new take, haha. For “Over Me” our friend Vicky from Münster took the time to come to Hanover as well to put in some additional vocals. We had only tried it in our rehearsal space a few times and had no idea what it would sound like in a proper recording setup, but the result made us all really happy. After the initial 4 days, Mitch and I went to Hanover one more time in October to record additional noises and background sounds. Our car broke down before heading back which made everything a lot more complicated (since we had all the gear with us), but that’s another story.

Q. Which new bands do you recommend?
Out of all the bands in Germany right now, our friends in Swirlpool are definitely the most ambitious. Their debut EP comes out May 25th and we’re happy to play a few shows with them, because we believe that’s some of the best shoegaze/alternative stuff to come out of this country for a long, long time. Seriously, check them out. Also, the first LP by New Native from Austria has been released earlier this year

Q: Which band would you love to make a cover version of?
Right now we are working on a cover version of Drake’s “Hold On, We’re Going Home”. Like I said, our tastes are really varied and all of us (excluding Maxim, haha) are big fans of Drizzy! Many of his songs also have this kind of somber atmosphere to them, so we wanted to explore how that translates to our sound. We’ll let you know when we have an audible result.

Q: What are your plans for the future?
The rest of this year will be dedicated to playing shows and writing new songs for a follow-up release. There are a lot of ideas already and we aim to push our own abilities a bit further. In the long run, the next big goal is to craft a release that will make it to vinyl somehow. It would be great to have our own music on our favorite physical format one day.

Q: Any parting words?
We’re glad that so many people from outside of Germany show their interest! In Europe it sometimes feels like all bands/artists are somewhat prone to anything that comes from the US. And even though we also love a lot of that stuff we hope to make a contribution to our own scene and show that there’s something worth listening to from our continent.
*
*
*
Thanks