Refugio with Altas Nubes - An Interview 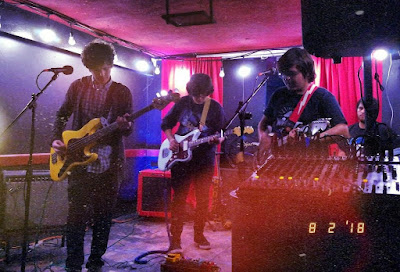 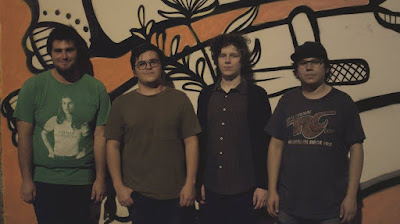 Q. When did Altas Nubes start? Tell us about the history...
The idea of having a band started when i met the drummer benjamin, we met online and we wanted to startup a band with the indie rock sounds we both loved from 80-90s band such as pavement, sonic youth and yo la tengo. We jammed two times and then decided to get a new band member. First we practiced with my cousin on bass, which worked at the beginning playing covers of Nirvana and Pixies songs but we had problems trying to write original songs. The band was called Sonido Perfecto back then, but it broke up. On May 2017, I asked a local musican named Sebastian (Todos Mis Amigos Ya Están Muertos) to jam in my house with Benjamín and thats where it all started, later joining us as a guitarrist Erick came along. We commited on writing original material and started rehearsing weekly at my house.

Q: Who are your influences?
One of my biggest infuence on creating music are artists who started recording their own songs and uploaded them on bandcamp or other streaming services and built their fandom by exposing their art and being good songwriters. I like the DIY ethic and I think one can be a functional musician without the needs of money or external help. Some examples are: Car seat headrest and (Sandy) Alex G.

Q. How do you feel playing live?
It's outstanding, i'd say it's one of the most cathartic, and enjoyable things you can do as a human being, i highly recomend it. Also its the band's most important duty besided writing new material.


Q. How do you describe Altas Nubes´ sounds?
Our sound is kind of a mixture between indie rock sounds, i'd say; Including early indie and new sounds from the actual argentinan indie scene. Plus elements of dreampopy, slacker and shoegaze guitars, and let's say emo style singing in some of the songs.

Q: Tell us about the process of recording the songs ?
The recording process starts with the drums. It's definitely the hardest of all instruments, we used 2 mics, one dinamic mic for the bass drum and a condenser mic for everything else. Once we have the drum tracks we record bass and guitars, in that order we finalize with the vocals and the mastering process.

Q. Which new bands do you recommend?
Snail mail is one of my favorite newest band I've heard recently also I'd like to mention newest record of Las Ligas Menores, an argentinan band that we like a lot.
We also like to recommend some bands from our country: Monte isn't a new band but it's one of our favorite and one big inspiration for the band, queridos edificios, kibbo kift, dylan thomas and triddi.

Q: What are your plans for the future?
We're planning on recording another ep this year, this one will include a concept recurring on most of the songs, I wouldn't say it's a concept ep but it will be more consistent on it's themes and sounds than the ST.

Q: Any parting words?
Thank you so much Renato for this chance of talking, we're very happy you liked our sound and hope to keep you guys updated on our next move.
*
*
*
Thanks