Rape In The Spiritual World with The Olive Shoots - An Interview 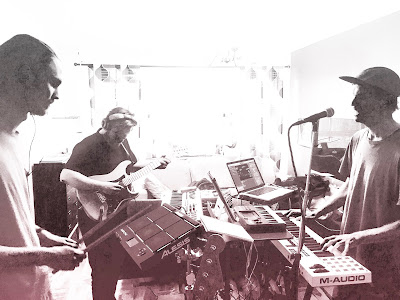 Q. When did The Olive Shoots start? Tell us about the history...
TOS started out as a songwriting project in 2003 and has since then become something like a pseudonym for me [Joachim Sällström]. In one way or the other I have collaborated with different musicians throughout the years, but I’ve been the sole composer all the time. I’ve released some three and four track recs on a few indie labels, but it’s only now that I’m going in for the whole artist thing to the fullest. Whatever that is.

Q: Who are your influences?
It’s changed some over the years. It’s gone from being very eighties indie guitar inspired, into more analogue synth stuff. The inspiration has always been mostly eighties though and I suck at finding new good music. I don’t doubt that a lot that’s going on is interesting, I just don’t care very much. Except for some American Folk and J-Pop music. When it comes to guitar based music it’s all dream pop and Cocteau Twins, and more of the analogue stuff is very Numan centric.

Q. Make a list of the best 5 albums of all time…
I could easily just list five Cocteau albums, but I’d say:
The Smiths’ Hatful of Hollow,
The Cocteaus’ Head Over Heels, the Aikea-Guinea EP and Blue Bell Knoll.

The rest of it goes to Gary Numans’ Pleasure Principle and Telekon. Well, that was just three CT albums!

Q. How do you feel playing live?
I haven’t really done live that much. I’m a studio troll and have been living in the studio for a long time now. Still, I’m starting to reappreciate it a lot since me and my band are doing it more. Nothing can compare to it, really. And with all the modern tech solutions going on such as MainStage, it’s really easy to go from studio to live in an instant.

Q. How do you describe The Olive Shoots´ sounds?
Well, it’s a mix of those albums I listed. To my ears anyway. It’s for others to judge I think. Our last single [Rape (In The Spiritual World)] sounds a lot like some late seventies / early eighties New Wave such as what Talking Heads and Bowie were doing at the time.


Q: Tell us about the process of recording the songs ?
Rape (In the Spiritual World) has been in the process for lots of years. It tackles a subject that I’ve been dealing with in one way or another for ten years now, but it was only some five years ago that I came to a point where I could put it into words in a sensible way. It’s an important theme, hence the confrontational title, but I seldom find it exposed elsewhere in music.

Q. Which new bands do you recommend?
As I seldom listen to new bands I don’t really know. I remember listening a lot to Fleet Foxes like eight years ago but I’m not sure that counts as new. I find most new songs when I watch tv shows, but I never remember their names.

Q: Which band would you love to make a cover version of?
At the moment I’m not really interested in covers. There was a time when I loved people’s interpretations of their favourite artists, and some are very good. But if I’d have to pick one it would have to be a Numan or Cocteau Twins cover, but I wouldn’t make them justice.

Q: What are your plans for the future?
Playing live dates and recording. Eventually make a record called People Who Are Insects with the same theme as the single.