The Skating Party, "Been Caught Feeling' - Track by Track 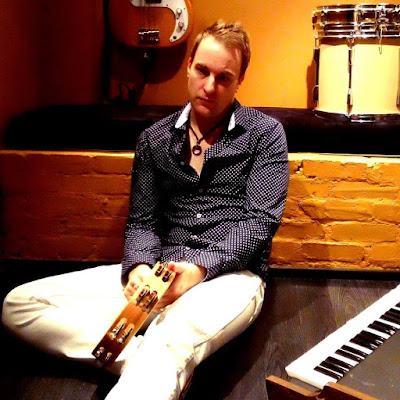 
Strangled by Stars...is the opening track of “Been Caught Feeling,” and probably my most shoegaze-esque track to date. When I started the Skating Party, it was very much a “bedroom recording project,” which leaned heavily on the use of vintage drum machines and synths. I wanted to open this album with a track that was punchy, and that had a big live band feel, even though it was still one person. I loved tracking this song, and really was really pleased with the drum sound and the noisy guitars for the outro section. I tried to create a push/pull effect with some rawness in the verse and hopeful lyrics in the chorus. A synthy organ makes a subtle appearance in the 2nd verse, because some habits you cannot break, haha. The album version has a very low, almost inaudible intro, so my
apologies if you crank this track to hear it and your ear drums get beat up when the song kicks in.

Diamonds…This song started out with a chorus melody, and I remember only having the syllables without the lyrics. I was trying to figure out the words that fit, and then the song sort of morphed into a tale of a young girl with much attention from her male peers. The girl in the story is seems perfect because she is so much like guys that adore her, but it’s also her downfall. I tried to make the verses have a psychedelic feel, with twangy delayed guitars and an unorthodox drumbeat before it gets into
the cleaner pre-chorus, chorus, etc. The track was never released as a single and I shot a homemade video to be released as the lead single from the album.

Tomorrow’s Charade…is a story of boy meets girl then boy gets a little hung up knowing that it’s never going to work out between them. Point being, sometimes you just know the outcome, but you go along for the ride regardless. I layered various synth sounds blended with sweeping xylophone
notes to set the mood of the song on each intro and chorus melody . The song is very jangly and I like the single note melodies in the chorus. I programmed drums for this track, which is the only song w/out “live drums’ (besides the bonus track) on the record, but I think it still fits in with the rest of the album. The tambourine, however, is real…very real, haha.

Twin Polar…is one of the 1st songs I recorded for the album and the 1st  track I recorded with “live drums,” in my current home studio. I also close miked the drums which somehow gave the song areal analog warmth to it in my humble opinion. As I was writing it, it really felt like something you would hear in a winter storm with its sluggish verse and chorus. With that said, the lyrics followed a tormented soul trudging through a storm only to realize it doesn’t get much better when he returns
home. I really liked how the outro guitar solo turned out, and extra credit goes to anyone who can figure out the inaudible background scream at the very end.

Remember the Chain…I was working on this track a year ago, when TBTCI approached me about a Dreampop Comp which I then gladly finished and submitted the track. The only changes I made to the song since the original mix, were some EQ and level changes to the Mix and Master. The song is about a past relationship when each person realizes how much better that may have been, have they met later in life. It was tricky trying to mix the multiple vocal melodies in the outro, but it’s the best I could do, and I am happy with the results…for now.

Draped in Gloom… I wrote this track about a very unique crush that was doomed from beginning. There’s something inspiring about “what if,” situations. The chorus came first when I was writing the song, and I decided, it would be nice to have a song begin with the chorus for a change, instead of the
usual Verse/Chorus/Verse/Chorus The delayed trills in the beginning added a cool effect and mood to the song, and really sums of the subtle use of keys on this album instead of being so upfront like past albums. I made a video of women in distress from classic slasher films which I thought fit the song’s lyrics in a strange way. I channeled Robert Smith a bit on the vocals, so hopefully he doesn’t mind.

Soft Impressions…I wanted to close the album with a slower acoustic track, and I ended up using drums anyway and making this song much more elaborate than I intended. This song has one of my favorite lyrics from the album which is “loves’ a hospice, I’m her servant, with commitment, she’s
allergic.” This line led me to title, “Been Caught Feeling,” as it sums up the theme of the album as a whole, which is, life is short, so make the most of the relationships you find along the way, even if they are very small. I tried to create a dreamy effect with the e-bow guitar on this song, which is another favorite tool of mine.

Glass Curtains…This song was written, right after my last album, “Drowning the Electric Boy,” and as you may be able to tell, it would probably fit more on that record as it is more “electronic,” in its overall production. With that being said, I decided to include it as a bonus track on the CD and Cassette versions. The song is about the thin line between love and obsession. Out of all of the tracks, I think the vocals on this track came out in the top tier, for sure. Also, yes, there was a shout out to Philadlephia’s “Memory Tapes,” aka “Hail Social” in the 2nd Verse.
*
*
*
Thanks