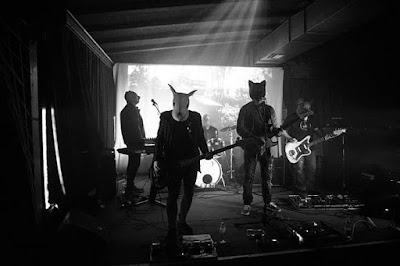 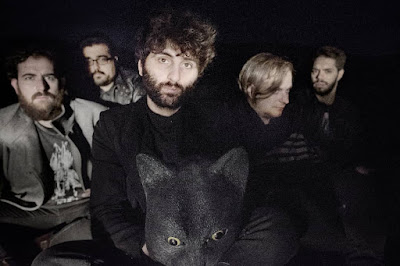 Q. When did Japan Suicide begin? Tell us about the history...
We began to play as Japan Suicide around 2010. Matteo (bass) and Leonardo (synth) had a Smashing Pumpkins' cover band. Then we started to make our own music and after some years we have released "We die in such a place" (2015).

Q: Who are your influences?
Our early influence was the Post-punk period (1978-1984), bands like Joy Division, The Cure, Siuxsie and the Banshees and Bauhaus. When we met togheter was also the "revival" period, with Interpol (Turn on the bright lights!), Editors and Yeah Yeah Yeahs. Then we tried to expand our sound with different nuances or genres, if we have to label this process, melting the Post-punk with Psychedelia and Shoegaze. About our new album "Santa Sangre" there's a line that links the early albums of Siouxsie and the Banshees to The Velvet Underground, passing through Black Angels, Föllakzoid, Portishead.

Q. How do you feel playing live?
We feel every kind of feelings, from the best to the worst. It also depends by the situation, by the people. Sometimes you play just for yourself and sometimes you need to see people happy to stay in front of you, moving, dancing; once in Berlin there were two girls kissing, and it was even touching.


Q. How do you describe Japan Suicide´s sounds?
It's difficult to describe it, also because it depends by our perception of it, that could be different from what the others find in our music. We could say that in general is gloomy, sometimes more cold and ethereal, sad; sometimes tense and noise, powerful with a nervous ryhthm. We like instrumental parts full of intensity and colours, but we also like lightness and a good melody.

Q: Tell us about the process of recording the songs ?
The first step is an initial idea (aesthetical and musical) of the album by Matteo. Then we add the voice and another line in order to have a track to play with the band at the rehearsal room. When almost everything is ready we move to the studio.

Q. Which new bands do you recommend?
The Rolling Stones... There's too much music. We are getting older so maybe we don't even notice new bands or a "new wave". Think about "channel ORANGE" by Frank Ocean. Iosonouncane (an italian artist) with "Die" has made one of the best album of last years in Italy. "Disarray" of the Preoccupations is wonderful. Savages are great. Box and the Twins. Sonic Jesus. The Foreign Resort. Warias.

Q: Which band would you love to made a cover version of?
Sometimes we think about to make a cover, but we don't have a particular band in mind.

Q: What are your plans for the future?
After our return from Los Angeles, Mexico City and WGT in Leipzig we want to record a new album in Summer.

Q: Any parting words?
Thank you very much for the questions and the interest in our music
*
*
*
Thanks