Away with Sister Disaster - An Interview 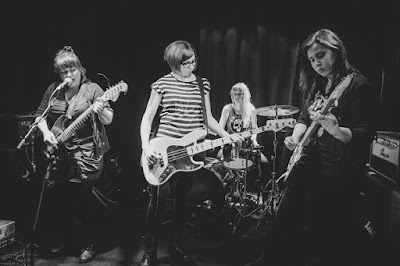 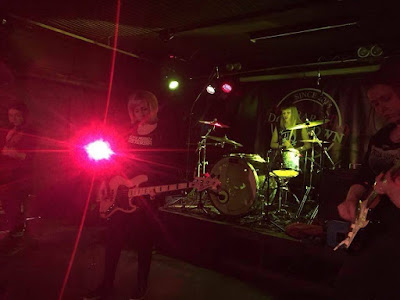 Q. When did Sister Disaster start? Tell us about the history...
Hanna and Kaa lived together as roommates about 10 years ago. Hanna and Riikka knew each other from the university and Riikka knew Sanna through common friends. No one of us had ever played in a band before, and some of us had never played anything at all. We were active in the punk scene in other ways. But one night, in 2014, Hanna and Riikka were in a bar full of regret, frustration and need for a change and came up with the idea of putting up band. Pretty soon Hanna asked if Kaa was interested and finally Sanna joined us a few months later. We started playing all sorts of cover songs (the Ramones, Dead Moon, No Hope for the Kids and finnish bands like Kollaa Kestää). To make our own songs was a huge step for us, but when we found our own sound and dared to leave our comfort zone, things started to happen really fast: we made a lot of songs and some were even quite good.

Q: Who are your influences?
We have never discussed about any influencers, and we all have our own taste of music. But we have a common fixation on 80’s synth/disco/post punk stuff and on finnish schlager. And we all love echoing and dark things in music so finding a sound that pleases us all has never been difficult.

Q. Make a list of 5 albums of all time…
David Bowie: The Rise and fall of Ziggy Stardust
Wipers: Is this real?
Joy Division: Unknown pleasures
Hurriganes: Roadrunner

Q. How do you feel playing live?
Playing shows was never a thing for us when we started. Actually we were terrified to play them. But after the first chaotic gigs we started to appreciate it: it was the only way to let people hear our music since we didn’t have any recordings. And of course it feels good to see that people actually want to hear us and get something from it.


Q: Tell us about the process of recording the songs ?
The songs always take a long time until they are ready. It usually starts with a bass line and everything gets build on that, and we play them a lot before recording them (except our latest release “Undertaker” which we made only few days before). So when we go to studio we have a really clear picture in mind about how they are supposed to sound like.

In studio we tend to eat well, drink lots of energy drinks and try to take it easy. We like spending time together and usually recording has been fun. We prefer recording as much live as possible.

We have made three recordings (a cassette, an EP and the upcoming LP) and every time has been a different kind of experience. But every time we have learned a lot. We would also like to learn to record and mix our own music. Our dream for our retirement age is to have our own studio. In space, of course.

Q. Which new bands do you recommend?
All of these are not so new, but we would like to recommend Finnish bands like Kuudes Silmä, Rue Morgue, Puhelinseksi, Generals and an awesome synth pop duo called Romanssi.

Q: Which band would you love to make a cover version of?
We have been dreaming of making a Depeche Mode cover.

Q: What are your plans for the future?
Our new LP “Away” will come out in few weeks. We’ve been very focused on that goal, and now it’s finally happening. So during the summer we’re going to play some gigs in Finland and hopefully in other countries as well and try to get those records sold. After that we can do what we most enjoy: spend long weekends at our rehearsal space and start making new songs.

Q: Any parting words?
Just want to say that it’s absolutely awesome & cool that someone so far away from Finland is interested in our music B).
*
*
*
Thanks