The Anti​-​Life with Bruises - An Interview 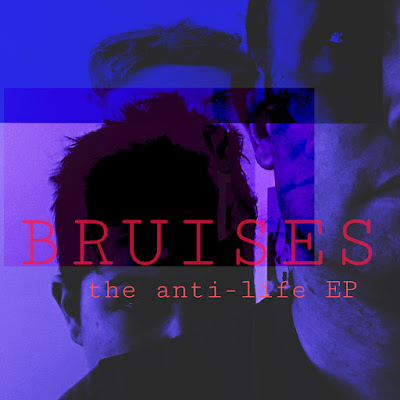 
Q. When did Bruises start? Tell us about the history...
J and I (Angie) have been playing music together longer than we have been married. We have been playing music together for 20 years, we were the rhythm section in bands (I’m a drummer and he played bass) for a solid 10 years. As those bands ended, we didn’t want to be done with music so we began writing on our own. In around 2008, we started writing as our own project. We had a different name that recently became Bruises.

Q: Who are your influences?
For me, Jimmy Eat World was a huge influence for years- as a drummer. Third eye blind, Paramore, frightened rabbit is probably an all time favorite. The late singer’s most recent project has been a big influence most recently and are called Mastersystems.

As far as Bruises songs and inspiration and influence go, Frightened Rabbit was suggested to me by a close friend and when I heard them I thought- this band gets me. The album Pedestrian Verse was where I started. Then I just wanted everything I could get. I really love a song that reaches into my heart. The headspace that a song creates usually gets me writing and thinking.

Jason would tell you that Rush was big for him as a bassist. Starflyer 59 is a favorite of his, Sensefield as well. His musical background has a lot of variety, hip hop, punk, heavy metal. He can digest a lot more than I can. As a musician, my bloody valentine has been a huge influence for him. Art through film effects and inspire J as well. Twin Peaks was big for him.

Q. How do you feel playing live?
Playing live is my favorite thing. Shaping our songs to be exciting live is fun. I hope to book a lot of shows for this summer.

Q. How do you describe Bruises´ sounds?
Rock, shoegaze, alt rock. You tell us. This is a hard one. We just write music that we like the sound of.

Q: Tell us about the process of recording the songs ?
Well, if Jason has any song ideas recorded, I go through them to see what grabs my attention. Sometimes it starts that way and I put melodies to it. Lately, I will write a song on guitar, add vocals and Jason builds it from there. We get a feel for the mood and tempo we want and add drums. The recording process is where Jason really gets creative. I love how the songs become more complete with his additions. It’s like I bring a skeleton of a song and he fully dresses it.

Q: Which band would you love to made a cover version of?
David Bowie or Queen would be a pic for me, sensefield, frightened rabbit since they’ve had such a huge influence on me. Jason says photograph by Def Leppard.

Q: What are your plans for the future?
To play a lot of live shows, write a lot of new songs.

Q: Any parting words?
Our goals are to write honest, quality music. We love it.
*
*
*
Thanks