Gold He Said with No Swoon - An Interview 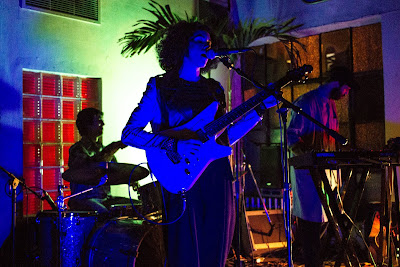 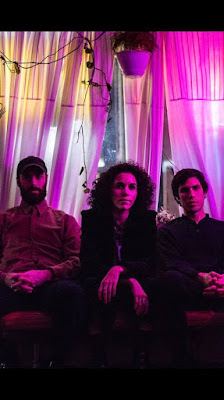 Q. When did No Swoon begin? Tell us about the history...
Tasha: No Swoon actually started as a totally different project. I was writing Indie-Folk tunes and Zack was already working on that project with me. We met Ricky on New Years Day 2015 and asked him to join. We rehearsed a couple of times, but it never felt right. I ended up leaving New York to spend some time at home in California and bought an electric guitar and some pedals, and just messed around, trying to have fun with the instrument again. I re-visited a lot of the music my mom played when I was younger (Love and Rockets, New Order, The Cure, Cocteau Twins, the list goes on) and that music felt like home again. Zack was diving in to the synth world and joined me in California a few months later. We started writing what are now the songs on our EP and when we came back to NYC in 2016, we asked Ricky to join again. We played around with the first few songs and it just finally felt right, it felt exciting again.

Q: Who are your influences?
Tasha: Cocteau Twins for sure, Love and Rockets, Beach House, Yeah Yeah Yeah’s

Q. Make a list of 5 albums of all time…
Tasha: Such a tough question, but in no particular order:
Cocteau Twins - Heaven or Las Vegas
Radiohead - In Rainbows
Bjork - Vespertine
The Beatles - Magical Mystery Tour
Bob Dylan - The Freewheelin’ Bob Dylan

Zack: my list is mostly jazz and classical because that is what is closest to home
Miles Davis - Miles Smiles
Charles Mingus - Mingus Ah Um
Ornette Coleman - The Shape of Jazz to Come
Julliard Quartet - Beethoven: The Late String Quartets
Georg Friedrich Haas - in vain

And if I can sneak one more in, Edgar Meyer - Bach Cello Suites


Q. How do you feel playing live?
Tasha: Playing live is always a surreal experience. I’m always nervous even when I don’t think I am, but I feel that’s a good thing. Once on stage though, I have no choice but to play and have fun. And it’s always a learning experience. One of our best shows, in my opinion, we couldn’t hear anything on stage except drums and a little bass. It really made me just trust the guys (and myself) that we knew what we were doing and to just give it everything.

Zack: I’m not a great piano player, so playing live is always a bit nerve wracking. I am trying really hard to not play wrong notes. Mostly though I want to give as much energy as I can into the music that we are making.

Ricky: It’s about having fun, and taking risks in the moments that allow it. I always look forward to the things that we don’t know are going to happen. When you play live, it’s not like a rehearsal or practicing by yourself, at least for me my nerves kick in and there’s this heightened sense of awareness. I don’t really have a choice but to be present...then the show ends and it’s always faster than expected.

Q. How do you describe No Swoon´s sounds?
Zack: To me our sound is all about Tasha’s Cocteau Twins vibed voice, screaming guitars, and Ricky’s huge rock drum sound. My role is just to fill out the sound as much as possible and make everything gel.

Ricky: There’s this balance, Tasha’s voice and Zack’s synths are smoother and rounder, then there’s the distorted guitar and heavy drums, but they work, it never feels like anything is clashing.

Q: Tell us about the process of recording the songs ?
Zack: The recording started with getting really good drum sounds. We went to a studio in Manhattan called Diamond City Studios that used to be John Cage’s place. Once we had drums tracked we spent the next few months tracking guitars, synths, voice and layering new parts. Once we felt we had everything in place we did mock mixes and produced the three songs. We added a heavy dose of electronic drum sounds and finished the arrangement with the new/experimental material we recorded. Then we brought in a master engineer, Jorge Elbrecht (No Joy, Japanese Breakfast, Wild Nothing), to mix the tracks. He absolutely killed it, and here we are!


Q. Which new bands do you recommend?
Tasha: I recently started listening to Dream Wife, they’re such a breath of fresh air and a killer band.

Zack: It’s a huge pleasure to have friends that make incredible music. The bands Moonheart and Ginla are two.

Q: Which band would you love to make a cover version of?
Tasha: Well, we already do a cover of my top choice, which is Joy Division. We cover “Disorder.”

Q: What are your plans for the future?
Tasha: Play as many shows as we can and record another EP.

Ricky: Play as many shows as possible

Zack: I can’t wait till we come to Brazil for a show!