UO I with Under Orbit - An Interview 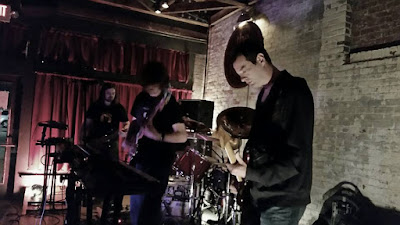 
Q. When did Under Orbit begin? Tell us about the history...
Js Curley: In 2015 I purchased a drum machine and borrowed a bass to begin a journey into lofi home-reccording/ demoing. I had met Drew White a few years prior after becoming a huge fan of his band at the time (Face on Mars). After my band Stellatone played a few shows with Face on Mars locally, we really connected on a mutual love of effect pedals/ soundscapes/ love of various bands. A few years later we formed the band a spacey heavy rock band MOON. After a few shows MOON eventually fizzled out and we all moved on to new projects. Post-MOON, Drew joined my project Stellatone playing rhythm guitar for a few years. In 2015 after drew and I finished a summer Stellatone tour, we began collaborating on some home-recordings. We did not become a “real” band until I booked a show opening for Zvi (Ron Varod of Kayo Dot/ Sabbath Assembly) and Hattiesburg heavies Year of the Vulture with another band that fell through. I called Drew and began assembling a backing band consisting of bassist Jonathan Lee Parks (Face on Mars/ex-MOON/Stellatone (keyboardist at the time)) and drummer John Littlejohn (Before I Hang/Emerald Heavy/ex-MOON/ Savage Master) to develop a live set. The current lineup still includes these members however due to heavy touring commitments with Savage Master, our friend Quinn Mackey (Nossiens// Dream/ Window) plays drums when John is not available.

Q. Make a list of 5 albuns of all time…
Jsc: This is what I’ve been digging at the moment:
Flaming lips- Embryonic
The Cure- Disintegration
Pink Floyd- Piper at the Gates of Dawn
Rush- Exit Only
Holy Sons- Decline of the West

Q. How do you feel playing live?
Jsc: Absolutely! If I can ever get out of graduate school we’ll definitely book more shows

Q. How do you describe Under Orbit´s sounds?
Jsc: Lofi, goth, experimental

Q: Tell us about the process of recording the songs ?
Jsc: Either myself or Drew writes a song’s skeleton then we meet up and record it. After the skeleton is down, we work out parts to overdub

Q: Which band would you love to made a cover version of?
Flaming lips, Sonic Youth, or The Cure!

Q: What are your plans for the future?
Get out of grad school, hash out another Under Orbit album, and hopefully take it on the road.

Q: Any parting words?
You can never have enough synths
*
*
*
Thanks