Shadow Me with Douse - An Interview 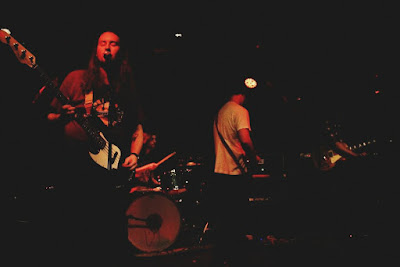 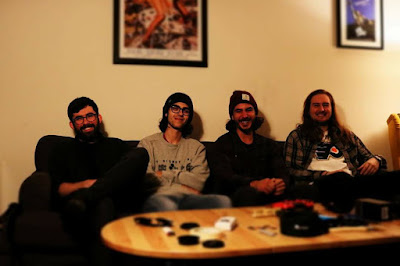 Q: When did Douse start? Tell us about the history…
A: Douse started a shade over a year ago. We conceptualized the band as a two-piece (Collin Fox & Josh Borosky.) We had initially hoped for the project to be much more metal influenced and pump out progressive, doomy jams (check out our first demo “Cavalier” on bandcamp.) Collin and Josh had been playing music together for years and had been in projects together before, but we knew we needed a full band to achieve our goals. The next few songs we wrote took a slight turn; We adapted a more jangly, smooth tone although we did not want to lose any of our rough edges. Our drummer, Dylan Smeltzer, was next to join. We played our first show in March of 2017 and then began to self-record our first release (“row”) immediately after. Kyle Cosgrove, a lifelong friend, joined the band as a second guitarist that summer. We focused heavily on live shows in the following months.

Q: Who are your influences?
A: All four of us have a pretty eclectic taste in music. Collectively though, we derive much of our sound from 90’s - early 2000’s alternative music. The grunge era, shoegaze, post-rock, hardcore punk, skramz and even some doom metal all influence our music. Not only do we take influence from music, but also from the people, places and things that personally speak to us. Lyrically our songs are personal, yet ambiguous. We’ll take ideas from anything; Horror movies, relationships or even the shitty car we are driving.

Q: Make a list of 5 albums of all time…
A: I’m sure this is a tough question for everyone. As said in the last question, we all have different tastes and influences. I wouldn’t say this is a “favorite albums of all time” list, but here’s 5 albums we all love, admire and wish we wrote:

Q: How do you feel playing live?
A: Gigs are the reason we do this. We try to bring the same energy to every show, no matter where we are or who we are playing with. We love playing mixed bills especially with out-of-town bands and other folks who truly support the DIY scene. We set up all of our own shows and do all the dirty work. Douse will play alongside any genre in essentially any venue. Our sets are loud, sweaty and full of spontaneity.

Q: How do you describe Douse´s sounds?
A: Everything Douse pumps out comes naturally. We do not have a specific process for writing nor do we ever have an end game when starting a song. We love tempo, time-signature and key changes within songs. We hope to execute that even more going forward. It’s important for us to tighten up our overall sound, yet stay true to everything that influences us. We like the fact that we can be loosely pegged as shoegaze, but still sound much different than your typical dream-pop band.


Q: Tell us about the process of recording the songs ?
A: Recording our most recent self-titled EP was different than our usual process. We are used to recording all of our own material. The first Douse release, row, was recorded all in Collin’s house. We recorded pretty much everything live and did very little editing. We used everything that we would have used playing the songs at a gig. Our self titled EP that just came out on May 11th was recorded at Midley Grange Studios. Dylan Nalyd recorded, mixed and mastered the whole thing and he killed it. We recorded it all in 1 day and used a lot of the same strategies we used in the past; No cutting and pasting. We wanted these tracks to sound exactly like they do live.

Q: Which new bands do you recommend?
A: Honestly there are so many new, amazing bands within our genre bubble. We will take this as an opportunity to plug some of our Philly/Scranton friends that we respect and admire: So Totally, Cheap Seats, Cavity Kids, Kenny 3, Idolizer.

Q: Which band would you love to make a cover version of?
A: We don’t generally do covers. We played a cover live once and it was “When you sleep” by My Bloody Valentine. It’s easy to cover bands that you love or bands that sound just like you. I’ve always found covers that are drastically outside the band’s genre the most interesting. We haven’t done it yet, but keep your eyes peeled for a Rod Stewart “Do Ya Think I’m Sexy” cover. That sax solo solo screams fuzzy guitar.

Q: What are your plans for the future?
A: We never stop writing. Expect another short release or two before the year is over. Playing shows is our favorite thing about Douse so playing bigger, more impactful gigs is the short-term goal. We hope to play with some more recognized bands and play in some new cities. We haven’t played out of Pennsylvania yet, so this summer we will be playing out of town gigs. Eventually a tour will be in the works, hopefully by the end of this year. Creating some merch, physical copies of our music and a music video are also on the agenda. We try not to think too far ahead.

Q: Any parting words?
A: First and foremost, thank you for this opportunity. We love speaking about Douse in any capacity to fresh ears. Secondly, stay true to who you are and be good to one another. Respect musicians and artists alike and treat people the way you would like to be treated. Make music for that feeling you get when someone you’ve never met tells you that your music impacted them in a positive way. Douse has no other agenda.
*
*
*
Thanks