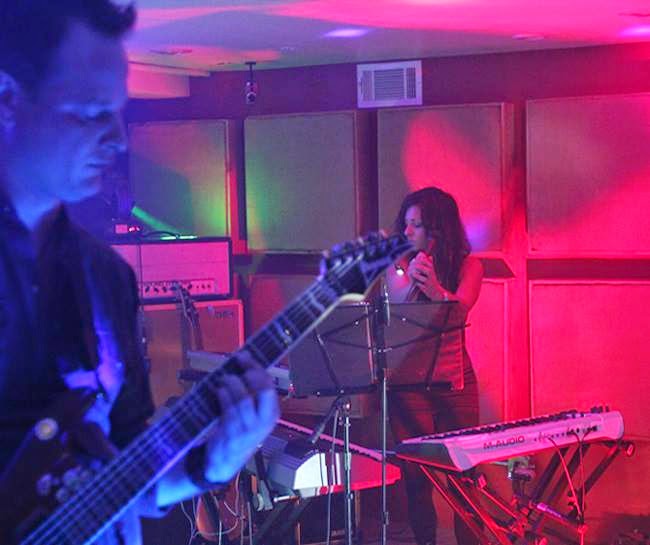 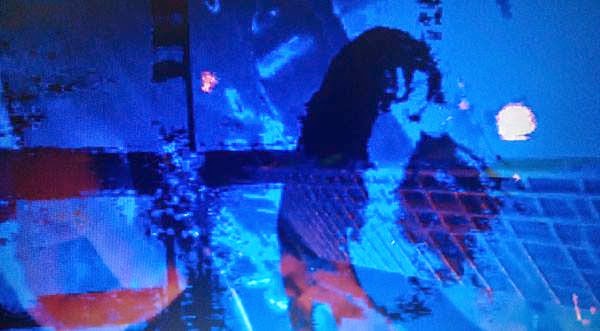 Q. When did Coloring Electric Like get started, tell us about the history...
Ben: Coloring Electric Like started as a concept when I was younger; figuring out the style, character, and textures that would be adapted to create the complete sound. The concept eventually evolved into a band when I first met Mia in 2010, and we instantly clicked artistically and musically, and quickly started crafting songs. Mia was the missing link in the formula. Since our union we have meticulously carved out the last key elements of the CEL sound.

Mia: We intially met online by file-swapping. I collaborated by adding keys, synth, and vocal tracks for a song that Ben had been working on. A song was born, then we met in person and went from there. I had been searching for "the" guitar player to work with - someone with a unique and heavily-effected sound. He was the one. And he was looking for a female vocalist. At first I wasn't sure that he would welcome all the tracks I laid down - which were much more than just the vocals he was looking for. But he took it with open arms and we've been inseperable ever since.

Q: Who are your influences?
Ben: It began when my mom was carrying me and my brother. She loves rock very much; she would share the experience with us by placing headphones on her belly for us to listen. My love affair with music developed at an early age. At age 14 I got my first electric guitar and my brother was learning drums, and the band thing just happened organically; I taught my brother guitar, and he taught me drums. We were listening to bands such as Cocteau Twins, Lush, My Bloody Valentine, Curve, Slowdive, Medicine, Mercury Rev, Verve, Jane's Addiction, NIN... So, I could say some of those bands left a mark on my style, but I innovated my own sound to stand alongside and compliment the musical saints of my genre and time.

Mia: British 80s and 90s - like Depeche Mode, The Smiths....industrial - like Nine Inch Nails....downtempo and trip-hop - like Massive Attack and Porishead. In that order. And more recently I hear elements within the kind of stuff Bass Nectar, Gorillaz, Chemical Brothers puts out that really turns me on. And the art of creating music from "noise" is a fscaination for me. I hear music in the repititive grinding noises of a machine, and I hear music in the sky because of how Bach expressed it perfectly in Air. So I guess I've been influenced by all these sounds that make up who I am, in my own creation of musical identity.

Q. Make a list of 5 albums of all time…
Ben:
- (I don't know if this is allowed. A tie.) My Bloody Valentine - Loveless and Isn't Anything
- Curve - Doppelganger
- Medicine - The Buried Life
- Verve - Storm In Heaven
- Cocteau Twins - Pink Opaque

Mia:
- Peter Gabriel - Soundtrack for The Last Temptation of Christ
- The Smiths - the Queen is Dead
- Pink Floyd - Wish You Were Here
- Massive Attack - Mezzanine
- The Beatles - White Album 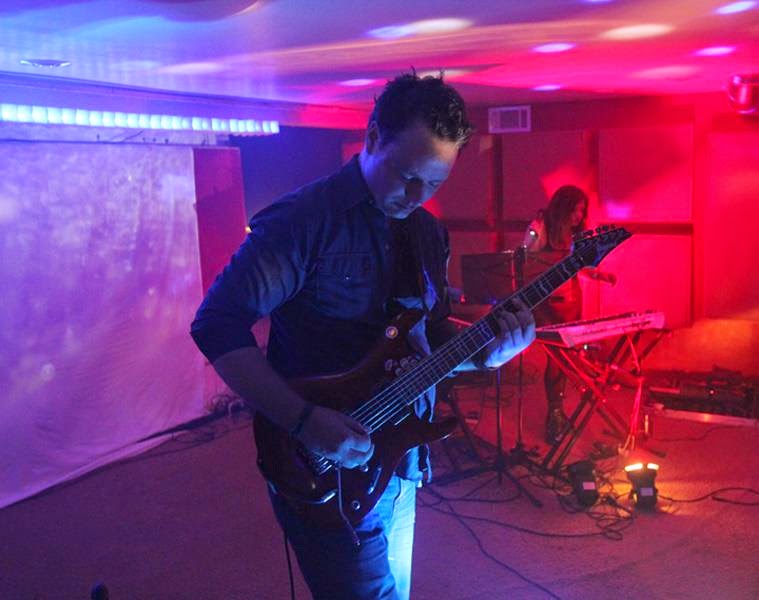 Q. How do you feel playing live?
Ben: Playing live is always a rush. I get a special high when I know I'm moments away from the stage. It's invigorating and scary at the same time. But, when I'm on stage, I step out of my ego and I live in the sonic moment, manifesting sound.

Mia: I feel great, especially when I know the people in the room "get it," whether it's a big or small audience. I guess that's what I shoot for - someone digging our sound is the greatest feeling.

Q. How do you describe Coloring Electric Like sounds?
Ben: Dark, sexy and poignant. Heady, sensual and raw.

Q: Tell us about the process of recording the songs -
Ben: When we get a groove going we will lay down a preliminary recording on our DAW, track by track until we have a working rough draft to embelish on. We innovate to make the song better then get it ready for the studio, where we lay down track by track; usually with Mia's synth and percussive tracks down first, then my guitars, noise, and bass parts (and Mia and her bass parts), then live/accustic drum parts, and lastly Mia's vocals. After that, the sound engineer, Mia, and I set down for a lengnthy mixing session, then off to mastering.

Mia: We are in the studio right now recording our first album. Duncan Calver is our recording engineer and producer, and good friend who has his own love-affair with shoegaze sound. So his technical skills, ear, and instinct were what we were looking for. The recording sessions are being done at Blue Velvet Gold Mine Studios in Portland. Sometimes the act of recording seems like more of a mechanical operation when it comes to me laying down layers of synth lines. The interesting part is when we start to do equalization on the tracks and things really start to pop out just the way they should. I have not laid down the vocal tracks yet, but I'm sure that will be a much more emotionally involved process.

Mia: I'd like to show support for fellow Northwest musicians on this one. We've been honored to share the stage with so many. So although these bands are not necessarily in our genre, they all kick ass: Vibragun, Patrimony, Pinscape, The Stein Project, Brut, Analog Mistress, When We Met, World's Finest - look out for them comin' your way!

Q: Which band would you love to make a cover version of?
Ben: Curve. Anything and everything.

Mia: That's a great question....we've kicked around some ideas, and actually have yet to perform any covers. We've wanted to focus on getting our own identity out there. Although there are plenty of obvious choices, I think it would be awesome to cover a song that you'd never expect us to do, and make it our own. Like the other day, I was listening to Rage Against the Machine and thinking "wow, this would be so much fun for us to do our way."

Q: What are the plans for the future....
Ben: We are to finish our debut album this spring, and we plan on using that to tour with, and to grab a label and promoter. Then, we'll be ready to get to work on a second album, play out consistently, and move up to the next level.

Mia: We plan to tour outside of Portland this year, and are just starting to carve out destinations like Washington, Idaho, California, and Colorado. But I think our real potential lies in getting our music heard by people all over the world that really jive with our sound. That's why I think getting good recordings out there is key. Then hell yeah, I'll play anywhere!

Q: Any parting words?
Ben: I wanted to create a vehicle that would help convey my ideals to people's ears so they can be enlightened, and uncover the veil of uncertainty, and see the world as it truly is - a stark reality, exstisting only from our manifestations, our presence. What is now in front of your eyes is the only thing that exsists, and it is for you. You will fail only if you let it happen; if you let/believe that others have the power to dominate. Aren't we all men, and only men? The playing field that is life is level. The truth is what you perceive. There are many, many versions out there of the truth, none being the ultimate.

Mia: I guess just ask people to check us out. Yeah, you, the one reading this interview. Take a listen and let us know if you dig our sound! Get in touch - we'd love to hear from you. We'll even write back! Your ears are the reason we do what we do. Find us on Facebook or at our website www.coloringelectriclike.com
*
*
*
Thanks