Songs of Travel and Other Universes with Tannhauser Orchestra - An Interview 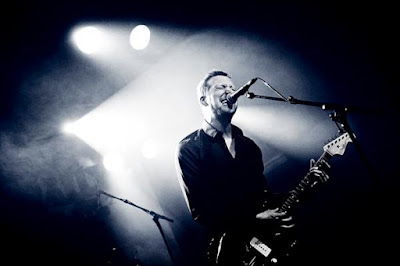 
Q. When did Tannhauser Orchestra begin? Tell us about the history...
We’ve actually been around for quite some time. Tannhauser Orchestra, or simply Tannhauser as we were called back then, started out in 2007. It was me (Erick de Deyn) and four other members and we all lived in a college town called Leuven, in Belgium. By the time we had released our first album (‘Löven’) and a couple of EPs, the others had either quit or been let go, so I basically did the next album ‘Songs Are What We Are’ entirely by myself, with one guest song by Geert Janssens. Although that was an interesting experience, the process did feel a bit sterile.

By that time, around 2012, I had also begun to play bass and sing in Blissard, a heavy rock band formed by Geert and his buddy Kristof Geutjens, and so I asked Geert and their drummer Brecht Tijskens to join Tannhauser so we could play some shows. Gradually, the music became a lot heavier and darker due to our shared metal and electronic influences. Since there was a Spanish industrial band who were also called Tannhauser, we decided to add ‘Orchestra’ to our name.

We did three records together (‘The House of Sleep’, ‘Her Mountain’ and ‘Veneralia’) that were generally well received but the band never really took off, commercially speaking. By 2015, we all had families and jobs, so when Brecht decided to quit, we sort of went on hiatus. It was only in the fall of last year that Geert and I decided to pick up again where we had left, by working on some old material that was left over from our last album, and to release that as a free EP on Bandcamp.

And it actually went down pretty well. People seem to like it and we’re excited about playing music again, so we’re currently preparing a new, full album.

Q: Who are your influences?
I had played in bands before Tannhauser Orchestra, but I only really found my musical Holy Grail in my twenties when a friend introduced me to My Bloody Valentine. Their album ‘Loveless’ was an absolute epiphany for me and for a while I didn’t listen to anything else. It led me to quit my other bands, to focus on making shoegaze music in my home studio, which became Tannhauser Orchestra. Other than MBV, a wide range of artists have had an influence on our sound. I listen to a lot of classical music, metal, indie and electronic music.

Q. How do you feel playing live?
We like it very much, although sometimes it’s hard to decide what parts get played live. On the records, we often do a lot of overdubs but on stage we only have two hands each, so you have to make choices.

For the next record, however (which should come out by the end of the year), we’re currently figuring out how to set up our equipment so our live shows become as sonically immersive as the songs are intended to be.

Q: Tell us about the process of recording the songs?
First of all, Geert and I do some demos to give each other a general idea of what each song is about, with the basic vocal and instrumental parts in place, so we can mutually build off of that. Then we go into the studio and properly record and mix everything, usually in a few sessions spread out over several months. Stuff tends to get changed and added up until the very last minute. The day when we were scheduled to master the ‘Songs of Travel and Other Universes’ EP, we were still adding things here and there and tweaking the mixes.

Q. Which new bands do you recommend?
To shamelessly plug a few current Belgian bands that we think are cool: you should check out Kassei from Geraardsbergen (indie math rock) and Wiegedood from Ghent (black metal).

I also think Mahr are brilliant: they’re this cosmic black metal collective on Fallen Empire Records. And I’m excited for the new Westkust album coming out in March, the pre-released single is awesome. The new Business of Dreams album, ‘Ripe for Anarchy’, is also pretty good I think – kind of a Real Estate vibe.

Q: Which band would you love to make a cover version of?
You know, not a day goes by without me thinking at some point ‘We should do a cover of this’. In the past we’ve recorded songs by Yo La Tengo, Stereolab, Dinosaur Jr... It’s always fun to mess around with tracks you love. And if we ever get around to it: I’ve always wanted to do a version of Del Shannon’s 1965 hit ‘Keep Searchin’ (We’ll Follow the Sun)’. Geert’s dream cover is Bryan Adams’ ‘Heaven’.

Q: What are your plans for the future?
Make the new record our best one yet, and hopefully do some shows to promote it.

Q: Any parting words?
Thanks for reaching out to us, Renato! We think your blog is awesome. You’re doing great work, man.
*
*
*
Thanks