Control with Cosmic Waves - An Interview 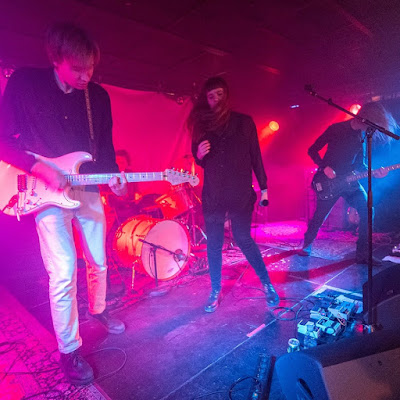 
Q. When did Cosmic Waves begin? Tell us about the history...
Guitarist Martin, originally hailing from Luxembourg, met Lasse (drummer) at an A Place To Bury Strangers concert because he sold him a spare concert ticket. That was around summer 2016. They ended up getting along really well, while also sharing the same music taste, so they decided to meet up to jam and straight away agreed to form a band. They then dragged in singer/ guitarist Lisbet who had just moved from Sweden to Copenhagen and were soon a strong trio, whilst lacking a bassist. After releasing their debut EP and playing all around Denmark with shifting bassists, Steffen auditioned for the missing spot as bassist through a post on facebook in summer 2018 and the final version of Cosmic Waves was born.

Q: Who are your influences?
It’s safe to say, that we’ve been listening to a hell lot of the Cure lately, especially their album Disintegration. Otherwise all things eighties, be it pop, post punk or shoegaze, as well as the post millennial shoegaze/ post punk/ goth revival.

Q. Make a list of 5 albums of all time…
It’s so difficult for us to make this list, as we like a very broad spectrum of music. But if we had to boil it down to 5 albums on the spot it would be:
1. The Cure: Seventeen Seconds
2. The Raveonettes: Night Comes Out EP
3. A Place To Bury Strangers: Exploding Head
4. Leonard Cohen: Songs of Love and Hate
5. Nick Cave & The Bad Seeds: Henry’s Dream

This list is admittedly not very shoegazy, even though we obviously love bands like Sonic Youth, Salem 66, The December Sound, Ride, Slowdive and whatnot.

Q. How do you feel playing live?
For us, playing live is the best part of being a band. For us, one of the most important purposes of being in a band is to provide inspiration, entertainment and self-realisation. The best thing is to play new venues and to people who haven’t seen you yet. This makes it a fresh and unprejudiced experience for us and the crowd, or so we would like to think.

Q. How do you describe Cosmic Waves´ sounds?
It’s a blend of a lot of reverb, delay and chorus with some added fuzz here and there. There also tend to be big shifts in dynamics within the songs, going from introvertly melancholic, towards outward aggressiveness and the battle is to balance both those forces. What seems funny is, that many people seem to hear a lot of different things in Cosmic Waves and we’ve been compared to everything from Mazzy Star to Sonic Youth.

Q: Tell us about the process of recording the songs ?
For recording Control we did a massive change of location and recording strategy. Versus the first EP being recorded in a church on the island of Bornholm with a fairly big production, this EP was recorded straight in to a 16 track in a tiny studio in the north-west area of Copenhagen with recording engineer William Smith. His whole philosophy was for us to play all the songs live and to nail every song in no more than 3 tries. So, in result of that, there are shitload of mistakes and improvised guitar things going on all over the EP. But most importantly, we feel that there’s a sense of authenticity and urge in the songs, which is a good thing in our world. As all the songs on the EP are recorded live as a whole band, there is a real sense of ‘’these songs actually happened to sound, just like they were recorded’’ as we also got all the sounds straight from our pedalboards.

Q: Which band would you love to made a cover version of?
The Fall: Carry bag Man
The Modern Lovers: She cracked
Sonic Youth: Dirty Boots
Madonna: La Isla Bonita

Q: What are your plans for the future?
Hopefully to break the barriers of Denmark – but hey, this is already sort of happening with this interview! But yea, to play a whole lot of concerts abroad and to record a full-length album.

Q: Any parting words?
It’s really nice that there is a blog like yours that gives space to small, unknown and upcoming bands. Thank you for reaching out to u
*
*
*
Thanks