Etiolation with Nibiru - An Interview 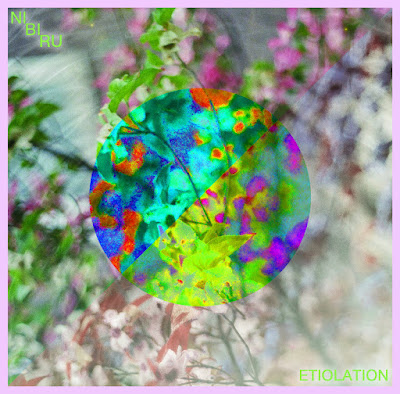 
Q. When did Nibiru begin? Tell us about the history...
Ben and I (mark plant) were in a band in St Louis called Times Beach together back in 2012-2014, and wanted to start a new band when I moved back into town . I met Simone through a mutual friend and when they said they like Slowdive I said “cool wanna play bass in a band?” and that got things rolling. We started as a 4 piece, with Ben on guitars, me on synths, Simone on bass, and we had we had two drummers, Jimmy and Tyler, before we switched to using a drum machine. Things started to flow really well with the drum machine and we put together “Etiolation” in about a month.

Q: Who are your influences?
We draw from a lot of different places and don't have any specific sound we were directly trying to replicate. Both me (mark) and ben have played in hardcore and punk bands for about 10 years and the intensity of that is still a huge influence on our sound. Simone is more into folk music/r&b, but the 3 of us are all into noise pop and I think we merge all of those influences together. We also love video game music, specifically Chrono Cross, Metroid (the whole series), Phantasy Star Online, Earthbound, and definitely the Wii shop channel music.

Q. How do you feel playing live?
We play really loud. It's important to us for the music to be felt and even hurt a little bit when it gets intense. We're still pretty new to playing with a drum machine and we want to make sure that you can feel it and dance to it. We play mostly DIY shows so it's usually intimate and swirling with whatever cheap spinning lights we can find.

Q. How do you describe Nibiru´s sounds?
We are a raw pop band. The guitar sounds we were going for were at first were heavily influenced by raw punk bands like Confuse, Disclose, Mob47, etc. and we keep radical politics and those ethics in mind with our sound and the kinds of shows we play. (Brazil has a lot of really great raw punk also!!)

Q: Tell us about the process of recording the songs ?
We record everything ourselves between the two houses we live. We used cheap digital 8 tracks and free computer software for almost all of it. We recorded the guitars and bass in Ben's basement and the vocals / synths / and drum machine were all done in my bedroom.

Death Valley is great synth pop, they're about to put out a bunch of new stuff too:
https://deathvalley69.bandcamp.com/

On the darker side of synth pop, Black Sage blew me away last year: https://blacksage.bandcamp.com/

and Natural Man is one of the most fun bands I've ever seen in general:
https://mutants4nuclearwaste.bandcamp.com/album/natural-man-the-flamin-hot-band

Q: Which band would you love to made a cover version of?
We've already done a Talking Heads and a Gauze cover set for Halloween, and I think it would be really fun to do Algebra Suicide or Broadcast. We've also been learning “lost in the supermarket” by the Clash.

Q: What are your plans for the future?
We're driving home from playing a few days out of town as we type this out. We're going to try to do a bigger tour on “Etiolation” and work on an LP throughout the rest of the year.

Q: Any parting words?
We wanna give a shout out to millennial pink and related color pallettes for all that they've contributed to the aesthetic nature of our band!! Don't want to leave out dark greens and light brown earth tones as well. Thanks again!!
*
*
*
Thanks