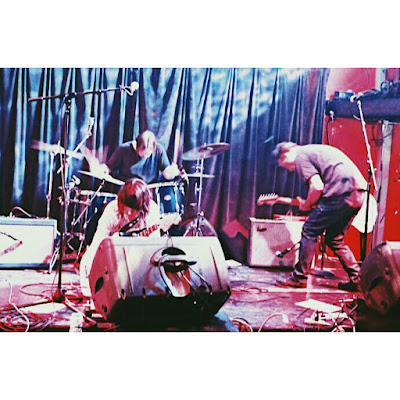 
The songs that made the cut for Dream the Currents are stylistically pretty individual. Part of the challenge for everyone involved in this project was to try and make this very diverse selection of songs sound cohesive.

On our last release (2018’s Captured in the Light) we recorded and mixed at several different studios, including some time at Earwig Studio in Seattle working with Don Farwell. Recording with Don was really enjoyable and creative, so working there again was an easy choice.

We had played these songs live for some time, plus a fair amount of demoing in GarageBand, so the basics happened rather quickly - which allowed us some extra creative time. We were able to focus and experiment with vocal ideas, hook up different pedal combinations, and record multiple takes of feedback. Each song was approached individually, and as we made progress, we made the choice to find things that we had not done before. We were conscious of trying to keep some continuity, like in our basic guitar track tones, general placement of instruments, etc., and Don then tried to keep the whole project in mind as he was mixing.

For mastering, we turned to Levi Seitz (Black Belt Mastering) again - he’s mastered all of our releases so far. He did a good job of making these tracks feel like a “whole”, and helping the flow from track to track.

PARACHUTE ON:
[jd (julie:guitar/vocals)] After we developed the verse/chorus pattern for this, I was listening to a practice recording and the lyric “another broken shore” popped into my mind. Which immediately brought up visions of the refugee crisis that was all over the news at the time. So that’s what I was thinking about, people who have had to leave their homes and are trying to find a new one.

[gt (gary:guitar/vocals)] Like most of my favorite things we have come up with, this song finally coalesced through an accidental few seconds at the end of a run-through. Electric 12-string makes a debut with twined duo guitar playing, plus Julie’s rich vocal harmonies gives this a jangle psych facet. Drone-y and hypnotic.

[jd] The guitar interplay on this one reminds me of a lot of the stuff on Swervedriver’s “I Wasn’t Born to Lose You” record. The second half of this song is primarily instrumental, and in my mind it kind of represents the journey these displaced people are having to make.

[cr (charlie:bass)] There comes a time in every bass player’s career where you have to ask yourself "what would Kim Deal do?" Because Kim is usually right.

[jd] This is a really good one to listen to with headphones.

FOR A DAY:
[jd] I was trying to figure out a guitar thing that Gary had sent me, but I couldn’t get it right and ended up mutating it more and more until it ended up like this. To me it sounds like one of the poppier Cure tracks at its core, but then Gary’s guitar accents on top are pure early Pretenders. The overdubs on the bridge (which are actually all guitar) have a very ‘80s vibe too. The little falsetto bit I sing on the chorus is something new for me - in fact, as deceptively simple as this poppy little song sounds, it was more of a stylistic stretch than one might expect. The lyrics are still super depressing though.

[cr] This is a simple-sounding part that got weird as a result of the recording engineer suggesting I try to play the whole song on the E string. Which would have been fine had I not written the whole part tuned down to D.

[jd] Originally we weren’t going to include this track on the EP, because it felt like a stylistic outlier. But the rest of the songs are so diverse it actually ended up making sense to include it.

MINOR MENDINGS:
[jd] Before we found our current bassist, the other 3 of us would get together for sessions with just guitars and drums. Rian pulled out this cool beat one day, and I came up with the basic guitar pattern, and Gary added a variety of decorations on top, all part of a free-form jam. We played it for like 10 minutes, recording the whole time, then I used that recording to cobble together a “map” of where I thought it could go. This was like two years ago, and we actually tried to record it for our previous EP unsuccessfully. That turned out to be a blessing in disguise because Charlie ended up adding a lot of nice touches to it when he joined us, like the “heartbeat” bass at the very end, and then playing it live for a year really helped us hone it.

[gt] A sprawling, epic Chinese puzzle that Julie orchestrated from a recorded jam that appeared out of the blue. Minimalist exercise in maximizing dynamic shifts. Lesson learned - always hit the record button!

[jd] Lyrically this one is difficult to explain, but on a super-simple level it’s about letting oneself get deceived by thinking that there are easy solutions to complex problems.

[cr] The starting point for me on Minor Mendings was a demo recording done by our drummer Rian. It was less of a road map and more an encyclopedia full of different parts and variations, and then variations of the variations. I imagine that in some alternate timeline there exists an elegant, well thought out, and beautifully played version of this song with Rian on bass. What I'm playing is the garbled distress signal from that dying dimension.

[jd] While recording our guitar overdubs, Gary said "This song is like a six-minute War and Peace based on two words."

WHERE YOU BELONG:
[jd] 2018 was a difficult year for some of us. For my part, I hurt my back early in the year and had to have spinal surgery, which I’m still recovering from. Gary had trials of his own that led to the passion on this song. It’s super fun to play this rocker live.

[gt] A howling hurling meteor of life challenges and lessons… If you are alive you belong. Molten psych guitar feedback, yes please!

TWINKLE, TWINKLE, BÊTE NOIRE:
[jd] I pretty much wrote the bulk of this song in a single day, which is highly unusual. I was on vacation by myself and had a loaner guitar and a lot of free time on my hands. All the parts just kind of tumbled out one after the other until there were enough parts for a song, but no lyrics. I remembered a piece of unfinished poetry I really liked that a friend had on her FB page, and tracked it down and used it as the starting point for the lyrics. Once they started working I contacted her directly and asked for her permission, and if she would work with me on the final lyrics, which we did via chat during the course of the day. I remember sending Gary several GarageBand iterations during the process, just to have a sounding board.

[gt] A deceptively woozy and hazy pop song that sounds like a zero-gravity simulator, or dandelions blowing in the wind. Tracked some acoustics to layer in without a plan of how or where they might be used.

[jd] The revisit of the acoustic guitar on the outro was a spontaneous mixing decision. I think it ends the EP beautifully.

[cr] Miles Davis said "It's not the notes you play, it's the notes you don't play." The decision to drop the bass out of the bridge turned what was sounding repetitive into something completely unique for us. The less-is-more approach in all its glory. This is also the song that makes me wish I'd stuck with learning the cello.

[jd] The original poem is simply: