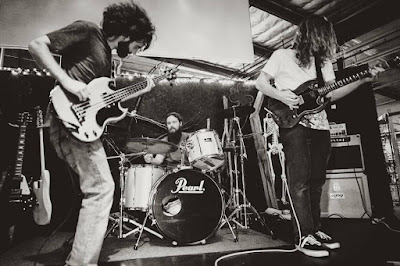 Q. When did Aunt Cynthia´s Cabin begin? Tell us about the history...
It actually started with a surf rock band Anthony and I played in together. It was a 4-piece and ended up fizzling out after a couple years, but Anthony and I learned how to play with each other really well. After that band broke up, we started writing new music in my garage, didn't hold any boundaries and just kinda let our writing wander to where it wanted to go. It seemed that everything we wrote was revolving around this dark, eerie western sort of drugged out type rock and roll. At the time, Anthony was also playing in another band with Jeremy but the 3 of us weren't playing together yet. We recorded our first twosongs with that same vibe, On The Mountain and Solitary Man, in my garage using just two mics and a tube preamp. Jeremy caught on to what we were doing very soon after, and the three of us started jamming. After just an hour of our first practice we were like ok, this is it.

Q: Who are your influences?
All over the place really. I think all of us root back to Hendrix, Zeppelin and Sabbath at the core, but from there it branches. I'm a big fan of Ty Segall, Sugar Candy Mountain and Dead Meadow, while Anthony issuper into Brand New and Nirvana and Jeremy is definitely influenced by All Them Witches and anything with a tribal heartbeat.

Q. How do you feel playing live?
There's nothing more rewarding than playing music for people. I'm super self-critical, so I'm never one to be like "hey that was an awesome show guys", but we've had those nights where we're just on fire and the crowd is super into it, those are the nights we remember.

Q. How do you describe Aunt Cynthia´s Cabin´s sounds?
Eerie psychedelic desert rock. Dip a spring reverb tank into a bowl of dust, whack it on the side of a table a few times and wire it to a tube amplifier. Then add shredding tribal drums and a ton of low and and feel on the bass. And that's us.

Q: Tell us about the process of recording the songs ?
We record everything ourselves, we're very minimal in how we mic everything and use our gear. Usually before we start an EP, we spend hours moving the mics a half-inch here, a half-inch there, adjusting gainsand overdrive, but once we've got it and the tones are right, it's really just the room that captures us. The mics are just there to document it. We do all this in a 10'x14' private studio space that doubles as astorage unit, so it's tight quarters when we're in there. It's basically a walk-in closet. But there's little tricks we can pull to making it sound like we're in a bigger room. I mix everything at my apartment, so I'll send out mp3s of the work in progress to the rest of the band and they'll listen and give me feedback. It's a collaborative effort.

Q. Which new bands do you recommend?
Well I'm not on blogs everyday scouting new bands, but "new" for me are Acid King, Khruangbin, and Michael Rault. I can't stop listening to any of their music.

Q: Which band would you love to made a cover version of?
I always thought a Strokes cover band would be awesome. But honestly I think if I really had to choose, I would rework all of Elton John's music and make it appropriate for our genre and just run with thesongwriting. I'm a huge closet Elton John fan.

Q: What are your plans for the future?
Recording more music, touring and keeping the dream alive! Seriously though, the Mud Room #13 release has been epic so far, it's getting a ton of radio play and really great attention and we couldn't be happier with the feedback. We're recording a new EP now and the sound is continuing to evolve, very stoked with how things are shaping up. Then touring, then do it all over again!

Q: Any parting words?
Mud Room #13 is out on all streaming platforms and we'd love to hear your feedback! Follow us on Instagram for show dates @auntcynthiascabin and feel free to shoot us a message there or Facebook and say what's up! We'd love to hear from you.
*
*
*
Thanks