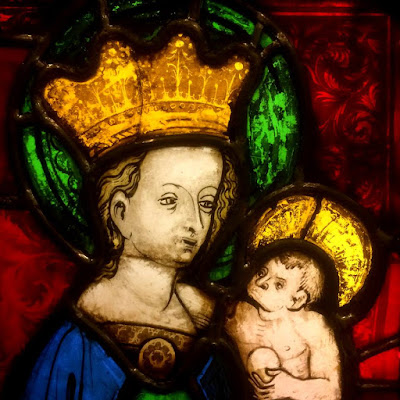 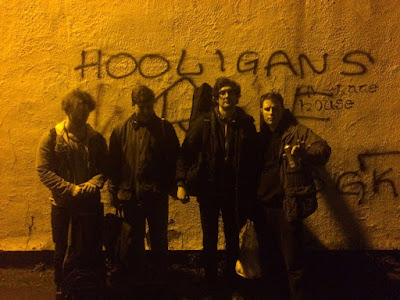 Q. When did Unpaid Intern begin? Tell us about the history...
Patrick: Tom and Chris are brothers. They play guitar and bass, and both sing. They grew up in Rochdale, north Manchester, where Tom went to school with Mooney, who plays drums, and I think they played in bands together when they were teenagers – they can tell you the details. I met Tom in London when we were both studying because I lived with his cousin, Siobhan. We bonded over music and watching sport – mostly football. After a while we started a band called Khaos Alberto (here’s a video we made https://www.youtube.com/watch?v=JzgbeqS6dEg), I don’t think that band is defunct but we haven’t played together in a while. Khaos Alberto used to have a fake unpaid intern communicate on behalf of the band. Our Unpaid Intern character, rather than the band they ultimately inspired, was a hyper-capitalist try-hard who really wanted to land a big job and make money.

Tom moved back to Manchester where he found out that Chris was joking about starting a band called Unpaid Intern. Chris made a few tracks and so did Tom, they both mentioned it to me and we just thought it was a laugh. Then I moved back to Manchester, where I’m also from but a different part of the city (Stockport), and lived with Tom in Salford. We were talking to people about starting a new DIY space (which now exists – it’s called Partisan Collective), they needed money so some Manchester music people were putting on gigs and we thought Khaos Alberto could play. After we couldn’t get in contact with one member of Khaos Alberto, Tom and I lied that we had started a kosmiche band called Unpaid Intern to our friends Tash (a promoter, O.J. Recs) and Tom (who is in the Fruit Tones – a really great Manchester garage rock band). Luckily, they said we could play with Fruit Tones, Turf (RIP) and Proto Idiot but then we realised that we had to learn five songs in an afternoon then go straight to the gig. The gig went well, that was a surprise to us, and people began to ask us to play other shows. That has continued ever since, people ask us to play or record and we can’t quite believe it. So we were going for some time with our old drummer Max and recorded Unrivalled Work Ethic for Havana Tapes. Then Max moved to Canada (he’s since moved back) and Mooney joined. We’ve been really lucky because a few local promoters (Cold Callers, O.J. Records, and Comfortable on a Tightrope) have put us on some interesting bills and we’ve played with people like Downtown Boys, King Champion Sounds, Priests and loads of other shows that we have really enjoyed.

So, we’re pretty much a joke that has gone too far.

A video that Chris made for us – https://www.youtube.com/watch?v=B-NHKKbijKk

Mooney: M - my history with this band is relatively short. I’ve known Tom and Chris for over ten years, having met through mutual friends and sharing the same interests, eventually leading us to playing in a couple of bands in our teenage years. We didn’t have much contact when we all went university, but got back in contact when Tom moved back to Manchester. Earlier in 2017, I was asked if I fancied jamming with Unpaid Intern where I then met Patrick. We jammed out the set and then that was that. I think I’m now in the band.

Q: Who are your influences?
Tom: We get told we sound like this band called Duster sometimes, oddly enough I’d never heard them until I was told we sounded like them.

Patrick: Tom and I really like Os Mutantes. Not just flattering the Brazilian audience. I’m really interested in Swell Maps and all the stuff that’s slightly like them (Raincoats, Sonic Youth, Pavement). I’ve been getting into in experimental music for a long time – recently I’ve been listening to Evan Parker, all the British post-60s improvised stuff and read David Toop’s book Into the Maelstrom. Recently I’ve been trying to incorporate this into how I play the guitar more than ever, I’m very enthused by scratching and plucking my guitar in unusual ways at the moment. Our band sings Thin Lizzy in the car. The last album picked by another band member in my house was the Neil Young and Crazy Horse album Zuma. I hope that gives you an insight. Oh, the Irish comedians the Rubberbandits are a huge influence on our band – they started an artistic movement called gascuntism and we consider ourselves followers of their artistic manifesto.

Mooney: Drummers who’ve influenced me would probably be a mixture of Jon Theodore, Thomas Pridgen and Idris Muhammad. Bands would be the Mars Volta, Justice and Sergio Mendes.

Q. Make a list of 5 albuns of all time…
Tom: These are my favourite albums that I physically own as a record.
- Pavement - Crooked Rain, Crooked Rain
- Burial – Untrue
- Slint - Spiderland
- Angelo Badalamenti and David Lynch - Twin Peaks: Fire Walk With Me OST
- The Beatles – Revolver

Patrick: That’s a hard question. I’m going to change it slightly to make it like a long-running BBC Radio 4 show called Desert Island Disks where the guest picks eight recordings and a luxury item to help them survive if they are stranded on a desert island.
1. ‘Manchester United Calypso’ – Edric Connor
2. ‘The Boys are Back in Town’ – Thin Lizzy
3. ‘The Sprawl’ – Sonic Youth
4. ‘Oceanic Beloved’ – Alice Coltrane
5. ‘Dance of the Inhabitants of the Palace of King Philip XIV of Spain’ – John Fahey
6. ‘Non-alignment Pact’ – Pere Ubu
7. ‘Ando Meio Desligado’ -- Os Mutantes
8. ‘X Gon’ Give it to Ya’ – DMX
Item: the green armchair from my living room

Mooney: Impossible to pick so I’ll choose 5 tracks/albums that are currently on repeat
0. Gumboot Soup - King Gizzard and the Wizard Lizard
0. Kali Uchis/Tyler the Creator/Bootsy Collins - After the Storm
0. The Oh Sees - the Static God
0. Flat Worms - Flat Worms
0. Kaytranada - 99.9%

Q. How do you feel playing live?
Tom: Usually pretty good. We tend to grow into it and become more expressive as the set goes on. If we played for longer we’d probably end up hanging from the rafters like Iggy and the Stooges. As it stands we awkwardly hobble about the gaff looking at our feet.

Mooney: Very relaxed before a show. I enjoy playing the songs we’ve made. And I have confidence in the lads as they’re a talented bunch. So it’s a lot of fun for me knowing everything will go fine.

Patrick: Pretty anxious. Amused – if it goes wrong. It can be enjoyable, sometimes, or even slightly exhilarating. The people who come to our shows – I call them ‘our shows’ when we’re usually the support, what a narcissist? – are typically very supportive and welcoming so that really helps to ease the tension that I feel personally.

Q. How do you describe Unpaid Intern sounds?
Tom: To rehash a comment about an old band – somewhere between a dog’s dinner and a monkey’s breakfast.

Patrick: Sometimes bearable or the bar band from the edge of the universe.


Q: Tell us about the process of recording the songs ?
Mooney: Organised chaos. It’s slightly messy and takes a bit of time, but it gets done.

Patrick: That’s a question for Tom. We’re currently discussing how we’re going to record a single and an album. The album is going to be called Palace Bingo.

Tom: It has been a process of multi-tracking and overdubbing but we are moving now towards more of a live sound. I like the idea of artefacts and mistakes being preserved.

If you listen to some of the quieter moments of the EP that is on Bandcamp (at a reasonable price, I might add) you can hear the 98 bus go past and rattle the windows of our old house. We recorded a lot of it in the living room and tested out the mix and mastering in my fiancé’s car.

I intend to sound a bit more, and also a bit less polished for the album.

Q: Which band would you love to made a cover version of?
Tom: ‘Wichita Lineman.’
I should also point out that we do have a cover of a Teenage Fanclub song on Bandcamp here:
https://havanatapes.bandcamp.com/album/babyquake-3

Mooney: ‘Whip It’ by DEVO or ‘Witicha Lineman’ by Glen Campbell.

Patrick: Me and Chris have been talking about a cover of ‘Cigarettes and Alcohol’ by Oasis but I’m not sure how keen Tom is and perhaps that’s more a matter of being flippant towards our audiences than any true love of the Gallagher canon. It’s one of the only Oasis songs that I like and, in some ways, we’re not your typical Manchester band – not much of the bravado, although we do wear big coats because it rains all the time. We sometimes play ‘Sweet Leaf’ or ‘the Boys are Back in Town’ in practise.

Q: What are your plans for the future?
Mooney: Maybe go on tour and hopefully record Palace Bingo.

Patrick: Make lots more music and have fun. We’re going to do an album and play some more gigs. We’ve been speaking to our friends (including aforementioned Tash and Fruit Tones, Wurms, Algernon Cornelius, former drummer Max G. Camp and some others) about opening a practice room that might evolve into a gig space – potentially with nice things like days for women to practise for free to address the gender imbalance in music and stuff to encourage young working class people to make music. I’m publishing a history book this year – Youth and Permissive Social Change in British Music Papers, 1967-1983. Plug.

Tom: Release this fucking album.
I’m now quite looking forward to our hotly anticipated live show at the Maracanã.

Q: Any parting words?
Chris (who, as ever, turned up a few days late to the party): Hello to you Renato and by extension Brazil! I’ve just caught up on this but the other fellas seem to have done a stellar job of answering the questions already. I’ve been over in Scandinavia for a few days to watch The Radio Dept, who can double up as my excuse and my answer to the 5 favourite albums question (They only currently have 4 albums but they’re all pretty much perfect and I’m sure their next one will be too!). I’ll also chuck in the G.L.O.S.S. – Trans Day of Revenge EP too cause I’m listening to it again now and it shreds vvv hard. Thanks so much man and RIP MES xoxox

Tom: Look us up if you’re ever in Manchester.

Patrick: Thanks Renato! Nice to speak to you. If anyone wants to fly us to Brazil to play gigs, we’re open to the idea and, if British visas are a problem after Brexit, we all have Irish passports.

Mooney: Thanks for this opportunity. All the best.
*
*
*
Thanks