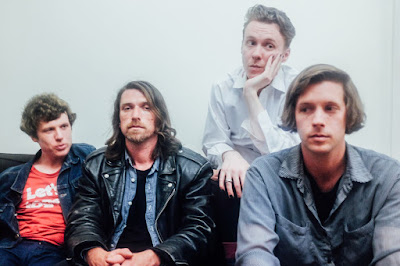 
Q. When did Secret Crush begin? Tell us about the history...
Our first show was on Halloween in 2014. Matt, Nick, and Greg were playing in other bands in Brooklyn respectively and came together with the intent on starting a band that featured two songwriters and an amalgam of genres taking inspiration from our contemporaries as well as music from the past.

Q. How do you describe Secret Crush sounds?
Guitars, effects pedals, singing. We aim to be a well oiled machine. Sometimes there's a splash of shoegaze, sometimes alternative rock. There is little to no 'jamming.' It is premeditated.

Q: Tell us about the process of recording the songs ?
In the early days we recorded singles on a mix of digital and tape. The EP was recorded at Converse Rubber tracks and we did mixing and mastering at Gravesend Recordings.

For the album, Double Life, we tracked live back at Gravesend, recorded vocals and overdubs at our own practice space, did some mixing ourselves, and took it to Time Castle Recordings for the final mix and master. I'm overall content with the 'quality' of the record considering we were on a budget. Recording is expensive and time consuming. Given these restraints we worked within the system, worked with some great people and did the simpler, but more menial tasks ourselves to cut costs.

Q. Which new bands do you recommend?
Russian Baths are doing interesting things and I enjoy the soundscape they are creating. They recently were signed by Good Eye Records - a label we were talking to about putting out our album. We ended up doing a self release. I respect their decision.

Prima is another example of a wonderful band with a distinct sound. Rose Blanshei is featured on our record and I really enjoyed working with her.

Q: Which band would you love to make a cover version of?
We have not done a cover song ever. Not that there's anything wrong with that. We've been joking about doing a cover of Johnny River's "Secret Agent Man" as a lark.

Q: What are your plans for the future?
We stopped playing shows while we were working on the album and we feel that took us off the radar. We are just getting back into the swing of playing regularly with our new drummer, Ali Yildiz. Venues in Brooklyn are constantly closing and changing so that's something we and everyone else have been navigating. We love playing live and want to keep doing it regularly to promote this album.

Q: Any parting words?
Thank you for finding us and including us on your blog. It is comforting to know we have an audience outside of our local vicinity and for that we are truly grateful.
*
*
*
Thanks