Just Had To Smile with The Finest Drops - An Interview 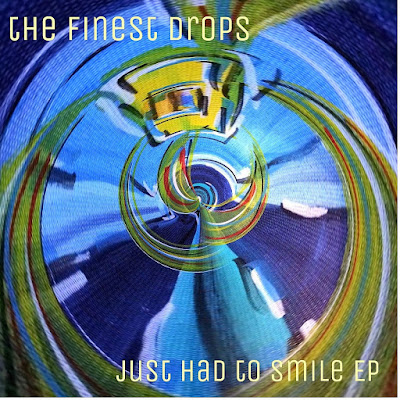 I’ve been playing Guitar in a band for over 15 years (Blackflower https://blackflower-music.bandcamp.com) playing shoegaze, melodic Indie, alt-country, & psychedelic music, which I love doing and continue to do. But I had been writing a bunch of songs that I thought didn’t suit the Blackflower sound for various reasons. I always wanted to do something with those songs and in July 2017 I asked Dave if he wanted to work on them and see how it went. We had no preconceptions of how it would go. We started off with 2 songs and a bunch of riffs and instrumentals, and spend a few sessions developing the songs. Over the next couple of months we started laying down the tracks, sharing the instruments rather than working in a fixed band set-up. I had already demoed 2 of the songs (‘just had to smile’ and ‘hefty’) so there was a basic structure there, but the other 2 have developed from a basic riff and ended up how they sound today. We posted the songs separately on Soundcloud as we finished them, and once we had the 4, released them as our first EP on Bandcamp.

Q: Who are your influences?
For song writing its Robert Pollard and Gene Clark, guitar playing its Johnny Marr and bands like Can and Neu

Q. Make a list of 5 albums of all time…
Built to Spill - Perfect from now On
Galaxie 500 – on Fire
Slowdive - Pygmalion
The Smiths - The Queen is Dead
Loop - A gilded Eternity

Q. How do you describe The Finest Drops sounds?
Lo-fi alternative melodic guitar music with some epic shoegaze!

Q: Tell us about the process of recording the songs ?
Once we have an idea on the sequence and a general sound, we get Ad to record the drums as soon as possible, usually playing along to a demo. After that we see how it develops and record as many guitar ideas as we can. The songs always surprise us with a sound or style that we were not expecting. for example 'when you go' was a jangly guitar ballad, then one day I picked up the ebow and the riffs all came out in one go, and its ended up completely different, so all the jangly guitar tracks have gone in the bin! One of our goals is to make sure we don’t aim for perfection, and fall into the trap of tweaking the tracks over and over. We like happy accidents and will leave in things to add more character or to deliberately avoid sounding too polished. We don’t want the songs to sound like they have been through the corporate music industry processes, whether that's studios or whatever. We do everything, playing, recording, mixing etc. We want it to sound like The Finest Drops and nothing else.

Q. Which new bands do you recommend?
Tchotchke, they have a great shoegazey-Pixies sound. check them out at - https://tchotchke-music.bandcamp.com/

Q: Which band would you love to made a cover version of?
I think covers are only worth doing if you bring something new to the song, so its hard to cover a great song because its already great! Some bands have a really good feel for this, like Galaxie 500 who have recorded covers better than the originals (in my opinion). I would like to cover 'the 15th' by Wire, but how would i improve it?! I have an idea to cover a Nico song but I’m keeping that a secret for now!

Q: What are your plans for the future?
We’re already planning the recording of our second EP, and have been jamming the songs to begin working on ideas. We haven’t decided on all the songs yet but have 2 we will definitely do . I expect the next EP will be more up-tempo but who knows how it will turn out! Longer term we might try and perform the songs live, but that’s not our priority at the moment.

Q: Any parting words?
We’re really happy with the levels of interest were seeing, especially as we won’t compromise in any way to please others. It’s really satisfying to know that people like what we do.
*
*
*
Thanks