The Mind´s Eye with Soñder - An Interview 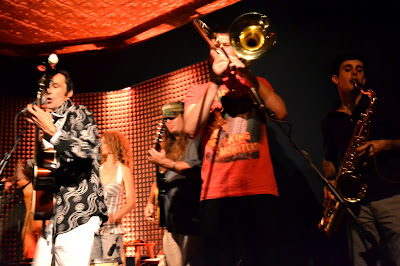 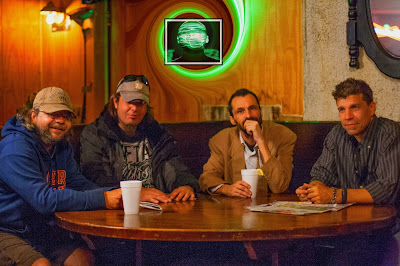 Q. When did Soñder start, tell us about the history...
Soñder was born from an idea of finally completing an ever long quest for that “album in my head” while i was stranded back in my hometown of EastEnd, Maryland on a domestik vacateSean from Hollywood, Florida in the Winter of 2013. Everything in my soul at this point in tyme told me to do this idea/project not just for me or the doubters but for my beautiful daughter, Neo. So, in tyme, she would hear my story and know to always follow your dreams no matter what this crazy mixed up world throws at ya. Soñder , meaning the RealizateSean that others have lives different than yours, is pretty much me/myself & i (aka Sean f. Schultz on legal documents) with the varied and wonderful help of my super Talented Musician Friends bringing my song ideas to light. The Core of “the band” goes beyond family- Danny Campbell on Bass & Dreams, James Patchett attempts to play Lead Geetar, Juan de Chile on Beats, Keys and Star Signs and Roger Lewis Drummer Extraordinaire. The first album Soñder- The Mind's Eye was Recorded/Produced by Pete Hanlon out of Woodstock, NY, 13 Local EastEnd musicians contributing their art and my internet Voice of Gemini Reason, Juan Francisco Guzmán Sibilla, contributing beats, keys and cover work via Santiago, Chile. The Mind’s Eye was completed in the Spring of 2014 and completely exceeded my every intentSean. Three locations were used to track 12 originals and 1 Lou Barlow cover. The 1921 Avalon Theatre, Sean Pietras's Musik Store and 100 Acre Woods Studios. I can now leave this world knowing i have achieved my childhood dream and to me- wtf else really matters. Soñder- the name, the idea and still one of the fricken hardest lessons in life to follow, at least for me?- is-> it’s not all about you SinYour Schultz- “turn to the right!”

Q: Who are your influences?
Influences vary from Joy division/New Order, Cure, Zeppelin, Bowie, Eels and Lou Barlow/Sebadoh to Prince, Rupert Holmes, Hum and Coleman Hawkins. These are the sounds that move me but i rarely find it coming out in my musik, oh how i wish but this Ride isn’t over yet.

Q. Make a list of 5 albums of all time…
I will list what i consider masterpieces in my mind. The ones that song for song either push me to strive and be true to myself or make me never ever wanna write or play again.
1. Tones on Tail- Night Music
2. Eels - Electro Shock Blues
3. Folk Implosion - One Part Lullaby
4. Third Eye Blind - Semi Charmed Life
5. Crack the Sky - Self Titled.

Q. How do you feel playing live?
Playing live is and has always been a high within itself. I truly love those moments where you feel like your looking down from above at yourself completely in the zone where the thoughts of what your playing totally disappear. I dig distorted/effected electric with a bad ass backing band at full volume but my favorite live experience has to be just me going solo acoustic. Although I kinda suck and no effects can hide the mistakes, I truly believe this is the true way to experience any artist. Stripped down to the core. You, them and the musik.

Q. How do you describe Soñder Sounds?
This is a hard question for me. I know what i've been compared to- Velvet Underground/Lou Reed, Bowie, Floyd, Roxy Music and the latest one was The Cars... Lmao! All those references i take as a compliment but i don't get it but i'll take it, i love them all. But i will try to describe “the Sound of Soñder” Sometymes mellow guitars meshed with harmonik overtones and lyrikal rhymes vs straight forward distorted torment of the ugly but simple bitter truth? It's either that or- Pussy pop love songs about drugs and destructSean.


Q: Tell us about the process of recording the album?
The Mind's Eye came together so easily it was amazing. Pete captured everything raw and true in less than two weeks tyme. These were songs i have played in my head for years, most came from 1998/99 demos although complete mierda, i heard the possibilities forever driving myself mad on repeat in my head. We started with a drum loop click track, recorded two rhythm guitar tracks by me and added vox. Then i would call on certain musicians which i felt would complete the tune and gave them pretty much free range. From piano and horns to backing vox, lead guitars and even a didgeridoo. I am forever grateful to everyone who was involved in the Mind’s Eye Sessions, especially Ms. Leah Kenninglark. The new album i am doing "The Booby Hatch aka Slow Songs for the Mentally ill" is being recorded by Roger Lewis who owns Monkey Boy Studios in EastEnd, Maryland. I recorded my first band album Narkissos- Something in the Water in 1997? and mastered my first solo 4trek album "Free Tyme" in 99ish with Roger. Although these new songs will still be personal with directSean, I have no set way they have to be. So, basically i am super happy to be able to experiment and let the songs dictate what they need. At this tyme i have almost completed 5 of the tunes which i’ve posted those “works in progress” to Soñder’s Soundcloud site. Soundcloud.com/SonderSounds.

Q. Which new bands do you recommended?
Nothing out of Philly. Their last year’s first album release "Guilty of Everything" is fricken beyond sick and i am impatiently awaiting for this new album by them to see/hear how the F#! they are gonna follow that up. Also, from Philly- Beach Slang’s 'The Things We Do To Find People Who Feel Like Us' is a rocker and they are about to prove this on their first European Tour (don’t forget my t-shirt!!) A new find for me that i truly love is Postcard for Jeff’s album “Modern Language.” It’s very well done and has lately been my valium.

Q: Which bands would you love to make a cover version of?
I have always wanted to do Ceremony by Joy Division/New Order but after Chromatics purrfect version a lil while back that messed that idea up completely. I covered my favorite artist Lou Barlow's Brand New Love on the Mind's Eye and plan on doing Truly Great Thing by him as well on this album. But, i would love to attempt Buzzcocks - Why Can't i Touch it, that is my goal one day. And i must add- we just did Echo and Bunnymen’s tune “Rescue” for this beyond cool Blog Hears latest Compilation- “Gods will be Gods”!!! I think it came out quite well, my producer calls it- 60’s opium den musik, lol… i call it a complete mind f$k homage to one of the great bands of my childhood.

Q: What are your plans for the future?
The immediate goal is to nail “The Booby Hatch aka Slow Songs for the Mentally ill” album sometime by the end of this century and hopefully it will travel around the World and be appreciated by various music lovers alike and if all goes to plan- Soñder will sell at least 1 copy and make a fricken dollar and then finally I will be able to say i have a real job...My long term goal is to live in Spain and raise my Neo in a beautiful culture where people work to live not live to work and leave this crazy world knowing “whoever dies with the most stories = wins!” and i have some good ones. Spain is my Cielo.