Silhouettes with The Harrow - An Interview 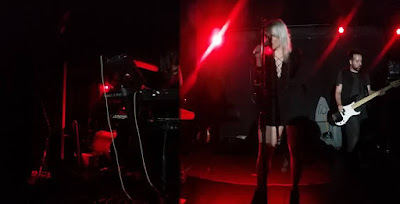 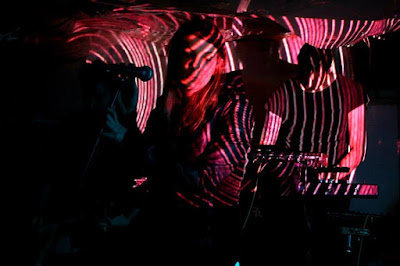 Q. When did The Harrow start? Tell us about the history...
Frank: It's a long tale, with a few misfires and false starts, but mostly it came together with the passing of my grandmother. I had recently given up on music, but felt her passing was the catalyst for me to give it one last go, with the right people involved and the right ideas on the table from the start. It was almost three years ago to the day – I picked up a few drum machines and started making demos, and it gathered steam rather quickly. We solidified our lineup in a matter of weeks, and everything just clicked. We lined up a handful of releases (including immediate interest from our amazing label, aufnahme+wiedergabe) on the strength of two demos, and for a change, it just seemed like all was right with the universe.

Vanessa: I hate doing these because I can never pick, so I’m going to list the five albums I’ve been listening to the most lately: Public Memory – Wuthering Drum (out in 2016), Phase Fatale – Grain, Pusha T – Darkest Before Dawn: The Prelude, Rabit –Communion, Helena Hauff – Discreet Desires
Frank: This changes constantly, so I'll go with current favorites as well: Pauline Murray & the Invisible Girls- Pauline Murray & the Invisible Girls, Manic Street Preachers – The Holy Bible, Felt – The Splendour of Fear, Not Drowning, Waving – The Little Desert, Pieter Nooten & Michael Brook – Sleeps With the Fishes

Q. How do you feel playing live?
Vanessa: At first it was terrifying, but as I’ve gotten more confident, I am really enjoying it a lot more.

Barrett: It's been a fun transition from drumming (I was a drummer in prior bands) to synth. I like to move around and interact with the crowd a bit more.Greg: I really enjoy the electricity in the air and direct audience feedback, as well as the simple physical pleasure of playing music live.

Frank: I used to thrive on stage, but these days, I haven't been enjoying it as much. While it's great to make that connection, there's usually a lot of variables and anxiety involved, and I don't find it to be a worthwhile experience, 99% of the time. I'm much more inclined to be creative for creation's sake.

Q. How do you describe The Harrow sounds?
Barrett: Four friends doing what they feel at any given time.


Q: Tell us about the process of recording the songs?
Barrett: It varies. We usually start with beats and then build around them, but sometimes we get a guitar or synth line first. We each supply our piece of the puzzle and become motivated by each other’s contribution.

Frank: Our producer, Xavier Paradis (from Automelodi), has also been a key element, often bringing the songs to life in the mix.

Barrett: Public Memory, with whom Vanessa will be performing live, made a great record.

Vanessa: I second Public Memory (really excited to be playing live with him), Partisan, a place both wonderful and strange. I also have another project called Synesect that will be releasing an album soon.

Q: Which band would you love to make a cover version of?
Barrett: We actually do plan on recording a covers EP soon, so we want to keep it a surprise.

Q: What are your plans for the future?
Barrett: See above. We want to do this as an exercise in rearrangement, as well as something to just have fun with, with very little pressure. Part of the joy of being in this band is working at our leisure and under our own rules. The fact that people have been receptive to it is the icing.