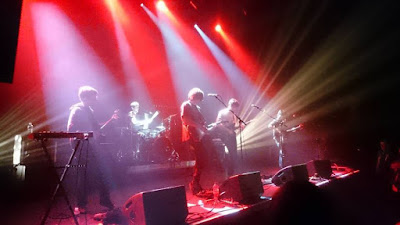 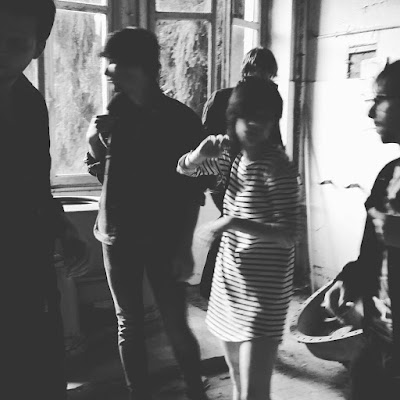 Q. When did The Great Artiste start? Tell us about the history...
A. The Great Artiste is born when Benoit and I (Etienne) first met, a few years ago. That night, we talked about music for hours. We loved the same bands, from Pink Floyd to Eels, and we were both playing guitar. Soon, we started to write and record songs. It wasn’t very good, but the urge of hearing something new and loud in France was already there. We were angry against the musical scene of our country, which is principally a middle of the road music. Our generation’s influences are mostly British and American. We are now five musicians, with Aurélie on the bass guitar, Hadrien on the additional guitar and synth, and Clément on the drums.

Q. Who are your influences?
A. The most obvious are Ride, Adorable, The Jesus & Mary Chain, The Warlocks and Spiritualized. These bands have written some of the better sensitive songs I know, and managed to sound heavy at the same time. The less obvious are R.E.M., The Cure and The Beatles, for the really powerful melodies. And of course, the father of all these bands: The Velvet Underground.

Q. Make a list of 5 albums of all time…
A. That’s a tricky one! Well, I will start with the 1989 album of The Stone Roses. It’s number one because it’s perfect: all songs are pure pop songs, but there’s nothing naïve about it, and it’s always fresh. My personal progressive rock album is 666, by Aphrodite's Child. I love Vangelis vision of psychedelic music; it’s really deep. Of course, I must name Methodrone, by The Brian Jonestown Massacre, because it’s a brilliant shoegazing album. Anton Newcombe has seized the essence of it. It’s simply beautiful. At this point, it’s impossible for me not to talk about Psychocandy, by The Jesus & Mary Chain. This record was fundamental in my desire to play music, and The Great Artiste wouldn’t exist otherwise. This album is really insane: the amount of saturation, mixed with perfect pop melodies inspired by the Beach Boys gives something truly unique. My vision of Music has never been the same since. And, well, the best of all: The Velvet Underground & Nico.

Q. How do you feel playing live?
A. That’s what we live for! We love to compose music, and it’s very exciting to work on new songs, but the thrill to be on stage, to share our music live is the accomplishment of all the work we do beside. We never let people indifferent at our gigs, and that’s very rewarding!

Q. How do you describe The Great Artiste sounds?
A. When we choose the band’s name, we came across this plane, The Great Artiste, which was part of the bombing missions of Hiroshima and Nagasaki. The sound analogy of the B-29 propellers and the massive sound effects produced by the bombings was obvious. Our bombs would be sonic.

Q. Tell us about the process of recording the songs?
A. As I was saying earlier: it’s always exciting to work on new material. Because, when we’re in the process of writing a song, we don’t know what it has to tell us in the first place. It comes from nothing, and with some work and a bit of magic; it becomes great. The process of recording went more precise with the time. For our first record, we came with the songs in our heads, and played them instrument-by-instrument. From now on, we’re doing a considerable work upstream: we write down all instruments on a partition, and then record it as a demo, before we can record it properly. This way, we leave very few things to chance. But sometimes, chance plays its part as well! I remember when we were recording Heroin Love: I was originally doing a solo on this one, but our drummer forgot about it, and the first version recorded was too short for the solo. We give up on it, and it became the sweet pop Krautrock thing we know.

Q. Which new bands do you recommend?
A. Lemonday! A band from Russia, lead by two crazy girls. It’s very garage, with a guitar, a keyboard, and minimalist drums. I love their old lives; you can find them on YouTube. I also recommend a band from Santiago called Maff, They have released an EP, Echoes and Dust, and it’s incredibly cool.

Q. Which band would you love to make a cover version of?
A. We’re actually working on our version of Mercy Seat by Ultra Vivid Scene. I also want to make a cover of Dear Prudence by The Beatles, because there are great shoegazing elements in that song: the repetitive melody, the bass part... And I secretly dream to do a cover of You’re the One that I Want, from the Grease score.

Q: What are your plans for the future?
A. We plan to tour for a while, and we’re currently working on an album. I can’t say yet how it will be released, maybe one song at a time. We have a bunch of projects for 2016: the first in line is to play a new song with two drums, two bass, and four guitars. It’s going to be massive!

Q: Any parting words?
A. Thanks a lot The Blog That Celebrate Itself! Keep spreading the good word around the world!
*
*
*
Thanks