Pale Blue Skies with Sunshine & The Rain - An Interview 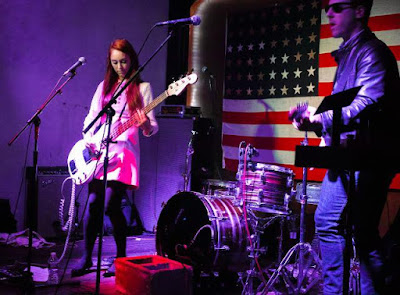 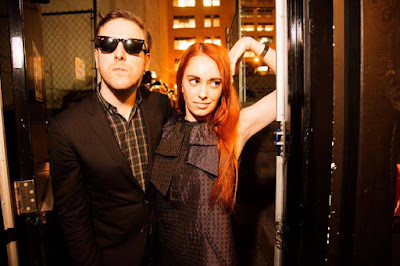 Q. When did Sunshine & the Rain start? Tell us about the history...
We both fell instantly in love with each other one fateful Spring evening in Chicago, May 2008. Shortly afterwards we became boyfriend and girlfriend and on new year's eve of 2010, we wrote our first song together. When Ash wasn't away at college down in Nashville, she would live with me in NJ. Those times were spent listening to our favorite records. The Saturday before Hurricane Sandy touched down in the Garden State, we became engaged to each other. In July of 2013, we exchanged vows in front of our family and closest friends at our once beloved music venue in Hoboken, NJ(Maxwells, R.I.P.). We all danced the night away while WFMU DJ, Todd-O-Phonic Todd provided our wedding soundtrack on the wheels of steel. Ever since then we've clearly been up to no good.

Q. Make a list of 5 albums of all time… A: Although old vinyl 45's receive heavy rotation at our apartment, we do enjoy listening to full length lp's every now and again. We decided since there's two us, we'd double the amount and give you ten. There are too many to list however, here's a partial listing in no particular order, based on the records that are currently next to our turntable. 1. Black Flag- Damaged 2. The Pretty Things - S.F. Sorrow 3. JAMC - Psychocandy 4. Ramones - s/t 5. Velvet Underground- Loaded 6. Bob Dylan- Blood on the Tracks 7. 13th Floor Elevators- Psychedelic Sounds of... 8. Nation of Ulysses- 13 Point Program to Destroy America 9. Stooges- Funhouse 10. Spacemen 3- The Perfect Prescription

Q. How do you feel playing live?
A: Social anxiety anyone? Considering the fact that we are both deeply introverted individuals, it's painfully challenging every time! Hahaha! We're not particularly fond of everything leading up to our performances; however, when it's time to hit it, for some strange miraculous reason, we're transported into an entirely different dimension. We put 500 plus genuine and sincere percent into every live S&tR performance. They're truly one night stands. No two are ever duplicated. For that brief moment, everything comes together and we achieve complete enlightenment. It's incredibly hard to translate that feeling we experience into words but we can assure you that the moments are insanely spiritual.


Q. How do you describe Sunshine & the Rain sounds?
A: Our most commonly received comparison is to JAMC which of course we're honored to hear because we LOVE them (especially that first album), but in terms of songwriting I would say we sound more similar to Ramones or early Decendents(their debut 45rpm record: "Ride the Wild" b/w "Hectic World"), the Troggs and Black Flag, that kind of stuff. We have that early melodic punk energy. And of course we have female-fronted slap-back tape echo vocals, so that gives a different twist altogether.

Q: Tell us about the process of recording the songs ?
A: S&tR records live and over dubs the vocals on a separate track. We try to get everything down in one take. Sometimes we're successful the first time around...sometimes we play the song 25 times until we capture the right feel. Even though we play to a drum machine while tracking, we're still taking great efforts to capture something live and raw based on the actual live moment. You can't bullshit a bullshit artist, right? We're our worst, most harshest critics and won't rest(or stop for burgers at the greatest burger joint, White Mana in Jersey City) until we obtain some sort of happy medium.

Q. Which new bands do you recommend?
A: Ex Hex, Alvvays, Courtney Barnett

Q: Which band would you love to made a cover version of?
A: Eddie and the Cruisers

Q: What are your plans for the future?
A: We're currently in process of finishing up some new song ideas and plan to record them when we can iron out the logistics properly. We've wanted to head out to Chicago and record our compositions with Steve Albini at Electrical Audio since we started S&tR. Hopefully that dream will come to fruition in 2016. You can expect an ep and a single before 2017.

Q: Any parting words?
A: Support you local mom and pop/ brick and mortar record shop. Don't just go there on "Record Store Day"...That's a douche move! Everyone is different, learn to develop more patience and respect people's differences. We're all human. Let's put an end to all of this gun violence. It's absolutely ridiculous! Parents should do the right thing and teach your children well. Everything begins at home. Buy our records and spread the S&tR word. We're grateful for all of our fans love and support. We're so fortunate to have you on our side. Thank you for taking the time out of your day to read about us.

Much love and joy to you all!