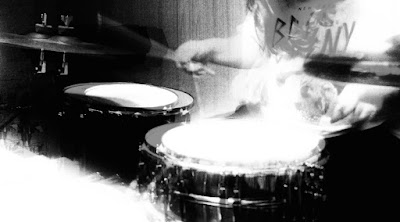 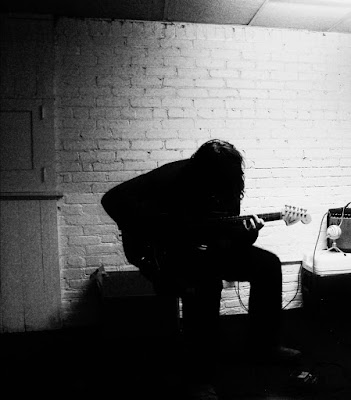 Q. When did Spectre Eyes start? Tell us about the history...
We started as "Bounce House" in 2014 working with mostly field recordings, and ambient music. We experimented with sounds more, and decided we should start to head into a different direction. We started Spectre Eyes in early 2015 with a much more experimental and live instrument oriented sound. Both of us have been playing music for years.

Q: Who are your influences?
Obvious influences are bands such as Godspeed You! Black Emperor and Set Fire To Flames, but we also take a lot of influence from blues artists like Junior Kimbrough, R. L. Burnside, or John Lee Hooker or psychedelic groups like Baby Grandmothers or also Pärson Sound. As far as vocals go, we're heavily inspired by Have a Nice Life, and Giles Corey.

Q. How do you feel playing live?
We haven't played in a live setting yet but we definitely get into the music during recording sessions and hope to play live within the near future. Playing on stage is definitely one of our biggest goals. Even if we only play one live show, it'll be our greatest achievement.


Q: Tell us about the process of recording the songs?
Improvisation is a big part of our music. Most of our recordings are improvised pieces, or stem from an improvised piece and recorded after being developed on. Many recordings are from sessions spent in long periods of isolation or even sleep deprivation. We're also heavily influenced by life experiences, and each release is an all encompassing account of the world around us at the time of the recording, letting emotions, worldly crises and our personal experience play the biggest part in the final outcome, regardless of it being negative or positive. We put everything we have into our work.

Q. Which new bands do you recommended?
There are many great new artists on the label we're on:
https://barbedwiregardens.bandcamp.com/
Also some other new bandcamp artists we love:
https://emotionalskyscapes.bandcamp.com/
https://epiglottis.bandcamp.com/

Q: Which band would you love to made a cover version of?
We have plans for some covers in the future. The idea would be to do a cover of something with very little similarities to our music, giving us room to twist or distort the sound and message.

Surprisingly, we thought about doing a cover of Third Eye Blind's "Motorcycle Drive By", for example.

Q: What are your plans for the future?
We're currently in the process of recording our second full length album, which will be another massive project, and will be out in 2016. We also plan on working towards playing live at some point.

Q: Any parting words?
Thank you for taking interest in our music, it means a ton to us. Anyone listening to our music and being interested by it is the most important thing we can really ask for.
*
*
*
Thanks