Tether with Blushing - An Interview 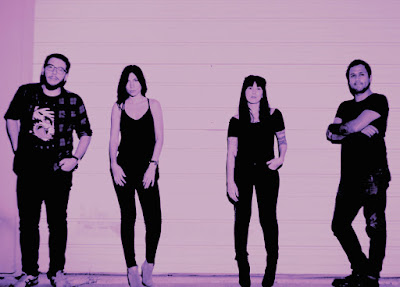 Q. When did Blushing start? Tell us about the history...
I had a collection of rough songs I wrote and wanted to keep progressing with so I approached Christina around the summer of 2015. We had been friends for years and I knew she had a beautiful voice and was musically inclined. We would meet up once a week in alternating living rooms and experiment with the songs and instrumentation until Christina decided to pick up bass and teach herself to play (like a badass). We reached a point where we had some really solid songs and recruited Noe, Christina’s husband on drums. We made great progress but the songs really needed a lead element so Noe moved to lead guitar and my husband Jake joined and took over drum duties. Both Noe and Jake have an extensive musical history playing in a number accomplished bands. Once we all fell into place our accumulated musical experience and influences converged and completely shaped the current sound.

Q: Who are your influences?
We tend to gravitate to the sound of the great female fronted bands of the 90’s like Lush, Cocteau Twins, The Sundays and Belly

Q. Make a list of 5 albums of all time…
This is hard to answer as a band so I (Michelle) will take this one solo:
Heaven or Las Vegas - Cocteau Twins
Ocean Rain - Echo and the Bunneymen
Gish - Smashing Pumpkins
The Sundays - Reading Writing & Arithmetic
Belle and Sebastian - The Life Pursuit

Q. How do you feel playing live?
Not sure yet! We play our first show on Sunday (Jan15th). But we are excited and ready to share. When we started the project we didn’t have much of a plan to play live, we really just wanted to focus on crafting the songs and recording an EP. Now that the EP is being released though we are ready to give the songs a life outside of our practice studio.

Q. How do you describe Blushing’s sounds?
A journey through sweet and grit that will take you longer than 3 minutes to get through.


Q: Tell us about the process of recording the songs?
It was a damn pleasure. We went into the studio over the Labor Day holiday weekend last September. The songs were already well formed but once we were in the studio they received the benefit of having 5 musically talented, creative people all coming together with excellent ideas and trying them all out. That fifth person was Phillip Odom, owner of Bad Wolf Recordings who engineered, mixed and mastered the EP. He played a huge part in the lovely sound we were able to achieve. We grew even closer as friends and bandmates (and with resident studio dog Kingsley!). It’s a magical feeling when you try something new, listen to the playback and the whole room just collectively falls in love with it. We also ate a lot of food. So much eating.

Q. Which new bands do you recommend?
Honeyrude is a fellow Austin band that we are digging.

Q: Which band would you love to made a cover version of?
Pylon - Crazy (R.E.M. covered this song on Dead Letter Office and did a great job. It just has a great energy and infectious melody.)

Q: What are your plans for the future?
We plan to keep writing new music and playing live until we have the ability to go back into the studio and record more material.