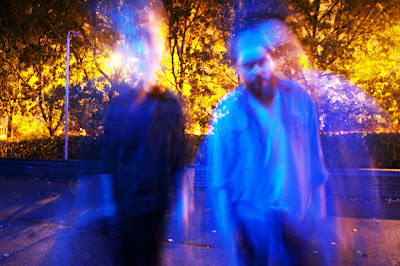 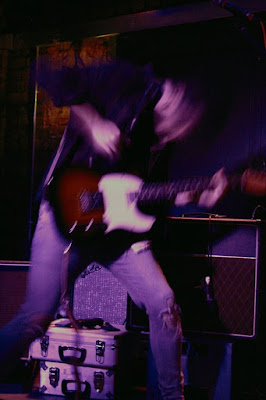 Q. When did Pool Art start? Tell us about the history...
Scott: Last year, we'd been playing some more electronic influenced stuff and decided to go back to more stripped back raw live instrumentation. I'd neglected my guitar for too long, but I'm not a fan of traditional guitar sounds really so I like to run it through a lot of effects.

Q: Who are your influences?
Scott: It's a lot different these days where I find inspiration to write. I used to love records like 'Tin Cans With Strings To You' by Far but nowadays I'm probably more influenced by movies I see, articles I read and podcasts I listen to. I love the recent 'Alice Isn't Dead' podcast, made by the people who do 'Welcome To Night Vale'. Both of those podcasts have such a fascinatingly strange aura, created just with subtle music, a voice and some sound design. The soundtrack to Alice was incredible too, each episode ended with an original track.

Q. Make a list of 5 albums of all time…
Scott: Favourite and best are probably slightly different for me. It changes a lot, sometimes I grow to hate albums that I later learn to love again. I'm just gonna do from 2016 as it's ever changing:
Julianna Barwick - Will
Kaitlyn Aurelia Smith - EARS
A Place To Bury Strangers - Transfixiation (might have been 2015 actually)
B Boys - No Worry No Mind
Mitski - Puberty 2

Q. How do you feel playing live?
Scott: I've been doing it with various bands for years but I still feel nervous, I doubt it will ever go and it probably fuels me more anyway. The strongest feeling though is pure unfiltered excitement, such a rush, it's addictive. I'd love to play longer sets in the future as its all over in a flash with 30 minute sets.


Q. How do you describe Pool Art sounds?
Scott: Lot's of people have been confused about what we're doing, but we don't mind, it's probably because we've never made a clear plan for how we want to sound. I listen to rain or ambient music in bed sometimes, that's something I've tried to create with guitar albiet in more volatile ways. I'm very interested in experimental noise making pedals, anything that can self oscillate or shriek without interaction, then it's about trying to retain some sort of control over it because I'm a big fan of strong melody too.

Q: Tell us about the process of recording the songs ?
We're starting to get more interested in the spaces we record as this can have a huge influence over the songs, like the new EP we're doing partly in a warehouse and partly in an art gallery. We like to make decisions before recording, only to throw it out the window when things change in the recording environment. We look to create interest and intrigue within minimalist structures and that can involve capturing sounds from different places and introducing them subtly in a mix. For instance our first single 'Don't Feed Me To Them' starts with an insanely long time-stretch of a fire alarm I recorded on my phone. We're also quite selective about what we release, some songs that we've worked on a lot don't make the cut so no-one hears them.

Q. Which new bands do you recommend?
We've seen some great ones in Manchester recently, False Advertising and MUMS are excellent noisy live bands, then Age of Glass do an awesome live dub-rave thing, we need to catch them again soon, it's been too long.

Q: Which band would you love to made a cover version of?
Animal Collective or Panda Bear, that'd be challenging.

Q: What are your plans for the future?
We're making an EP in the first quarter of 2017, then going to do loads of shows to spread the word. Hopefully we'll end up at some festivals too. It'd be great to play Kendal Calling, Sounds From the Other City, A Carefully Planned Festival or something like that.

Q: Any parting words?
Yeh, people are saying they can't understand the lyrics in our songs. Yes we do want to use that much reverb thank you very much, you're just not listening hard enough.

Our new EP will be due out later this year supported by some live shows.
*
*
*
Thanks