Strange Fortune with ex-mothers - An Interview 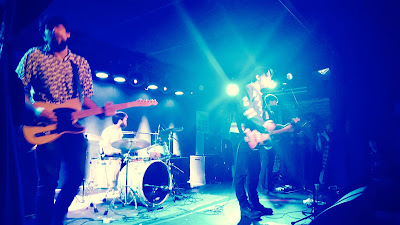 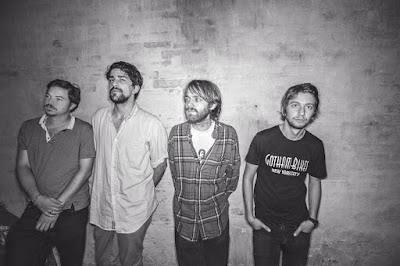 Q. When did ex-mothers start? tell us about the history
We've been close friends since high school! Dylan, Alex and Burke all went to school together and had a band together called The Chocolate Jesus. We had a Mutantes-inspired song called "Vendo Bananas" and whenever we would play it Ben would join us on stage and shake a Banana-shaped Maraca. I’m pretty sure at one point someone came up to us and asked “What’s with the guy who’s always shaking a banana?”

We all grew up in the city cavorting around and listening to old psychedelic-garage groups. we were young and silly and felt some naive ownership of our city. When I (Burke) got back from music school, I was wildly depressed that it wasn’t my city any more, the nerve! I moved in with Ben three months out of college and he turned me into an 80’s punk. That “our band could be your life” ethos just seemed more attainable than becoming spn’s band to watch at the sxsw tent. Besides, I was never really that rebellious as a teen and being broke in your early 20’s with nothing much to do is a wonderful time to kick some shit.

When we started the band Alex was in another band but once that project broke up we made it known that we wanted him in. Ben invited Alex to hang out at one of their practices. It was a pretty calculated move. We wanted Alex to join the band and we’re pretty sure if he started coming to practices just to hang out that pretty soon he would start playing guitar.

Q. Who are your influences?*
Women, Sonic Youth, Glenn Branca, Gang of Four, Eddy Current Suppression Ring, Mission Of Burma, Fugazi, The Minutemen, and Swell Maps to name a few, a lot of our influences are other local New York bands like Prima, Sic Tic, and The Brooklyn What

Q. How do you feel playing live*
That's a hard question to answer! We feel a combination of excitement and wanting to puke out of nervousness. Usually, that's before we go on stage then we kind of enter this black hole where we don't even think about anything besides the music. We try to have a very militaristic, Ramones-style set with no talking cause it’s so silly making small talk on stage.

We weren’t good live for about 3 years. Now we’re good but we still keep the same attitude.

Q. How do you describe ex-mothers sounds
The sound of masculinity deflating in downtown manhattan. Or put generically and vaguely, New York post-punk.

An earnest rock and roll songwriter who can’t stop touching their instrument.

Q. Tell us about the process of recording the songs
So,we usually just get in a room and somebody just starts playing an idea they have. Then we wind up playing it over and over until it somewhat resembles a song at which point we start playing it live. It's at our shows that our ideas really come to take shape.

We often break apart songs and add different bits together or throw out things completely if we find we don't like it. It's pointless to stick to an idea that just doesn't sound good or interesting.

The biggest guiding light during rehearsal is that when we’re writing together, we’re really just standing in a room together making noise until a song emerges. If one person doesn’t like the direction things are going, it’s up to them to change what they’re doing to push the sound in a direction they like. We try to never tell each other what to play. Once a song begins to take shape we’ll start to make suggestions to each other and craft things a bit more, but most of the writing is communicated through music instead of talking.

We write exactly like U2 apparently. But we track everything live in studio because we really only know how to play these songs together


Q. Which new bands do you recommend?
Video Daughters and Toyzanne are some awesome NYC bands that we love,

Priests, Flasher, and Big Hush are cool bands from D.C.

We also like Protomartyr, Preoccupations, Chastity Belt, and Parquet Courts.

Q. Which brazilian post-punk bands influence you?
Vzyadoq Moe, Muzak, Mercenarias, Black Future, Divergencia Socialista, there’s so many it’s too difficult to list them all! But Mercenarias is my favorite Brazilian band of all time.

Here’s a small playlist of Alex's favorite Brazilian Post-Punk songs that we made just for TBTCI: https://www.youtube.com/playlist?list=PLIGI8Wu2kgapheHxoQaorKDEZRiZw6O6E.

Q. What are your plans for the future?
We're writing new songs and trying to incorporate a lot more groove/improve and at the same time, strange rhythms that you can't dance to. We like the contradictions of having our songs be really accessible and then suddenly shift into something that is a bit harder to sit through.

Also, we hope to turn our live shows into a more experimental multi-media event. Not all of them necessarily but maybe every other month work with different artists and change the format so that it doesn't always seem like a standard rock show.

Part of the idea is that if you’re a rock band person you’ll go to a few shows, but you probably don’t see very much visual art, and if you’re a visual art person then you probably spend time in galleries but don’t see a lot of live music. So we want to try to incorporate different things like food and art into our shows so that we can make events with and for all kinds of people.

Q. Any parting words?
Fuck austerity! Sending much love and solidarity to all my Brazilian brothers and sisters who are fighting in the name of Democracy. (Alex)

Modern life is rubbish. Go to live shows. Be a silly goose. Have an awkward conversation. And don’t document it. Technology is good in small doses but just like whiskey, it’ll fuck you over in the end. (burke)

Fuck Trump! Thanks for the interview! (Dylan)
*
*
*
Thanks