Sonic Rabbit Hole with Reptilians From Andromeda - An Interview 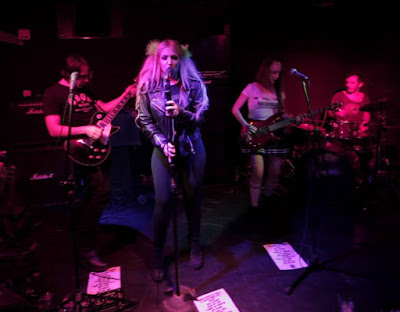 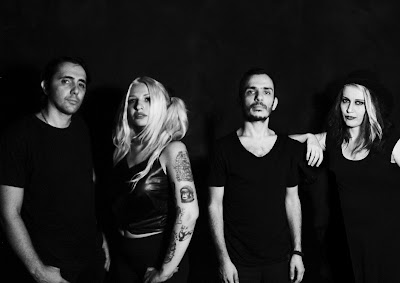 Q. When did Reptilians from Andromeda start? Tell us about the history...
Tolga: We started as "Solar Chaos" an experimental/instrumental band at 2013. We have released an album from Canadian Noise record label "Fuck Yr Body Up". After that Aybike wrote some lyrics and we recorded new songs on our vacation trips, and we decided to give a new name "Reptilians From Andromeda" to this new project. But in the beginning here was just us, Aybike and me, and you know we are doin diy home recordings. We have just married its our family fun in that time. We got good feedbacks from Some US labels after we upload our songs to soundcloud. We released 4 Ep's and an album in just three months. Everything was so fast. I have just disband my 20 years long punk rock band "Rashit" so ı was bored with music bussiness and i don't want to be a part of a band again,
it's quiet good for me to just recording some stuff with my love. But anyway there are so much Interest around us to see Reptilians From Andromeda on the stage. You know you can't resist something like that...

Aybike: So we decided to find a drummer and bass player to play live as a band, Taylan was in our minds. Tolga knew him and we loved his old projects as a drummer, we wanted to ask him but he is faster than us, he sent us a message "I loved the songs, I want to play drums" it was amazing and its a sign so we believe he's the right person! We found Merve from facebook, we didnt know her before, but she has same taste of music with us. There arent so many people love alternative music genres in Turkey. We decided she's ok even she lives in an other city where Joe Strummer was born. We Thought that she is a serial killer or a fake facebook id of a male??? till we met her.Suprisingly she has a good personality, so damn good so sometimes we are still suspicious about her!

Taylan: My only influences are not especially persons but the life itself also. You gather things and you put it in your backpack as 'influence'.Events, objects and yes some persons. To answer i can say Steve Albini (producer, guitar player, writer) is my favourite personnage at the music scene.

Q. How do you feel playing live?
Aybike: I feel like a reptilian. A powerfull predator with cold blood. I was born to be on stage.

Taylan: I feel good when i play live. It's really fun to play when you play rock'n'roll music to an audience...

Merve: When i’m playing live, i feel like time has stopped; i'm having this feeling every time.. The music makes me feel alive! That’s my partner in crime!

Q. How do you describe Reptilians from Andromedasounds?
Aybike: Basicaly we are a lofi garage band but sometimes our sound changes with our mood swings!

Taylan: Reptilians from Andromedas sound is like 90s garage-punk bands sounds. But between songs there are different and unique sounds and grooves.


Q: Tell us about the process of recording the songs ?
Tolga: Simply everyting begins with Aybike's lyrics and we sometimes make jam at home together, so we record a basic demo, and send the other bandmates. We make rehearsal at a simple local studio and at the end record drum tracks, and take all  the recordings to our home studio where we record all guitars, bass, vocals and additional noises etc. We use reel to reel & 4 track tape machine recorders, at the end we use computer to mixed all the stuff. We used to make our masterings but we stopped doin that so we have met with Fran Ascroft who is the frontman of legendary 70's band The Monos band from Uk. now he is making our masterings and give our sound a gently touch and somehow they sound more vintage, he adds some magic i guess.

Taylan: Lately i am listening to Goat, Dan Sartain, Temples...

Merve: Career Suicide, The Futurians, Human Tetris; i can recommend these bands for music junkies.

Q: Which band would you love to made a cover version of?
Aybike: Actually we had covered ''Rebel rebel'' and ''Cherry Bomb''for our shows. I loved these songs when i was a child and they are fits my voice.  But without my timbre i choose ''Killing Joke''

Tolga: "Suicide" would be nice!

Taylan: I would like to make a cover version of "Kraftwerk", "Residents" or a "Devo"'s song. Maybe one day....

Merve: I’d like to make a cover version of Bratmobile, Frumpies, Japan or Blancmange’s song i guess

Q: What are your plans for the future?
Aybike: We have just shot a new video for "Blood Planet" song, We are going to release it soon,

Tolga: There're also upcoming shows in Istanbul. And we have just finished our new demo recordings. Titles and ideas are ready now, just We are gonna make a serious recording session for them to release a new album soon.

Q: Any parting words?
Aybike: Thanks for this great questions, it's been a good interview, cheers!
*
*
*
Thanks