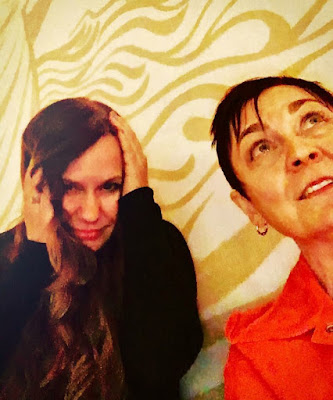 
Track 1: "Lamb on the Moon"
Karen Zanes: This song originated with our former drummer, Erik Jackson. In a way it's a typical example of our writing style. Often Dez and Erik would meet up and start writing a new song and come up with a working title. I would later add to that. In this case I took the title of the song and built verses and a chorus to that theme --"take a trip with me..." It felt very galactic. Meanwhile, Dez already had her own repeating verse "there's something going on.." So we often write in that way; each pursuing their own meaning/bliss though lyrics and instrumentation but in a parallel way. Somehow it all comes together!

My favorite part of the song is Kris Thompson's synth melody, created with a Kaosillator pad! By the time we got to record this song we had a new drummer, Andrew Abrahamson who was able to replicate some of the "legacy" beats while adding new rhythms on top of that.

Dez DeCarlo: Lamb on the moon, a hallucinogenic, “take a trip to outer space...” Who is the mind, where is the body? Thoughts swimming, losing control, letting go, a soft drugged dream state.

Heavy thunder guitars roar like a lion. They don’t need eyes to see you. Let yourself go, fall into space gently.

Crash into this thick smokey tornado shaped sound wave. “Take a trip, take a trip with me.”

Track 2: "Dentscape"
KZ: Dentscape is probably the most straight forward track on the album. Again, started by Dez and Erik. I am the only one singing on this --although Dez wrote the first verse. I finished the lyrics with a second verse and a chorus. Andrew, our current drummer, again took over the legacy beats and added more electronic percussion on top of that. Thor Maillet ( of Petridisch, who joins us from time to time) recorded a nice droney synth part that sustains throughout the song.

Track 3: "Black Cat Bone"
KZ: This was one of the first songs (along with Nebula) with beats and rhythms developed exclusively by Andrew A. The song originated from an initial session between him and Dez and Thor. Kris added a very defining Kaosillator part consisting of short, sustaining bursts that repeat throughout the song.

I think I came up with the title. The song has a very dark magic feel to it. Dez wrote the lyrics for this song - I believe they have very personal meaning for her. I sing the chorus 'Crucify her, she put out my fire.'

It's one of my favorite songs to play, guitar-wise. There's a nice interplay between Dez's and my guitar parts.

DD: based on a true story of a horrific accident i was in. Punk teenager, trouble doll, drugs, sex, being reckless, speed, fast car zoom. A truck hit us. I was thrown out of the car and knocked unconscious. The moment when light meets death then you are given another chance, Black Cat. It's also about the dark parts of the Self, loving deeply, attachment, separation. Grizzly vintage tube amp with scratchy secret guitar techniques, beautiful feedback and a mix of delay waving her arms, to the groove of Black Cat.

Track 4: "Nebula"
KZ: Probably my favorite song on the album. I feel it's the strongest, too and the most defining of our collective Violet Nox hive mind. It's pretty wild and untamed. It was the newest and at the time, not a fully congealed song, when we came to record it. It was the last song of the first day of tracking with Gary War at his home in Gloucester. We were all tired and from that there's a nice looseness to it --which I feel captures the original intent of our "noise project."

Dez's lyrics are brilliant -- the opening "Point my pistol to the sun. Hey I'm Jesus and I'm number one!" Well that grabs you right there. She gave me a spoken word part, which is fairly buried in the mix and repeats twice, the second time played backwards.

At the beginning of the song I loop a few notes with my guitar. That continues to weave through till the end. The rest is freestyle melody played over that and improvised against Dez's 'dirtier' guitar riffs and sonic explosions.

DD: Inspired by a broken relationship, glass cutting skin, through death there is rebirth. Nebula is about setting your soul free, burning the past, surrounding yourself with light, letting go of what no longer serves you. Nebula is about nothing except everything you feel, taking risks, loving self. She is a wild wind, never tame. You can never catch the fox, her soul deeply on fire, never repeating the past, blind to the future, i want to take this chance❤️✨

Track 5: "Snow King"
KZ: Ah, Snow King. The first song we officially multi-tracked with the original line-up: Dez, Erik, me and a fairly new-to-the-project Kris.
Just like 'Lamb' it was started by Dez and Erik with Dez and I then following our own separate trajectories lyrically and melodically. I wrote the lyrics "you can run, you can run so fast..." around this weird title, Snow King.

I was still new to looping at the time... Dez had bought a Ditto looper which has been continually on loan to me to this day. It was the first song where I loop a few individual notes at the beginning and then build from there with a mixture of chords and melodies over that.

On Kris's initiative we all went down the street one rehearsal night to record at Joe Turner's studio. I think we only did two takes at the most...we were really of the hive mind...from there we ended up with what became our first single with both a six minute version and a twelve minute extended version.

Incidentally we were so stoked after that recording session that a crazed VN message thread ensued later that night with one bizarre gif after another illustrating aforementioned stokedness. Good times!

Snow King is still one of the most dynamic and fun songs for us to play live, as a closer.

DD: “Set a fire / you’re such a liar / take me higher / I’m so wired.” Sky is falling, i’m gonna crash, crash, crash, crash crash!”
Pure improvisation of the soul, pray to the noise Gods and Goddesses, there is no such thing as perfection! Turn up the volume!

I love this song -- cosmic raw energy, beating the groove in the key of E. It is about fire, letting go, transforming self. This song was done in 2 takes. For the most part i never plan what i will play only listen through the heart. Psycho guitar strumming, beat beat drumming, go deep, a magical journey. The use of sustain she is not tame, angelic harmonics, snapping thunder, volcanic desire, Snow King.
*
*
*
Thanks