Slow Wave with PVLSR - An Interview 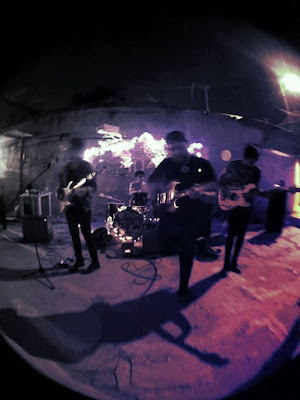 
Q. When did PVLSR start? Tell us about the history...
A. PVLSR started in 2013 in Leon, Mexico, with the brothers Humberto and Benny. Humberto on vocals and guitar, Benny on guitar, then Amadeus on bass and currently Manzana on drums. We had difficulties with the drummers, we hate them, haha, but we love Manzana, it's a blessing.
Decided not to play "covers" we started to create our own songs, originally they were only instrumental and in 2016 we formalized the band, Humberto composed the lyrics and recorded our first demo called "Hold me" in September of that same year, we uploaded it to SoundCloud and liked the local people.

We dedicate ourselves to perfecting the songs and we debuted in January of 2017 in Guanajuato a city close to ours, we had afterwards several presentations in other nearby cities and in ours from January to June.

In July we decided to record our first EP titled "Desolation" which will include 7 tracks including "Black and white" that we just released this September 30 and a remake of our demo "Hold me". We plan to release the EP in early 2018.

Q: Who are your influences?
A. Well, we are all influenced by bands of post-punk, shoegaze, dream pop and garage like: Beach Fossils, Beach House, The Cure, Motorama, Soviet Soviet, Cocteau Twins, Slowdive, Jaded Juice Riders, Blank Dogs. I think these bands are our biggest influence, we admire their work a lot. Although we also listen to and are inspired by the classic post-punk and dream pop bands like The Smiths, Jesus and Mary Chain.

Q. Make a list of 5 albums of all time ...
A. The order does not matter, but for us they would be these:
1- In Rainbows - Radiohead
2- Loveless - My Bloody Valentine
3- Girlflight - Jaded Juice Riders
4- Alps - Motorama
5- Total Life Forever - Foals

Q. How do you feel playing live?
A. To play live is our best experiences, the feeling of freedom, interaction with people, see how they enjoy what we do is undoubtedly the best of live play.

Always nervous, always thinking and hoping to give the best of us up on stage every show.
It is one of the greatest pleasures to do what you like, and the public enjoy it.


We always end up exhausted by moving on the stage, jumping, dancing, pulling, going down with the audience, chanting our songs is somewhat exhausting because we certainly do it with a lot of energy, with all our strength, we always end up drenched in sweat, with our arms and legs tired and throat, sometimes breaking the strings of the guitar and on one occasion breaking the guitar, and seeing how people respond to your energy motivates you to give more and more and at the end of the show and people applaud, excited, is the best thing that can happen to you. That feels to play live.


Q. how do you described pvlsr sounds?
A. Much reverb, energy and melancholy. We like clean guitar sound, we love the sound of excessive reverb, the sound of the chorus, rhythms faster than make you move and dance and we combine that to create our own sound, our identity.

Q: Tell us about the process of recording the songs?
A. The truth, it's hard, we know as it sounds in our mind, but explain producer as we want to sound that's what complicated: "put more reverb", "a little less to the battery", "a little less to the voice", "put more to the other guitar", are some things that tell him. It is also a little slow because we don't you can go all the same day to studio, so one day we recorded bass, guitar and battery, and other day voice and the other guitar. Sometimes we do not like as is some line and we return to record it again. Hear ourselves there in the studio always we fill of new ideas, and is the process.

Q. Which new bands do you recommend?
A. Okay, Clan de Venus, DUVVII, San Charbel, PVLSR haha. Should listen them.

Q. Which band would you love to made to cover version of?
A. Alison - Slowdive, no doubt.

Q. What are your plans for the future?
A. Able to carry our music to different parts of the world, record new material and find happiness.