Chain Up the Sun with Neaux - An Interview 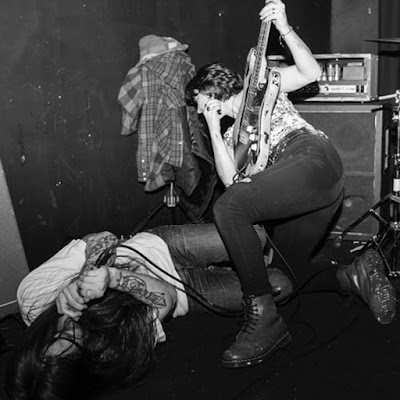 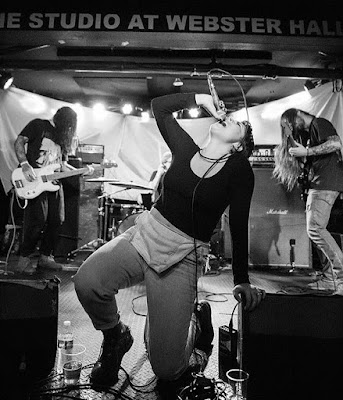 Q. When did Neaux start? Tell us about the history...
Neaux kind of started out of coincidence honestly. I had a previous band fall through and was sitting on a bunch of riffs and song ideas that I felt could potentially be turned into a new group. When I thought about who would sound over the songs I imagined a female voice best fitting the vibe. My first move to was to hit up Sierra and just ask if she'd be into doing a band. The terms were pretty open and I didn't really want any restrictions to be involved. Her response was positive and she asked to hear some of the ideas I had, so I sent her about 22 rough songs. From there we kind of just went with the flow and decided to record. In the span of 2 or 3 months we recorded about 25 songs. So far only 17 of those songs have been released. It's been fun and easy and hopefully it continues down the same path.

Q: Who are your influences?
My influences are pretty wide spread and I like to pull inspiration from all aspects of music. It may not seem like it when you listen to the band but there's hints of all genres in there. People tend to label us a "shoegaze" band or say we have a "grunge" vibe and that's perfectly normal to try and box a certain sound in but I like to think we embody lots of different sounds. There's pieces of hardcore, punk, noise, no wave, shoegaze, electronics, southern rock, brit pop and so much more mixed into a wild ride. Personally I think we sound like Nebula and Sonic Youth decided to get on stage and cover Cardigans songs. But then again I could be totally wrong.

Q. Make a list of 5 albums of all time…
This is tough because I feel like anyone who has to answer this question always feels like they leave a crucial record out. I couldn't particularly name 5 but as of right now I could say that if I had to go to deserted island and could only bring 5 records it would be:

1. The Allman Brothers - Live at the Filmore East - One of the greatest band in the history of music.

2. Neil Young - Everybody Knows This Is Nowhere - One of the greatest humans in the history of music.

3. Laughing Hyenas - You Can't Pray a Lie - Proved you could come from a hardcore band and not lose your identity even if the music didn't match the vocal style. John Brannon is a legend.

4. Spacemen 3 - Anything by them because there's so much good material from them.

5. Sonic Youth - Dirty - It's not SY's best record but it has a lot of my favorite moments.

Q. How do you feel playing live?
For me personally, playing live is the best part about being in a band. Writing and recording songs is cool but there's nothing like turning your amp up super loud and just having a blast. Sometimes people in bands get too concerned with how they'll come off to the watching audience so they might dial things back or just concentrate real hard on nailing every single proper note, but sadly that isn't me. I'm more from the school of let the music take over and live in the moment for as long you get. Sometimes you'll sound bad and sometimes you're going to sound amazing but it's the experience that matters. Never try and please someone else when it comes to expressing yourself. If your concerns are about the listener then you're missing the point in making music. It's not about acceptance per say but more about expression.

Q. How do you describe Neaux sounds?
Chaotic but beautiful. Hectic but maintained. Blown out, super loud rock music played by people who get it. Our sound is obtuse in a way because some people hear one thing and others hear something different. To me that is awesome because it should appeal to any and everyone based on what they're getting out of it. Once the music gets put forth into the world it's not longer ours to decide what people take from it. It takes on a different life depending on who's listening.

Q: Tell us about the process of recording the songs ?
Recording was simple. My friend Tyler has a home studio and is pretty knowledgable in terms of recording and also he rips on guitar. I went to him with the songs and said here's what I got and he just said, "Let's go for it." That's pretty much what we did. I didn't really overthink anything and just went with any and all ideas I had while recording. The songs aren't supposed to be perfect or well produced, they're supposed to be a snapshot of what's inside my head at the times of writing and recording. We have two records out and I think people can find different things amongst both records but also there's a connective tissue that runs through both of them.


Q. Which new bands do you recommend?
There's tons of new bands that pop up every single day, every single hour probably. We're still relatively a new band so listen to us but here's 10 off the top of my head.

Q: Which band would you love to made a cover version of?
I've had ideas run through my head of doing covers of loads of things. I always come up with weird ones and then figure out how to pull it off but then forget about it if we don't try it. I've toyed with the idea of us covering a Negative Approach song. Also thought it would be cool to cover a Spacemen 3 song. Or maybe a Kyuss song. I like when bands step outside their comfort zones to cover a song, whether to pay homage or to completely make it their own. Maybe we'll try something in the near future and just throw it out there as a secret track of sorts.

Q: What are your plans for the future?
The future is unpredictable. I like to think that my friends and I will be making music in one way, shape or form. Neaux is an easy vibe to connect to so we will see where things go and try to reach as many people's ears as possible. I like the thought of taking Neuax to every place possible, whether that be in the live setting and playing shows or just stretching our musical boundaries and writing and releasing loads of material. Being in a band is a journey that has its ups and downs and the ability to ride them out and see where you end up is the fun part. But all I hope for in the future is to still be inspired to write and make music.

Q: Any parting words?
Grab a guitar. Convince your friends to join you. Everyone grow your hair out and make lots of noise. Don't be discouraged by others, play what you want and with who you want. Listen to more Laughing Hyenas.
*
*
*
Thanks