Something Pale with Dopedrone - An Interview 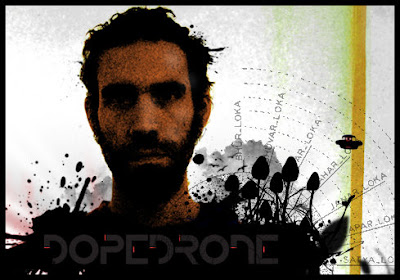 Q: When did Dopedrone start? Tell us about the history...
A: It's a long story that goes back to the 90's, when I played drums in various bands doing death metal, grunge and stoner rock. A Slowdive concert in Oslo '94 had a huge impact on me, and their sound has been an influence ever since. I was later also heavily into genres as doom, drone, sludge, prog-rock, post-rock, 60's psychedelia, noise, ambient, electronica and god knows what else. I began pondering how it would be to create a kind of fusion between heavy downtuned guitars/drones and brighter shoegaze type melodies and sound, but without it necessarily sounding like metal. I remember telling a friend about my idea, and she said it would'nt work. I decided to go for my vision :).

I started Dopedrone in about year 2000, when I got my first PC. Because I did'nt have many instruments at the time, everything I made was done using an acoustic guitar, a mic, software synths and samples. The years passed by and in 2009 I was approached by Paralucid netlabel, and my first album "Contact Book" was released on archives.org for free. In 2010 I reased an ep "Inner Sanctuum" and the lp "Apokalupsis Eschaton", also on archives.org. Then I got busy in the band I play drums in called Yeti Island, while also working on a collaboration project with Jarek Leskiewizc from Naked on My Own and Opollo. This project later formed into the name Sunset Wrecks, which is still going strong to this day. With alot of work to do it would take some years before the next Dopedrone album was released in 2017. Sorry, I went a bit beyond the question hehe...

Q: Who are your influences?
A: My influences are too many to mention if I was to name all of them, but some of them are Slowdive, MBV, Motorpsycho, The Cure, King Crimson, Kyuss, Jesu. However I'm not trying to sound like any particular influence, and hopefully I have developed my own sound.

Q: How do you feel playing live?
A: Dopedrone is a pure studio project, and would be too complicated to do live. I do play live with Yeti Island tho, and I love doing it.

Q. How do you describe Dopedrone sounds?
A: The Dopedrone sounds are drenched in effects as echo, reverb and chorus on one side, and then you have the deep crunchy basses and guitars on the other side. I like to create textures and ambiences, and I use a lot of modulation to get "movement" in the sounds. The sounds can be quite raw and nasty aswell as lush and soft. Over the years I have also expanded my palette with analog synths and built a modular synth setup.


Q: Tell us about the process of recording the songs ?
A: I usually start out with recording a guitar melody, synthloop, ambient texture or a beat and work out the ideas from that. There is a lot of improvisation involved. Piece by piece I patch together parts til I have something I feel works. It's the way I have always done it. I tend to not follow any "rules" about how to shape a traditional song structure. Because this is a studio project I have no limits of how many tracks I use. The mixing process can get quite challenging with 40-50 tracks running.

Q. Which new bands do you recommend?
A: I don't get much time to check out new bands, but I try. Spotify discover, blogs (like this one) and FB groups are my friends here :). I can't recall what new bands I have discovered lately, but the last album I enjoyed was Godflesh - "A World Lit Only by Fire",heavier than ever, altho absolutely not a new band.

Q: Which band would you love to make a cover version of?
A: I have done a few covers in the past such as Slowdives "40 Days" and Johnny Cash's version of "Hurt", but they have not been released. Slowdive songs will always be on the list of covers I'd like to do more of, even if it's been done by many allready.

Q: What are your plans for the future?
A: My plans now are continueing work on new Sunset Wrecks material, and Yeti Island will be recording a new album soon. Dopedrone will have a little rest, but will be back later with new material for sure.

Q: Any parting words?
A: I'd just like to say thank you for the interview, it's been good, and keep on gazeing :)
*