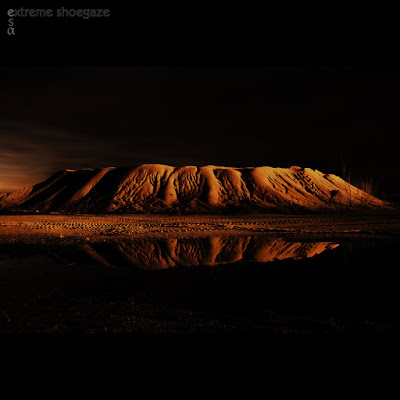 
Q. When did Extreme Shoegaze start? Tell us about the history...
Jimmy : First of all i should start saying that something tragic happened this summer. Our dear friend Pascal, former member of the band passed away at the end of june. There are millions of things to say about Pascal, about what a wonderful human being and fantastic artist he was but really for now i don't know what else to say here apart that we loved him and we miss him a lot. I met Pascal in the 90's... At that time i was playing in the shoegaze band Les Autres in Rennes and Pascal was playing in various noise bands in Nantes. The two cities are only distant from 100 kilometers. In 2004, we had the chance to play together in Nantes in the soprano section of Rhys Chatham ensemble for the re-creation of "An Angel Moves To Fast To see", a score for 100 electric guitars. We also often used to meet at Blockaus DY10, a scene for experimental music, mostly noise, based in an ancient nazi bunker in Nantes. Every friday there's an event there called Set 30' where bands play during 30 minutes. So in 2011 we teamed up with Camille on bass and started to write a 30 minutes long piece which is now released as ES1 in digital on Ovvk Recordings.

Q: Who are your influences?
Jimmy : I think it depends on the recordings we made. ES1 was sounding a bit like Slowdive meeting Neu!. ES Alpha is more strongly influenced by some My bloody Valentine tracks like "Glider" or "2" which is a rare track Kevin Shields made for a contemporary ballet. While the next ES2 will be a kind of mix of Experimental Audio Research and early Labradford and ES3 even more MBVesque with also a Sonic Youth feel.

Q. How do you feel playing live?
Jimmy : I never felt cumfortable with the idea of playing live and usually don't enjoy live sound that much even when i'm going to see other bands playing live. I usually enjoy much more listening to studio recordings. I don't think Pascal was very cumfortable playing live either but i guess that for us three, playing live consists mostly on focusing on our pedals and fretboard :)


Q. How do you describe Extreme Shoegaze sounds?
That's the big question because i often wondered what made Pascal, Camille and I link so closely on music tastes. I think the answer is quite complex and it's all about intervals and partial harmonics. In most of the music we like there's a consideration for intervals. I could give you 4 examples. For instance when Kevin Shields twists the vibrato arm of his guitar, he reaches partial harmonics which are somewhere in the semi-tones. It's very well explained by Brian Reitzell in the documentary "Beautiful Noise" when he speaks about "ghost notes" on "Loveless". The same thing happens in Boards Of Canada's works when they pitch bend keyboards notes but mainly when they transfer eveything on tape and end up with this tape wow effect and a tape saturation that adds harmonics. Again the same thing happens in guitar ensembles because in a "classic band" when you tune 2 or 3 guitars you have a quite big probability to be right in tune. But when you work with 10, 20, 50 or 100 guitars like Glenn Branca and Rhys Chatham do, there's an addition of very little tuning differences wich make the ghost notes come out. And the last example i'd have would be ragas in hindustani's music, that music which influenced La Monte young and Terry Riley. In that kind of music there is an instrument usually the voice "jamming" with commas, small intervalls inside a semi-tone. I'd recommand to every shoegaze fan to listen to Pandit Pran Nath, i'm quite sure they would enjoy the same feeling as listening to MBV. So yes, i think that since the beginning Extreme Shoegaze was dealing with that but not counsciously. I also thinks that partial harmonics activate some unuasual zones in the human brain but i have no evidences of that :) We also enjoy the idea that listening to Extreme Shoegaze, people would experience a kind of immersion into the sound. Camille has that word "amniotic" that works well to describe that effect we're trying to reach.

Q: Tell us about the process of recording the songs ?
ES1 was a different process then the other recordings yet to be released. Camille was with us in Nantes before moving to Paris and we wrote that one mainly by jamming in rehearsals. All other compositions have been built on a main harmonic grid that Pascal, Camille or I would bring.

Q. Which new bands do you recommend?
I'm not an expert in new bands but i like "The Virgance" and "Belong" a lot. Also Pinkshynyultrablast and Pia Fraus but are they really that new ? :)

Q: Which band would you love to made a cover version of?
Camille : Spacemen, Babylon Zoo. Jimmy : I'm not a big fan of covers. But if i had to make one, i would rather focused on an unreleased song or demo. For instance i had the chance to listen to what is i believe the missing track of New Order's Western Works Demos and sung by Stephen Morris. It's a very nice slow-mid tempo song in the mood of their song "Lonesome Tonight". There's also this unreleased song You Will Be Up There by The Wedding Present from their early demos, very post-punk, very fast guitars :)


Q: What are your plans for the future?
I'd like to highlight Pascal's solo project "Aalpes" because he and his music simply deserved it so much. I know he was working on a LP and i'd like to release it on Ovvk Recordings someday. There are 2 more "LP's" of Extreme Shoegaze yet to be released. They are actually two 30 minutes long pieces. But i will now mainly focus on An Ocean Of Embers, my new project which consists in a more classical form of shoegaze with a female singer, Elsa, on vocals. An Ocean Of Embers will be mostly influenced by My Bloody Valentine so focusing more on the noisy aspects of shoegaze than on the dream pop subgenre. And Camille is already playing with the brilliant band "Crème Fouettée" from Paris.

Q: Any parting words?
Not really, i think i've been talkative enough :)
*
*
*
Thanks