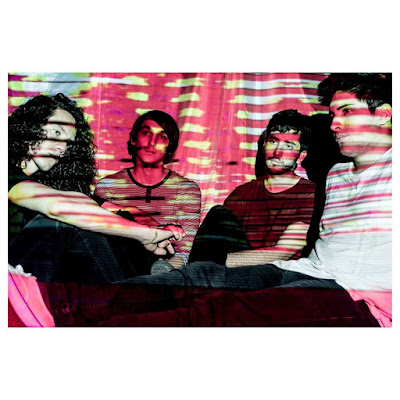 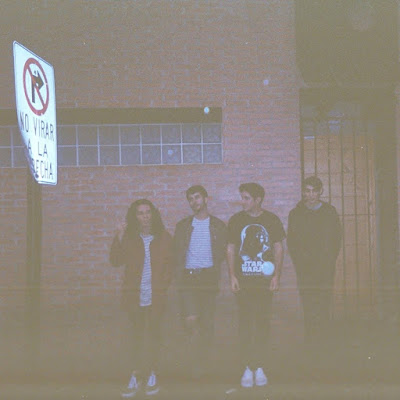 Q. When did Dylan Thomas start? Tell us about the history...
Diego: Everything started with our former bassist and Jan (guitar & vocals). They were classmates at high school and they used to play at Jan’s house, but not as a real band. Then, in December 2015, I was contacted being just a beginner drummer (which was kind of risky) by the former bassist on the closing party of a very well known venue in San José (for the indie/alternative community at least). We barely knew each other, but I accepted to rehearse with them. Two weeks later we recorded a demo called “Solo en San José”, which was released in january 13th, and then played our first show on February 11th.

After that, we played several shows in 2016. A second guitarist played two gigs with the band but then left. I used to play with Sebastián (current guitarist) in another band, so I invited him to join us and he accepted. “Suceso en la Plaza” (first EP), started being recorded in September 2016 and was finished by March of this year. Through the recording process, Esteban (current bassist) made a documentary about and due to that he learned all the songs from the “EP” on guitar. After the former bassist left the band, we asked him to join right around May I think. And that’s how we all got together.

Q: Who are your influences?
All: Beach Fossils, Sonic Youth, Astrobrite, Deerhunter, DIIV, Bored Nothing, A Place To Bury Strangers, LSD and the Search of God, Pavement, Girls and My Bloody Valentine.

Sebas:
Exploding Head - A Place to bury strangers
Midnight Cleaners - The Cleaners from Venus
I Had the blues but I shook them loose - Bombay bicycle club
Daydream Nation -Sonic Youth
Three imaginary boys - The Cure

Diego:
Not really an album person.

Q. How do you feel playing live?
Jan: We really enjoy playing live although we are kind of shy and we hardly ever interact with the audience. Lately people has started moshing at our shows, which we enjoy a lot, especially when we play without a stage (like in house shows) because you get sucked into the pit while playing or pushed onto the drum kit or that kind of stuff...and that’s really cool.

Q. How do you describe Dylan Thomas sounds?
Sebas: The appropriate description of our sound is Shoegaze/Noise pop. We like to make our music in a simple way adding catchy melodies, trying to make it easy to listen and enjoyable while at the same time trying not to (due to feedback and weird effect noises). We are also more interested on transmitting emotions rather than a concrete message in our songs.


Q: Tell us about the process of recording the songs ?
Diego: It was quite fun and educational for all of us. We recorded the songs with Oscar Herrera (he also mixed the tracks and mastered the record), which was an amazing decision, because he really understood what we were looking for with the sound and really helped us to achieve that.

Q. Which new bands do you recommend?
Jan: At the moment there is a small shoegaze scene in Costa Rica that’s just starting to develop. Some of our favorite bands at the moment are: Queridos Edificios, Sway, Kibbo Kift and Caidas Libres. Most of those bands were formed this year and are really great.

Q: Which band would you love to made a cover version of?
Jan: I think it would be nice to cover anything by The Beach Boys. Maybe an instrumental one since I don’t know how to sing properly.

Q: What are your plans for the future?
Diego: We hope to play in new places, it could be very fun being able to travel and play at the same time. We also want to record an LP, but it doesn’t have date yet. In general, we just want to keep playing and having fun.