Ground with Pesk - An Interview 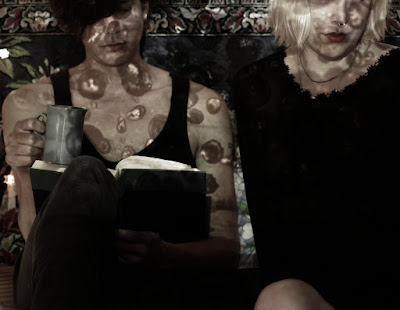 
Q. When did Pesk start? Tell us about the history...
Pesk is composed of Amee and Rafferty. We got married in 2012 and conceived Pesk in 2014 after we stopped moving around for long enough to set up our instruments.

Q: Who are your influences?
More than any particular individual or band our songs are influenced by the other things that take up space in our minds and lives; politics, social dynamics, weather, the natural world, inner struggles and triumphs…

Q. Make a list of 5 albums of all time…
The 5 albums we have listened to the most together would probably be:

Q. How do you feel playing live?
It depends. Usually pretty nervous but our shows tend to be intimate and well received which feels really nice.

Q. How do you describe Pesk sounds?
We sound like spending winter at the bottom of a troubled world. If pressed to relate this to other bands it'd be something like Varg Vikernes arguing with Nico in Trent Reznor's kitchen after everyone else has gone home.

Q: Tell us about the process of recording the songs ?
Our songs were recorded, mixed and mastered by Nick Graham at The Attic in Dunedin, New Zealand. Amee was heavily pregnant so there was a sense of urgency about the process, which perhaps gives a rawness to some parts. Also holding the guitar was tricky. Despite this it went pretty smoothly and we were really pleased with how it turned out.

Q. Which new bands do you recommend?
We are spoilt for excellent local bands at them moment - Death and The Maiden, Élan Vital, Strange Harvest, Waterfalls, and Motte are all worth checking out.

Q: Which band would you love to made a cover version of?
I think it would be fun to do stripped back, industrial covers of classical pieces.

Q: What are your plans for the future?
We are pretty focussed on being parents and other life commitments, so we are having a musical hiatus for the time being.