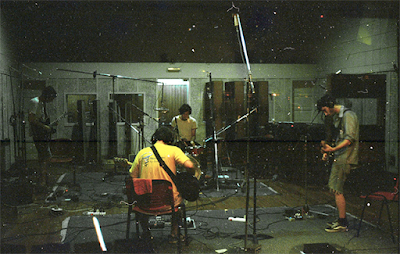 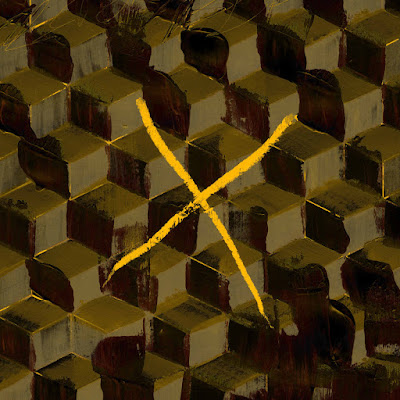 Q. When did La Suma de Todos los Tiempos start? Tell us about the history...
We started La Suma de Todos Los Tiempos in 2010 under the name “Infinitas Aves”. On that days we were a three piece band formed by Fernando Turenne in the drums and two guitars ( Diego Litwiller and Enrique Gil Navarro), we were joined later by Gonz Tello in the bass and with that line-up we started playing live. For our first record (La Suma De todos Los Tiempos, 2012 released by Discos Dojo) we returned to the trio but in 2013 we were joined on bass by El Petta D’Agostino, we met him because he runs a rehearsal space called Molloko Vellocet Estudios in our neighborhood Parque Patricios in Buenos Aires. We have been playing and recording with that line-up since then.

Q: Who are your influences?
We have many influences. We like many bands in common but also have very different musical taste. Anyway we all agree on the importance of the melodies, we don’t have any prejudice when listening to music. In that way we tried to listen as much as we can but what we most enjoy are the pop tunes and the versatility of the post-punk.

Q. Make a list of 5 albuns of all time… .
That is a tough question but I think we would go for:
The White Album- The Beatles.
The Velvet Underground and Nico- The Velvet Underground
Dia de los Muertos- El Mato a un Policia motorizado
Weird Era cont- Deerhunter
Playing with Fire- Spacemen 3

Q. How do you feel playing live?
Playing live it’s a special moment for us; share that moment as a band and with our audience is like a religious experience.

Q. How do you describe La Suma de Todos los Tiempos sounds?
I think that our sound is based on melodies but also on experimentation, we switch from melody to experimentation constantly. Our aim is always to try new things, extend our sources and sounds, taking risks and enjoying it as much as possible.


Q: Tell us about the process of recording the songs?
So far, the three records we have released were made in different ways. For “La Suma De Todos Los Tiempos” (2012), we devote ourselves to rehearse, on those rehearsals, we refined the songs and then we started recording each instrument separately. The second album “Grandes Distancias” (2015), was recorded alive, the four of us playing at the same time, as in the first one, but the songs took their definitive shape on those recordings. For this new album ”El Futuro Para Siempre” the writing process was done mostly during the pre-production that we made with Estanislao Lopez, this was the first time we worked with a sound engineer recording and mixing, so in that sense I think that this record is closer to the idea of “what we wanted to do” in the previous ones, as those were mostly guided by the impulse. This new albums will be released through Casa del Puente Discos (CD/Digital) and Hallo Discos (cassete)

Q. Which new bands do you recommend?
From here in Argentina we would recommend Atrás Hay Truenos, Medalla Milagrosa, La Gran Perdida de Energia and Verde y los Caballos a Marte. We also like many underground bands from sudamerica like Columpios al Suelo, Alucinaciones en Familia, Maifersoni, Patio Solar and Julen y la Gente Sola and regarding international bands I would said that Deerhunter and Wavves are our favorite ones.

Q: Which band would you love to made a cover version of?
We would like to cover any song from Maria Elena Walsh, Tanguito or Pescado Rabioso. A Spacemen 3 cover would be definitively a must.

Q: What are your plans for the future?
We will be presenting our third record “El Futuro Para Siempre” on july 29th in Niceto Club in Buenos Aires, that day the CD release will be available for the first time through Casa del Puente Discos. We hope to play in the inner cities of Argentina this year, also in other South American countries. Another video clip is also on the plans.

Q: Any parting words?
Thanks for the interview Renato, we hope you enjoy our music.
*
*
*
Thanks