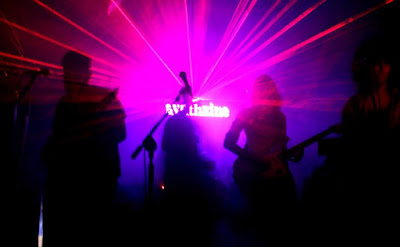 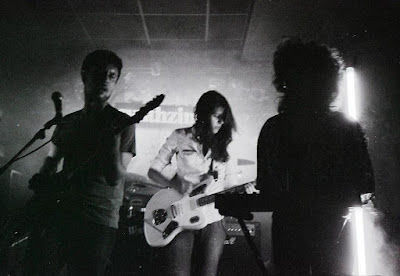 Q. When did Nueva Internacional start? Tell us about the history...
We started in later 2013 as a two-man recording band. We played in several bands before but we never recorded anything, so we started the band to do a couple songs and share them on the internet. Some people liked the songs and asked us to play live, so we started looking for people top lay with us and complete the band. Now we are a band with five members on it.

Q: Who are your influences?
Related to the band’s sound, the main influences are classic shoegazing bands, especially My Bloody Valentin, as well as new shoegaze acts as Ringo Deathstarr or The Pains Of Being Pure At Heart. Another band we think about when we are composing the songs is The Horrors, the keyboard parts are awesome and the sound is just perfect. Refering to the lyrics, we like several spanish bands as Los Planetas, Nueva Vulcano or The New Raemon.

Q. How do you feel playing live?
A little nervous before we go out, I think like the rest of the bands. Then we start to play, and it feels amazing: relaxing, envolving like a trance. We usually don't speak between songs or between each other, most of times are all looks between us and 'gaze at our shoes' Always we have the feeling that the live happens so fast.


Q. How do you describe Nueva Internacional sounds?
Noise, voices hidden behind layers of reverb and synths is our formula. We want to create an atmosphere of relaxing noise while in live we want to create a powerful wall of noise that that strikes the viewer

Q. Which new bands do you recommended?
To be honnest, most of the band we listen are spanish bands. There are several interesting artists nowadays in Spain. We recommend, for example Ghost Transmission from Valencia, a band based in Madrid called Role, Triangulo de amor Bizarro and one of our fauvorite spanish bands, El Último Vecino.

Q: Which bands would you love to make a cover version of?
We have already made an acoustic cover of My Bloody Valentine’s Loomer. We would also like to cover New Order’s Age Of Consent and any of the songs on El Último Vecino’s debut album.

Q: What´s the plan for the future....
We have just released our first album which took us a lot of time to record, so we are a little bit exhausted to think in a new album. We would probably release single songs and do some gigs around Spain, maybe some festival during the summer.

Q: Any parting words?
Thank you for the interview, and we hope to make a visit to Brazil someday
*
*
*
Thanks