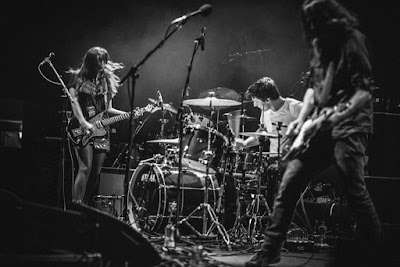 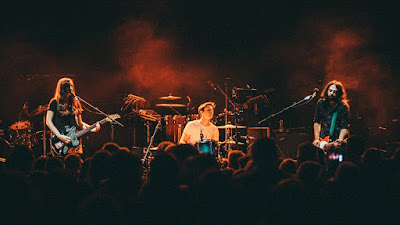 Q. When did Thought Forms start? Tell us about the history...
Thought Forms began in 2004 - a good friend of mine from school, Emily, played drums and she put an advert on a local music forum to find musicians to start a band with. This guy called Deej replied.

I’d seen him around - he was the pretty Indian boy who worked at Blockbusters and I’d heard through my then-boyfriend that he made really cool experimental films, so I took her up on her invitation to join them for a jam and we clicked straight away.
We had so much fun making noise together that afternoon in Emily’s bedroom… The connection we had was amazing and we were pretty much inseparable from that day on.

We started playing gigs locally and went out to the US for the first time in 2006 to play at Terrastock Festival but then Emily moved to Cardiff and left the band, so we asked this brilliant drummer if he’d join us… Guy Metcalfe… he was only 13 years old at the time, but he’d already been gigging locally for a few years. That’s how we knew of him - his band had supported us once and we were blown away by how good he was. And he was incredibly lovely. The three of us fit together really well. And that was that.

Q: Who are your influences?
We are influenced by everything that makes us feel. In terms of musicians, we’ve been lucky enough to work closely with some amazingly talented people who’ve been a huge positive influence on us. I think Warren Ellis is amazing.

Q. Make a list of 5 albums of all time…
That’s such a hard question… But… 5 perfect albums:

Q. How do you feel playing live?
We get really nervous beforehand… but it all melts away as soon as we start to play and we feel incredibly connected and lost in the sound.
It’s a powerful feeling.

Q. How do you describe Thought Forms sounds?
We're a rock band. We used to be mostly instrumental but now we have a lot of words.
People have said things like drone-rock-psych-grunge-noise-gaze.


Q: Tell us about the process of recording the songs?
With our first (2009’s self titled) album for Invada we went in and did the songs completely live.
But for the last two records (2013’s Ghost Mountain LP and 2014’s split LP with our friends Esben and the Witch) we took a different approach - for starters, we worked with an amazing producer, Jim Barr. So we had an outside influence and that was really refreshing. We focus a lot on refining the arrangements and adding subtle touches.

Q. Which new bands do you recommend?
Repo Man. They’re an amazing 4 piece band based in Bristol… drums, searing guitar, amazing bass groove and impassioned poetics interleaved with wonky violin and free sax… The energy between them onstage is completely captivating and the music is thrilling, vital extremely danceable. I love them. They got me excited about music again. Check out their last single, “Static Excess Strobe Effect”. https://youtu.be/wRp7sHtcNKo

Q: Which bands would you love to make a cover version of?
I have such a long list of songs I want to cover… Right now the top three are by Patsy Cline, Fleetwood Mac and Get The Blessing.

Q: What´s the plan for the future....
Release our new album in 2016 and tour, see as many places together as we possibly can.

Q: Any parting words?
Always take your time. Breathe.
And… Hopefully see you in Brazil someday. Thank you.
*
*
*
Thanks